Hi BioWare fans. Another Friday is upon us and we have another staff profile for our Facebook Friday blogs. This week, we peer deep into the soul of one of BioWare’s strangest creatures, the rare and effervescent “Stan Woo”. The Woo is a QA tester, ninja, singer, and spokesman for the Moose Jaw Tourism Bureau . Stan and I have worked together for a decade now (time flies when you have a ninja) and we take turns being each others side kick, getting into improbable adventures that usually result in us pulling the mask off the swamp monster to reveal it to be Old Man Horner. Anyways, that’s enough from me, I turn you over to the wit and wisdom of Stan Woo, QA ninja. 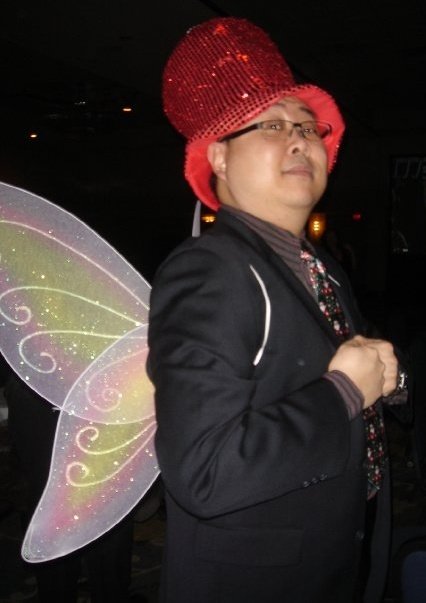 Name:
Stanley Woo aka QA Ninja aka the Worst Ninja Ever aka Wootabaga aka The Woo

Where are you from?
I was born and raised right here in Edmonton, Alberta.

Favorite movies:
The Star Wars trilogy that begins with A New Hope, Blazing Saddles, History of the World Part I, anything by Pixar, the Matrix trilogy that begins and ends with The Matrix, The Impostors, Inception, Big Fish, Spider-Man 2, Ong-Bak, Fifth Element, Iron Monkey, Wheels on Meals, Anchorman, District 9, Transformers: The Movie, The Karate Kid (original), Noises Off, Batman Begins, Memento, Scott Pilgrim vs. The World

How long have you worked for BioWare?
10 years in April. I was hired a couple of weeks after “Evil Chris” Priestly, and despite the occasional attempt on my life and the voodoo curses, he is still one of my closest friends here at the company. And he didn’t even have to pay me to say that.

What does a Quality Assurance Design Analyst actually do:
The QA department at BioWare is split up into two separate streams: tech and design. QA design analysts deal primarily with issues involving plot, dialogue, characters, cinematics, story flow, and above all, fun.

What is your average day like at the office?
We’re assigned certain plots to be “experts” in, so we have to play them as much as we can. While playing, we look for obvious problems such as crashes, plot flow problems, and holes in levels, as well as more subtle problems like journals not updating when they’re supposed to or a discrepancy between the voice-over and the text or a very specific way of playing through the plot that prevents it from being completed.

While we’re playing our plots, we’re also keeping track of whether that plot is on track to be completed and polished according to our schedule, so we’re filling out checklists, talking to the designers working on our plots, clarifying certain story elements with the writers, or checking in with producers to see when certain assets are expected to appear in the game. 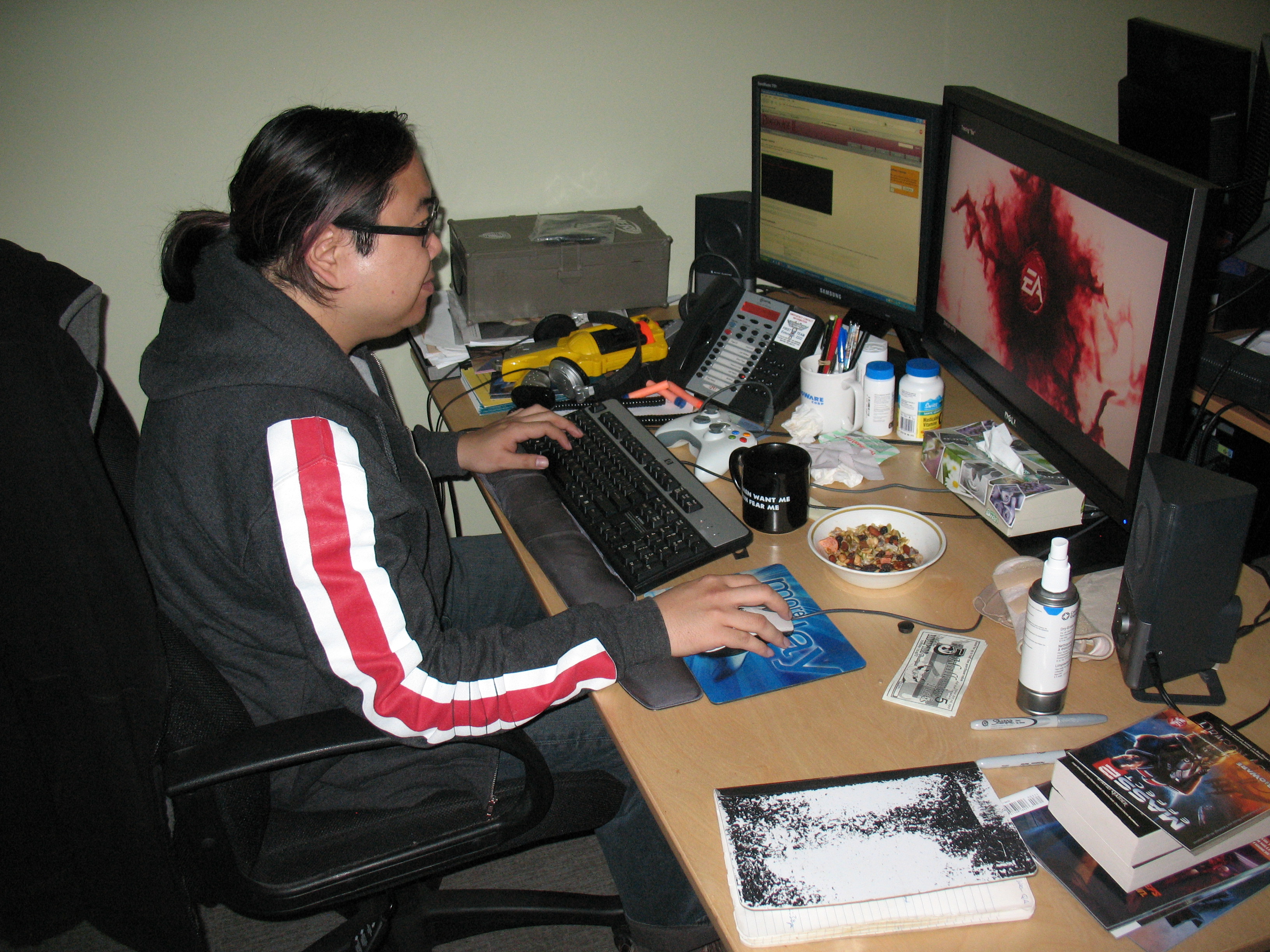 There are a couple of new tasks for design QA this time around. One is content submissions for the ESRB (Entertainment Software Ratings Board). We go through our plots and detail anything that might require some kind of content warning like you see on games sitting on store shelves—things like swearing, different kinds of violence, innuendo, drug use or other criminal activity, and, of course, nudity and sexual content. This is one way the ESRB determines what kind of rating and content advisories the game gets.

The other new task for design QA—well, for me, really—is I get to help out the translators for our game. Any questions the translators have about context or noun genders or about the speaker or listener of a line comes to me first. I answer the questions as best I can, and anything I can’t answer goes to our Editors. It’s quite a lot of fun seeing what kinds of issues come up when someone is reading and translating our dialogue and text with a lot of the context removed.
And finally, whenever I have a few moments to spare, I also like peeking in on the BioWare Social Network to see if anything needs moderating, as I am also a BioWare online community moderator.

Favorite BioWare moment Game related/thing you are most proud of at BioWare:
Dragon Age: Origins was the game that made me the proudest I’ve ever been as a BioWarian. It was a huge project, one I worked on for 2 ½ years, and to see the critical and commercial success of that game makes me very happy. Having been at BioWare through both good (parties, events, nacho day) and not so good (crunch time, deadlines) times, through big (hello Electronic Arts!) and not so big (vending machine chocolate is $1.25 now?) announcements, nothing made me feel as good as seeing Dragon Age: Origins succeed and become such a big hit. 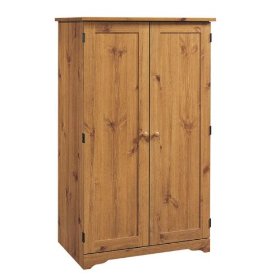 Back in the days of Neverwinter Nights, we were working many long days, far into the night. Back then, the entire QA department was stuffed into a single room with all its multiple computers and monitors and consoles and televisions. Plus an army of powered fans. Plus a Habitrail of A/C ducting made entirely of recycling bags and coat hangers. It was a very warm place to work. Anyway, late one night, QA updated to a game build that rendered the starting area as a rainy, 2×2 grass field with the player and an armoire on it. Every area we tried to jump to had the same 2×2 grass field and the same armoire.

So QA went investigating to see if every area of the game was the same way, and every time it came up, we would shout “Armoire!” Next area? “Armoire!” The next? “Armoire!” I think at one point, we were on speakerphone with Programming, who’d hear the occasional “Armoire!” joyously shouted in the background. While Programming fixed the issue and assembled another build for us, we in QA decided to take a break and walk a few blocks to the 7-11. There we were, a half-dozen giddy, sleep-deprived, insane-to-begin-with QA guys, traipsing down the street yelling “ARMOIRE!” at 2am. A police cruiser drove passed us a couple of times so we tried to keep it down to a dull roar.

To this day, though the number grows smaller and smaller with each passing year, you can still find the people who were there that night by checking their reaction when you yell “Armoire!”

What do you do to relax/do you have any hobbies:
Relax?! What’s that? I do have some things I do when not at work, if that’s what you mean. Besides not being able to play as many videogames as I’d like, I’m also unable to play as many board games, pen-and-paper RPGs, and Warhammer miniatures as I’d like. The Warhammer miniatures is a new (very expensive) hobby, so I’m hoping to get a lot of mileage out of it. 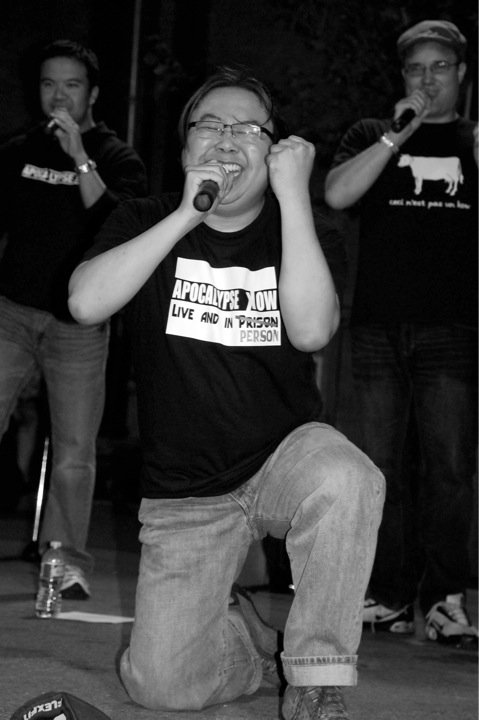 I sing in an a cappella group called Apocalypse Kow, so that takes up a lot of time. We do the occasional conference or wedding or non-profit event, but our main performing season is during the Edmonton Fringe Festival in August, where we sing every day of the 10-day festival. I also enjoy getting involved in theater. My last show was in December (a farce), and I’m hoping to audition for a couple more show this spring. While theater can be stressful, it’s a fun kind of stressful that’s negated by all the applause, anyway.

What game are you losing sleep for right now (that you are not working on)?
Lord of the Rings Online went free-to-play recently, so I’m getting back into that. I played for a while when the game was new, but with all the other games and MMOs coming out, it’s impossible to keep one for very long. Not if you want o see what else is out there, anyway. But now that it’s free, my roommates have picked it up, so getting a group together won’t be as difficult anymore. Aside from that, I’ve discovered that you can spend a surprising amount of time on Facebook games, too.

I am a little concerned about a few games coming up that will take up a huge chunk of my life, though. Fallout: New Vegas, BioShock Infinite, Civ 5, and DC Universe Online are all games I want to play the bejeebers out of.

What is the most “nerdy” thing about you?
Aside from all my geeky interests and hobbies and working for a videogame developer, you mean? Well, how about Pure Speculation? The Pure Speculation Festival is Edmonton’s annual science-fiction and festival. We bring in special guests from all different worlds of geekery, have a complete schedule of panels, presentations, and discussions, hold costume contests and charity auctions, and have all manner of fun times in October. Previous guests of honour for the festival include author Robert J. Sawyer, game designer Monte Cook, and television producer/writer/actor Rick Green. The 2010 Festival includes author Tanya Huff, a musical based on a Robert J. Sawyer book, the Aurora Awards, a nanotechnologist, live-action role-players, and lots more!

Of course I have to hype it. Not only do I sit on the board for the Pure Speculation Festival society of Alberta, I have also been the festival’s Events Co-ordinator for the last few years.

Okay, still not nerdy enough? How about being part of the choir that has performed for Video Games Live! and Star Wars in Concert here in Edmonton?
No? How about appearing in Alina Pete’s Weregeek webcomic?

If you didn’t work in video games, what would you be doing?
I would more than likely be trying to eke out a living with acting, particularly voice acting. I’ve been acting since high school, and I’ve always been interested in the power of vocal communication, such as through theatre and singing. Voice acting seemed to be the next logical step. I’ve taken a couple of voice acting classes and have been told I have much potential in that field. Fortunately, or unfortunately, depending on how you look at it, I’ve never been able to pursue it full time because of my wonderful full-time day job here at BioWare Edmonton. I guess that also means I would be working somewhere else in the meantime in order to afford rent, food, and more voice acting classes.

What do you want people to know about you?
I am as much a presence online as offline. I’m not going to add random folks to my Facebook, but you can find me on Twitter (@worstninjaever) and my blog (http://worstninjaever.blogspot.com). I talk about all sorts of minutiae of daily life, but won’t be revealing any unannounced work secrets. Thank you, and be excellent to each other.
End of line.