Hello BioWare fans, and a Happy Halloween to you all. This week I wanted to do an interview with a Wolfman or some Creature from Beyond the Stars, but they aren’t on staff (yet). So instead, we have Fernando Melo. Fernando is the opposite of monstrous as he’s a great guy, but he does work as hard as 8 vampires and a Frankenstein. Fernando, among his many duties, is in charge of DLC plans for Dragon Age: Origins and is someone I enjoy going to conventions or events with (as seen below, he often takes the abuse in my stead). Anyways, that is enough from me, let’s hear from Fernando. 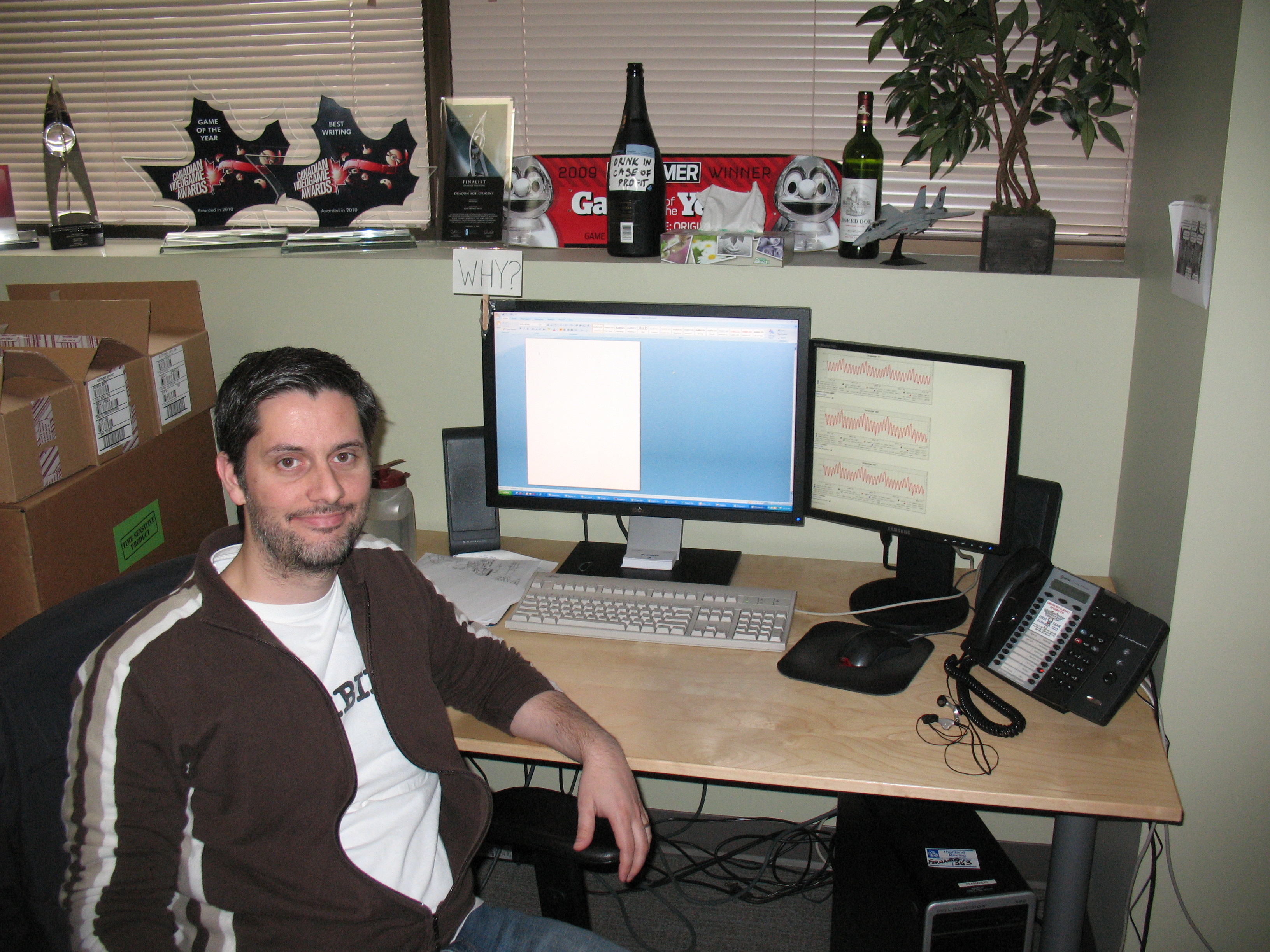 Where are you from?
I was born in Lisbon, Portugal. But my family moved to Canada when I was very young – I grew up in Toronto most of my life and consider that ‘home’.

Favorite movies:
Off the top of my head, if I knew I’d be stranded on an island (with a decent dvd player and big screen tv), I’d take with me… Star Wars V: Empire Strikes Back (all the cool stuff, without all the fuzzy furry stuff), Aliens (when you absolutely need to nuke something from orbit), Blade Runner (no other reason needed), The Matrix (skin tight vinyl & guns – lots of guns?! Yes please!), Airplane (not that I have a drinking problem), Peter Seller’s The Party (maybe not his most known, and possibly the most politically incorrect these days, but the waiter scene in that movie is probably still the most I’ve ever laughed watching a movie), Bruce Lee’s The Game of Death (where else will you find Bruce Lee, Chuck Norris, and Kareem! It’s like a triumvirate of awesome), Monty Python’s The Meaning Of Life (just be sure to hang on to your liver).

Favorite TV:
Usually I’ll get hooked on shows like 24, Lost and The Event – only to wonder what the heck is going on after missing a show here and there and ultimately give up until the box set is out. Occasionally I’ll watch something like Hell’s Kitchen for inspirational leadership techniques (joke). And having lived in the UK for 5 years I have a soft spot for british wit and comedy including older shows like Rowan Atkinson in the Black Adder series (beware the Spanish Inquisition!).

Favorite books:
Douglas Adams – Hitchhiker’s Guide to the Galaxy (42 is the answer, after all). William Gibson – Neuromancer, Mona Lisa Overdrive, and currently reading Spook Country (I noticed Jesse Houston already put Neuromancer out there – if you only read one of Gibson’s books, I’d start there). Donald Jack – Three Cheers for Me (second to Hitchhiker’s Guide, I don’t think I’ve ever laughed harder while reading a book).

Job or title at BioWare:
I’m a Senior Producer at BioWare. And I work as the Online Producer for the Dragon Age franchise.

How long have you worked for BioWare?
Just over 3 ½ years now.

What does a Senior Producer actually do?
As the Online Producer, I help define the online features of the DA games and how these may interact out of game with the community, as well as generally most things that happen after launch: This includes the plan for DLC and other items (everything from pre-order items to expansion packs), post launch patch support, and in the case of DA:O – the public toolset. I also work closely with the web team on the social site features, the community team to support our fans, and a lot of different EA teams and external partners like Microsoft and Sony to make sure everything from legal, servers, bandwidth, content, etc all meshes in some sort of happy state for our players.

Coffee. Check email, server traffic graphs, sales reports, social forums/PMs – usually undo whatever plan I had for today based off what new things may be on fire. Coffee. Daily DA2 play session with the senior leads – call out top issues for the day. Coffee. Then off to some stand-up meetings with some of the game teams. Coffee. Next deal with whatever needs attention – this can be a variety of things: meetings formal or impromptu, emails, phone calls, IM’s… try not to be too distracted by new incoming emails and calls (or adjust plan as needed). Coffee. Roll resistance check…fail…sneak a peek for any Steam deals today. Coffee. On a “light” day, actually do some proper work and catch up on documentation and feedback, non critical emails, review bugs, play the game and have lunch. On a “normal” day, usually I’m packed with meetings and conference calls – so scurry between these (with coffee runs in between), and gather up notes from all these throughout the day. Starting mid-afternoon, there is a similar daily ritual of meetings – a larger daily playthrough of DA2 open to anyone on the team where we pick up where we left off the character and call out issues as we go, followed by the daily bug triage with senior leads – a 1 hour fun-filled session of reviewing new change requests, new (and old) bugs, and breaking people’s dreams (sorry, no unicorns in DA). Coffee. Daily call with Victor Wachter on what’s happening on social & the community. It is now anywhere from 6-7pm – time to document all those notes from today’s meets, move calendar items around to make tomorrow pretend to be a reasonable day. Depending on the day – in the evening (after kids are in bed) pop by social and catch up on the PMs and forums, or play DA2, or play other games.

Favorite BioWare moment Game related/thing you are most proud of at BioWare:
Hard to narrow that down. Prior to joining BioWare I was a fanboy because of the quality storytelling, memorable characters, and plot twists – I can’t think of any other game company that has consistently delivered on that across their games.

Favorite BioWare moment not game related:
I think the one thing that consistently impresses me most about BioWare (apart from its story telling) is its appetite to continue to evolve and improve its art form. It would be easy to knock out quick sequels or to rest on the prior successes – but just as there is a kind of unofficial quality bar that everyone instinctively attunes to, there’s this drive for not simply taking the easy road but rather to do the right thing. Having worked in different industries, game publishers and developers, for me this is one of the things I’m most proud of the folks here for (even if many of them don’t even realize it to be such a special thing).
What do you do to relax/do you have any hobbies: Most of my free time these days goes towards raising wife faction points as well as my kids. However, I love flying – and one day will continue my pilot’s license training – in the meantime however, I would say my main hobby is to fly the virtual skies on MS Flight Simulator or a variety of air combat sims. Whether other folks consider that relaxing or not is another story.

What game are you losing sleep for right now (that you are not working on)?
As things are ramping up for DA2 I’m finding less time to play other games – so currently my stack of ‘to play’ boxes is increasing. But on weekends and some evenings I have been playing Civ V, Medal of Honor, whatever oddities I pick up on steam sales, and all sorts of game demos.

What is the most “nerdy” thing about you?
I suppose I fall into two distinct “nerdy” camps – I’m a game (and particularly rpg) nerd, but also a bit of a plane geek. On the gaming side – I keep an old PC complete with DOS to play all my retro games on as they were meant to be played (although I also use DosBox emu on newer PC). On the plane side – I have detailed plans for one day taking over a small portion of our basement and building a home cockpit. 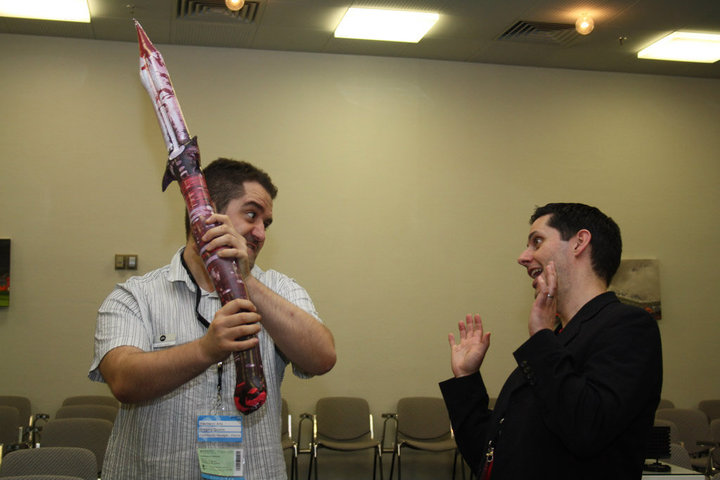 If you didn’t work in video games, what would you be doing?
Well, my first love was flying actually – the first thing I wanted to be when I grew up (I think I was 5) was a fighter pilot, and I got pretty close. I only discovered my love for computer games in my teens and ultimately deciding that’s what I wanted to do. So if I wasn’t working in video games I’d probably have been pursuing some kind of flying career. Although these days I keep telling myself I should just quit all technology and go plant potatoes somewhere.

What do you want people to know about you?
Not sure what else people would find interesting actually – I’ve been told I’m a fairly stereotypical Capricorn whatever that means. For the rest of us, I’m usually on social answering random threads and helping folks over PM – feel free to say hi. I can’t promise how quickly I can respond as it varies but do try to keep up at least weekly (although that may get worse closer to DA2 launch).

Other than that, I’m really proud of the work we did on Origins, Awakening and the DLCs – we certainly did stumble here and there along the way but we also learned a lot and I firmly believe DA2 will be all the better for it. In the meantime, if you haven’t already tried the additional content – have a look at the DAO Ultimate Edition we just released. This was something a lot of players were asking for throughout DAO’s DLC releases so I’m very pleased we were able to deliver this and at such an awesome price.

Lastly, I’ve had a few players asking about what happens between now and DA2 – hopefully we’ll have lots of DA2 goodness coming at them, but one thing I’m trying to spend more time on along with Victor Wachter and Chris Priestly who are llooking at DAO mods. If you’re on the PC, there are some pretty impressive community mods out (and a lot more blooming) so we’re going to see what we can do to help raise awareness for those but I’d highly recommend checking some out – start with the DAO General forum on the social site where a great thread exists on released player mods, or select Projects from the tabs at the top of the site and sort by popularity or recent updates.