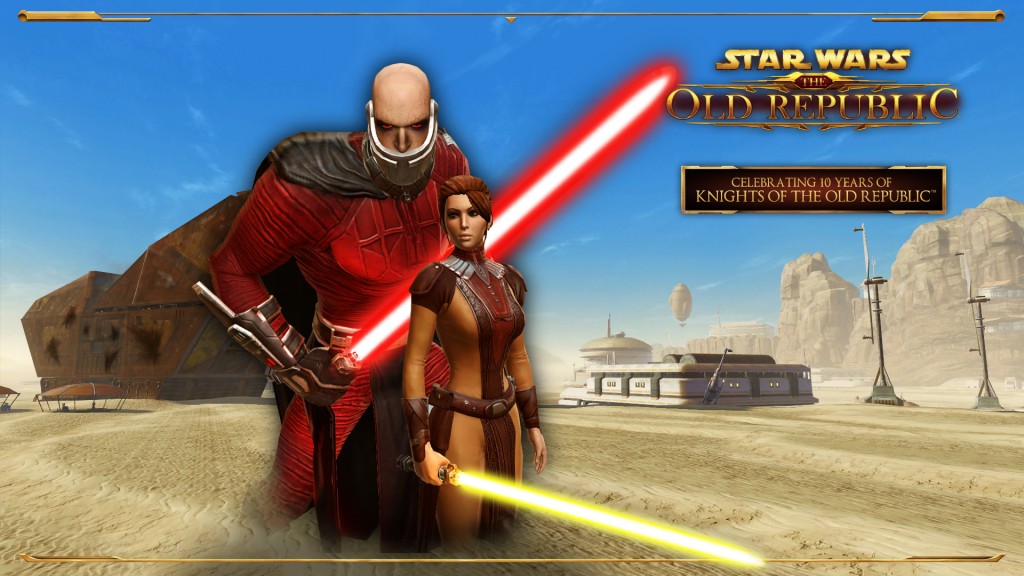 Today marks the tenth anniversary of Star Wars: Knights of the Old Republic and we’re ready to celebrate! We checked in with a few members from the old KotOR team and asked them to put aside their current projects for a bit and share their memories about working on the game.

I was actually working as a texture artist on Neverwinter Nights when I heard the news that we had secured the rights to do a Star Wars RPG game. Casey was offered the Producer role, but they still didn’t have an Art Director. Casey asked some of the concept artists if they wanted to draw some ideas for a new Star Wars IP. I decided to take a stab at it and ended up doing three pencil drawings of space ship designs. Casey liked what he saw and asked if I wanted to be the Art Director. I couldn’t believe it. I accepted, and then couldn’t sleep for two weeks stressing about how the hell I was going to do the job. The three ships made it into the final game; one of those was the Endar Spire “Hammerhead”.

I joined BioWare in 2002 after spending about nine years in corporate IT, and KotOR was the first game I worked on in the games industry so it holds a special meaning for me.  At the time, our company meetings were held in a small repertory theatre down the road from the studio, and all I remember is sitting there waiting for the meeting to start when suddenly that iconic music started to play.

As I watched the words “Star Wars: Knight of the Old Republic” crawl across the movie screen, I had the overwhelming realization that I had not only stumbled into my dream job, but my name was going to be associated with a franchise I’d been a fan of for almost 30 years.  The 7-year-old me never could have guessed that would be part of her future.

And while I’ve played the game many times over, the part that I remember best was Trask explaining how to get something out of my locker; I spent 3 weeks debugging issues in the tutorials and unfortunately that one scene is now permanently etched in my memory.  We’ll call that lesson #1 about the pitfalls of game development!

I was scattershot across KoTOR. I wrote bits of Taris, Manaan, Korriban, countless little scenes here and there, and about a jabillion lore bits and item descriptions. I actually really enjoy those because each one is a micro story, although I had to edit each and every one of them by hand every time the inventory system changed. I still twitch thinking about that.

But the main tasks I owned were writing all of Tatooine and Kashyyk. Blew. My. Mind. There I was, writing the early history of a setting I had grown up with. I went deep on all the lore I could find, seeding everything with as many hints forward as I could. That was the challenge, trying to create a history that could lead to the setting I had come to love.

Memories that stick out from Tatooine? HK-47’s audio-department-angering Sand People translations, characterizing Jawas, force-commanding a guy to never speak to the player ever again. I also remember one late night blearily writing “Nobody expects the bantha’s in position,” for which I am equal parts proud and sorry.

On Kashyyk, I remember writing Jolee Bindo’s grumpy intro, Zaalbar’s Shakespearean family issues, and trying to rationalize flora and fauna super-growth. I still have my cheat sheet with the R-laden names of many, many chatty wookies. Again, proud and sorry.

But I remember one moment very clearly. It was the day we secured the license, for certain, 100% the papers are signed and it’s a go. We gathered in a local theater for a company meeting, and up on the screen came the BioWare logo and the Star Wars logo. Pause. And then, it started. Of course it started, you couldn’t stop it. A room full of suddenly-children all humming the Imperial March.

One day my son will be old enough to understand that daddy got to make Star Wars, and it was good.

Join in the celebration with us and download these commemorative Knights of the Old Republic wallpapers!