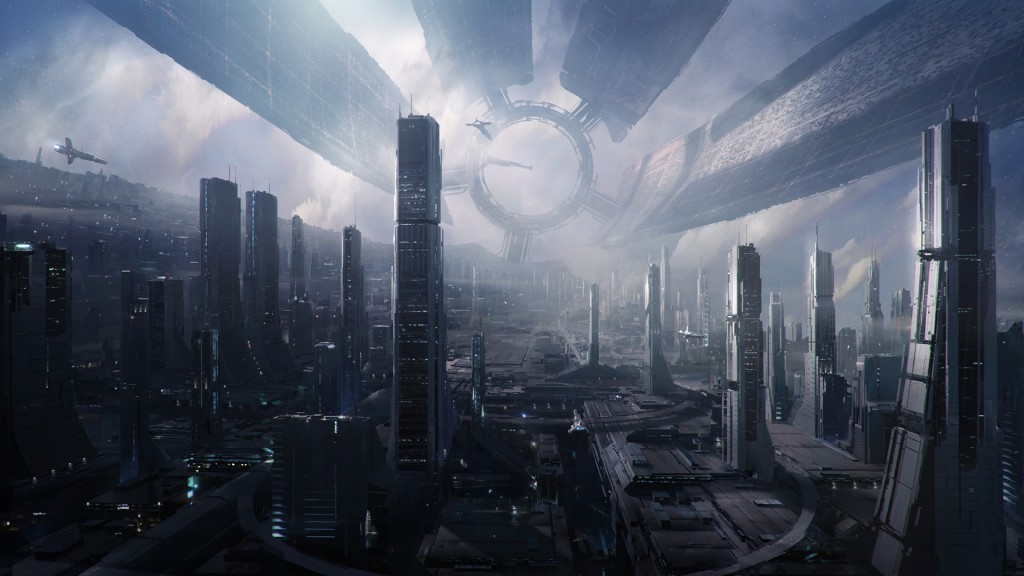 From Fan to Developer

I clambered out of my vehicle, breath hissing in my helmet, and took my first few steps on the surface of the moon. After getting my bearings, I looked up and caught a glimpse of Earth overhead, blue, green, and white suspended in an endless sea of black. The sight was beautiful, startling, and to my surprise, genuinely moving. I stared for a long time, slowly understanding that this moment—looking up at Earth—was a small realization of my lifelong interest in space; my yearning to travel to the stars.

Eventually, I signaled my squadmates, and we started up the hill toward our mission objective. It was 2007. I was in the early hours of Mass Effect, and we had a galaxy to save.

I would go on to have memorable experiences throughout the Mass Effect series—epic cinematic scenes, interactions with my team, laugh-out-loud lines—but that unscripted moment on the moon was what sealed me as a fan forever.

As someone who grew up with ’80s science fiction movies—Star Wars, Star Trek II: The Wrath of Khan, Flight of the Navigator, The Black Hole—Mass Effect was the kind of bighearted sci-fi adventure I’d always wanted, and it was one in which I was in total control of who my character was and what she believed. I’d already pounced on the prequel novel, Mass Effect: Revelation, and now I was setting foot on distant worlds, commanding a starship, and learning about alien cultures as textured as my own. But because of the way the game was built, there was room for these smaller, subtler moments too, which genuinely resonated because of what space travel means to me.

I’ve always been a writer; nothing makes me happier than the chance to create something. When I was playing Mass Effect, one thought kept cropping up in my mind: “This. I want to make something like this.” Soon after, I saw that BioWare was looking for writers. Having enjoyed BioWare games since Baldur’s Gate II, I thought, “Well, why not try?”

I was fortunate enough to make it through selection, module submission, and a tough 48-hour writing test. After my training, I was delighted to work on a childhood love, the Star Wars franchise, when I took over as the Jedi Consular writer for Star Wars: The Old Republic. As Mass Effect 2 and 3 went through development, I glimpsed the creative process from the inside: internal sizzle trailers, cool tech demonstrations, concept art. When I transferred to the Mass Effect franchise at BioWare Montreal last year, I had my chance to contribute to a universe I’d been exploring and discovering for years.

It’s been tremendous fun. One standout experience to date was working with fellow BioWare writer Ann Lemay on the “Fight for Omega” ARG on Twitter. I wrote the tweets for the Cerberus forces as they fought Nyreen Kandros and the Talon gang (whom Ann wrote) for control of Omega, complete with encrypted messages for participating fans to solve and help shape the conflict. (Incidentally, the chance to write as Cerberus’s passive-aggressive HR department filled me with glee—there’s a machinima series waiting to happen!) From there, I’ve gone on to… well, suffice it to say that I’m having the time of my life, and I’m excited about where things are going.

I’m coming at Mass Effect from an unusual perspective. I’m a huge fan who knows the series inside and out, but now I’m also a writer and designer who can look back and see how it was crafted. Mass Effect gave me complex, engaging experiences, like the romance with Kaidan that overcame changes and challenges over the years, or facing choices that would affect the fate of the entire geth collective, or understanding what drove Mordin to reshape the genophage. But those moments have also been as simple as standing on the moon, gazing up at Earth, and feeling both small and great at the same time.