Part 2 of 2 by Evil Chris Priestly

Well, another year’s Gen-Con has come and gone. I, and the rest of the BioWare staff working the Con, are very tired, but very pleased at how much fun we had and how well Dragon Age: Origins was enjoyed by the fans. We had great turn out each and every day. I don’t think there was more than a 30 second gap of empty space at any of the kiosks for either PC or Xbox 360 demos. 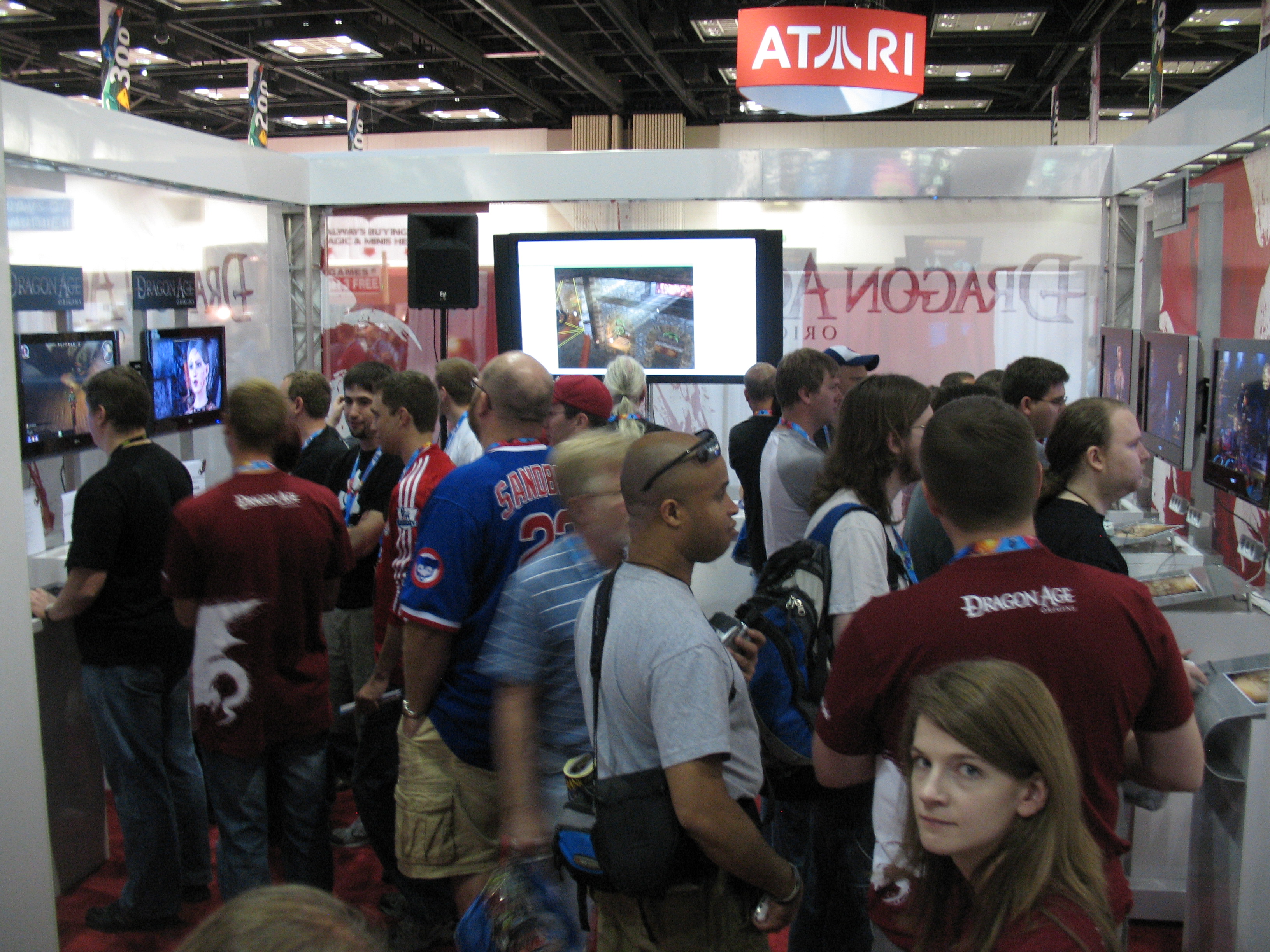 I guess I should back up a bit. If you read part 1 of my Gen Con blog (and if you haven’t go do so now, I’ll wait) you know that me, Fernando Melo (Producer), David Gaider (Lead Writer), Cori May (Technical Designer), Randall Bishop (Assistant Brand Manager), Derek Beland (Senior Programmer), Bryan Derksen (Toolset Programmer) and Vanessa Prinsen (QA Analyst) all came to this years Gen Con in Indianapolis Indiana to show off Dragon Age: Origins. We had 4 stations each for hands on demos of the PC and Xbox 360 versions. We also had a stage where we gave presentations and toolset demos to the crowd. Everyone had a great time meeting and talking DAO with fans. I think 99% of the people who came to the booth walked away impressed with the game. The 1% who walked away unhappy wanted it to be an MMO (too bad for them as they missed out a great single player RPG. We told them to check out Star Wars The Old Republic for cool upcoming MMO goodness).

The game went over great and even the people who only watched walked away talking about how cool it was or how much it reminded them on NwN or Baldur’s Gate. I had a large number of people pull out PDAs and pre-order on the spot, which was great to see. We did have a few minor tech issues, all caused by Xboxes overheating in their tiny cabinets in the hot Convention hall, but otherwise the builds performed great. Our biggest disappointment was that our swag never did arrive. We were supposed to give out 18 thousand inflatable Dragon Age swords, but the truck never showed, so our apologies to fans that didn’t get any. Our biggest surprise was likely the transformation of Vanessa from knowledgeable game assistant in to “booth babe”. Never underestimate the power of an attractive woman who is also a huge gamer and fellow nerd. 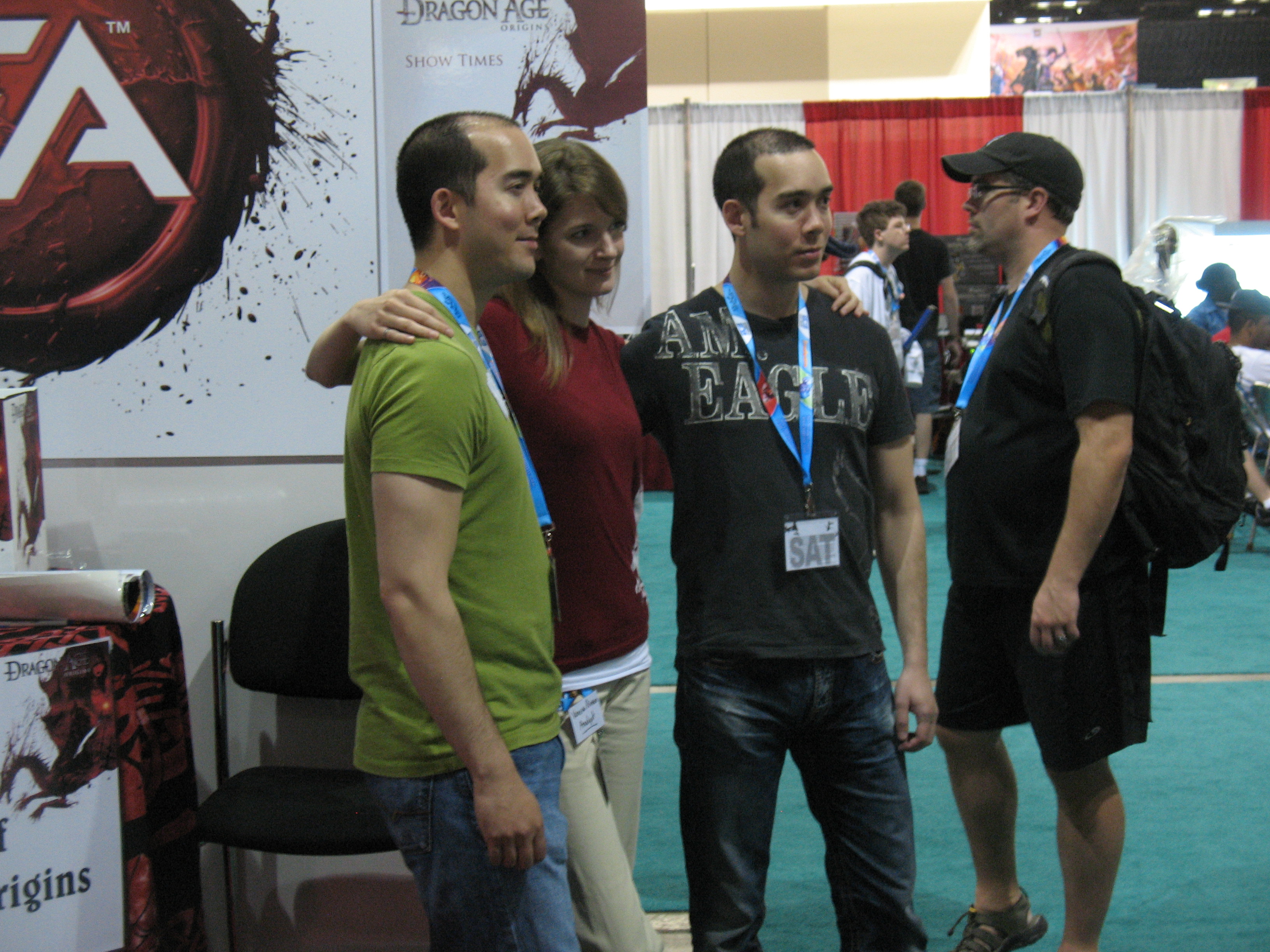 We had a great time in Indianapolis as well. Despite being really hot and humid (compared to back home) we explored, dined well and shopped when we weren’t working hard. The people of Indy are super nice when us nerds come to town for Gen Con. The only day we felt out of place was “Game Day” when the local NFL team, the Colts, played. The streets became a sea of blue and white jerseys and we felt like geeky salmon trying to swim upstream trying to walk anywhere. We also went out to a great Steak Restaurant with our friends from EA Mythic studios (who were there showing Warhammer Online ) as well as watching District 9 with them late the last evening. Great bunch of folks at Mythic and it was a pleasure to meet up with them when we could.

All too soon, it was the end of the Convention. When the announcement came at 4pm on Sunday everyone gave a strong round of applause to the Con, and breakdown on the booths began. We quickly tidied up, scrubbed our PCs and 360s clean (for security), packed up and moved out having had a great Gen Con once again this year. Will BioWare be back in 2010? Well, we will have shipped both Dragon Age: Origins and Mass effect 2 before next summer, but we do have a lot of DLC we’ll be talking about, plus we have an MMO in the works. I can’t promise anything yet, but we’ll see what we can do.

Now I’m sitting in an airport lounge on my way to Koln (or Cologne) Germany for the Koln Games Convention. BioWare is going to be showing both Dragon Age: Origins and Mass Effect 2. I’ll continue blogging once I have touched down in Germany and gotten over the jetlag. Keep track of us on Twitter at biofeed and check out our convention pictures on the Community Flickr account here: Flickr

Looks like they’re boarding my plane. Blog at you later.