Part 1 of 2, by Jay Watamaniuk

I have been making characters for a very long time, and the process hasn’t changed dramatically over the years. Gaming, both tabletop and live, is a hobby I must admit I take very seriously after more than 25 years.

Recently, a friend pitched a long term Shadowrun game he wanted to run. His game would have two important house rule changes however: it would be a steampunk Victorian England era setting, and use the Fate rules. Still Shadowrun? In essence, yes, but some major differences needed to be taken into consideration for creating a character. I drew a complete blank for the character and needed some help.

Right away I started thinking about the setting:  brick, brass, pipes, pollution, Dickensian clothing, old money, workhouses, poverty, English imperialism, emergence of modern science and on and on. I did not have a basic class concept of the type of character I wanted to play: fighter, spy/rogue, wizard/technology user, healer/support or a mixture. Sometimes I have a clear idea of what class I want to play and sometimes I don’t. Either way, I end up looking for inspiration in a variety of places. In the long, long ago era when the world was a primordial ooze before the internet I used magazines, art books, novels and movies for ideas. Today I add Google images to the mix. I work in pictures and always have. Even if I start knowing exactly what I want to play, I still go looking for pictures to get my thoughts in gear.

I used search terms from my list of setting descriptions: steampunk, clockwork, Victorian, and so on. I grabbed anything that struck my fancy in my searches, ending up with a folder of a few dozen pictures that seemed to resonate. How did I pick them? I don’t know, I just picked what I like without a definite plan. I have long since learned to trust my instincts when going through this process.

When looking at my folder I was drawn to two pictures in particular. 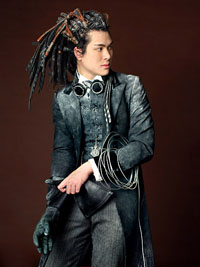 The picture at the left is taken from photographer Nadya Lev’s site. Please correct me if I am wrong but I believe the picture is of theatrical, scenic and costume designer Kit Stølen. 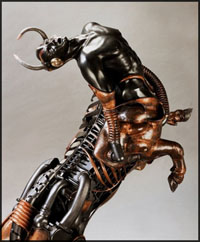 The second picture on the right is a sculpture created by French artist Pierre Matter I found on Gizmondo.

From the photo of the well-dressed man I liked the clothing, the small amount of dust, the odd bird-like dreads, and his departure from a typical Victorian Englishman. The sculpture, on the other hand, seemed like something from Dante’s Inferno with gears and brass. I looked at more art from the same artist and grabbed a few more for my collection.

Ideas began to percolate in my head now. I had the pieces and now I had to put them together.