Part 2 of 2, by Jay Watamaniuk

Looking at the picture I had saved in my Google searches, I decided the fellow wasn’t from England – where the game was set – but originally from Siam (Thailand). Perhaps he was adopted by a wealthy English family while still a boy and educated at fine schools. His clothes spoke of money but the dust seemed to give him a distracted air – like he just happened to be wearing expensive clothing but was really focused on something else far more important to him: his work, perhaps, an artist or inventor, or a bit of both. Looking at the sculpture, maybe this character was some sort of prodigy with clockworks, which is what got him noticed by the English family.

My practical gamer sense started tingling at this point, which was a reminder of the need to create a character that could survive a Shadowrun campaign, which meant having useful abilities and skills. Create the most complicated, layered, flawed character in all the known the world – but be mindful that you are there to overcome game obstacles that require skills, abilities and powers. Make a useful character or you will sit and watch the game unfold around you with little say.

So my foreign-born clockworks sculptor needed some Shadowrunish skills. I thought that the Englishman who ‘discovered’ him was actually an eccentric Royal Navy man overseeing some of Her Majesties’ investments in Northern Siam. I had not one jot of historical knowledge about this, but I liked the idea of a British military man coming across this child prodigy on his travels, official or otherwise, and adopting the boy – much to the shock of his proper upper-crust family. I now had enough background to write up a back story. One thing I was very careful to include is back story hooks that my GM could pick up and use to develop over the course of the campaign. As a longtime gamer, I have learned it is more fun when you hand your GM the opportunity to give your character trouble.

I had two things left to do with this guy: give him a name and Photoshop up a picture page to take with me to games along with my character stats sheet. I had the pictures to work with and during my initial Google searches I stumbled across the classic ‘Around the World in 80 Days‘ with the main character named Phileas Fogg. I liked the sound of that and thus Thaddius Fogg was born.

Many details to flesh him out were yet to surface (accent, personality, quirks, formative experiences etc.) but I had a solid starting point for a character that would evolve over time and over the course of his interaction with his world and the other players.

1. Find something that piques your interest about the game setting and pursue that
2. Gather ideas from your favorite sources to spin you in new directions or embellish your initial idea
3. Tie disparate elements together to create innovation in your character
4. Remember to create a character that fits how you actually play a game
5. Don’t be scared to give your GM license to mess with you for the good of the story
6. Let the game itself help to flesh your character out. Trust your gaming instincts and improvise
7. As a player, you are there to help everyone tell a great story, not just your character’s personal journey 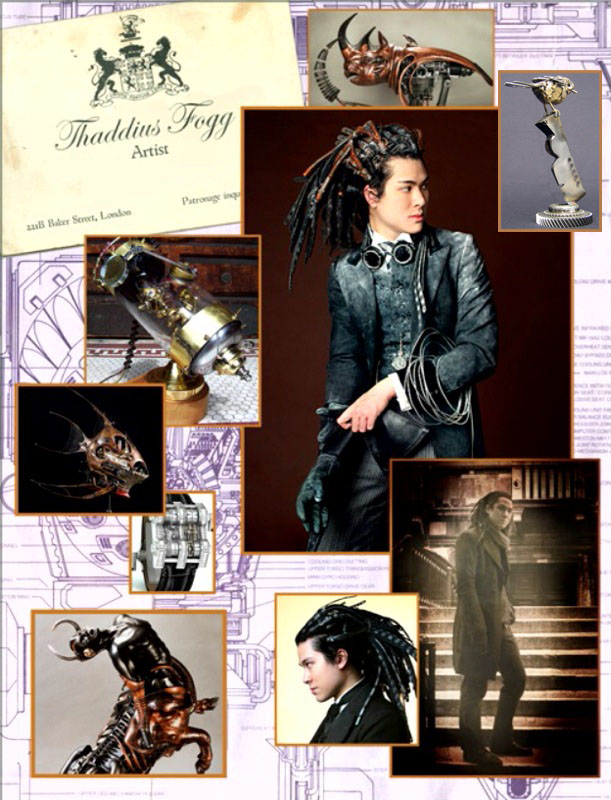