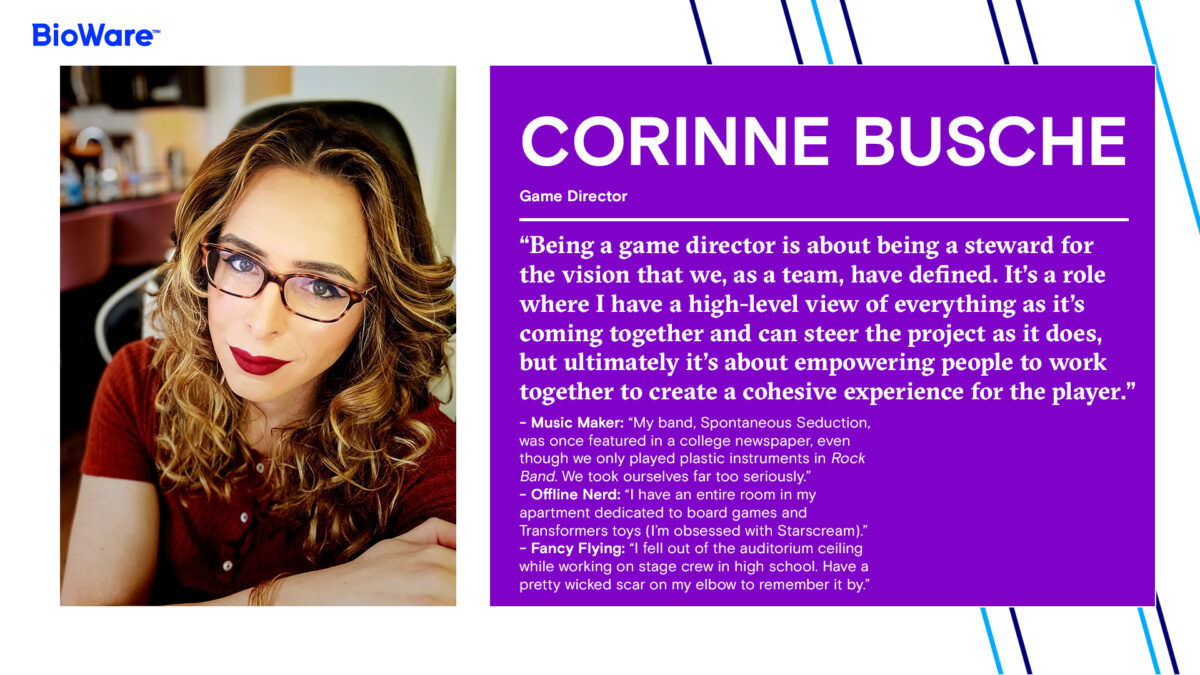 Our latest edition of Developer Stories shows how a career path can take you to different places but still lead you right where you belong. Today the spotlight is on Game Director Corinne Busche who’s helping guide the next Dragon Age™. It’s the latest stop on a more-than-15-year journey that started with… golf?

Fresh out of college with a degree in digital animation, Corinne wasn’t originally aiming for a career in games. “I expected I’d probably work in film,“ she says, “but while looking for career prospects, I was fortunate enough to land a contract gig doing environment art on the Tiger Woods franchise. I knew nothing—literally nothing—about golf, but I’ll tell you, from my first taste of being part of a game team, I knew I’d never do anything else. I absolutely fell in love with game design.”

Following her time on the links, Corinne moved over to Maxis’ The Sims™ franchise to work as a systems designer. She remained at Maxis for almost a decade, but when the opportunity to move over to BioWare arose, she jumped at the chance. “It had always been one of those dream destinations for me,” she says. “I just adore RPGs that prioritize choice and offer the kinds of relationships that tug at your heartstrings.”

Now she’s helping guide one of those RPGs herself—though she’s careful not to overstate the directorial role. “Game directors are sometimes thought of as big personalities who are singularly responsible for the purity of their creative vision,” Corinne says. “But for me, it’s really about being a steward for the vision that we, as a team, have collectively defined. I get a high-level view of everything as it’s coming together and can steer the project as it does, but ultimately it’s about empowering people to work together, play with ideas, offer critiques, and make decisions, all to help create a cohesive experience for the player.”

The Dragon Age franchise has a very special place in Corinne’s heart. In part, she says, that’s because the games are all about possibility. “In Dragon Age, you can be who you want to be, explore the possibilities and consequences of your choices, and build relationships that leave a lasting impression,” she says. “Few games give players that kind of autonomy while also weaving such a rich narrative—I think it really speaks to why our players feel so invested in this world.”

And the idea of being who you want to be carries a particularly special meaning for Corinne. “As a queer trans woman,” she says, “I have a perspective on the games that not everyone has. Dragon Age has long been a place where LGBTQIA+ folks can see people like themselves, represented respectfully. It’s inherently very queer, and it’s such a rare thing for marginalized communities to have representation where we feel proud and powerful in how we are depicted. It’s so deeply meaningful for so many. I often get emotional when I think about what it would have meant for a younger version of myself to see someone like her in a game, and as a hero, no less. I hope we can be a safe place for our queer players to know they are not alone, that they are brilliant and worthy, that they are not only welcome but celebrated.”

Corinne has found a similarly welcoming environment at BioWare itself, she says. “I transitioned during my time at BioWare,” she tells us, “and I reflect all the time on how supported and seen I felt through that process, and how lucky I am to be surrounded by people of this caliber. It really speaks to the values of this team, and their commitment to inclusion in their works and their lives.”

And she’s found that this welcoming mindset extends to the fans. “My favorite part of working at BioWare and on Dragon Age specifically is how much we get to interact with, and learn from, our players and fanbase. It always brings a smile to my face when a tweet from a fan gets posted in our Slack channels and sparks discussion. I think our fans would really be surprised if they could see how influential they are in our day-to-day discussions.”

Of course, Corinne is a fan herself, of many kinds of gaming experiences. Board games are a big draw for her, for instance. “I love board games,” she says. “I’m just fascinated by them as a game designer because they really are the craft distilled down to the fundamentals. And I love the social experience.”

Naturally, she also plays a lot of video games—“way too many,” she says. “I’m especially fond of RPGs, action RPGs, and strategy games. Most recently I’ve been playing Elden Ring, Fortnite (don’t @ me!), Slay the Spire, and of course another playthrough of Inquisition.”

And when playing a role in those role-playing games, she remains unabashedly herself. “I guess I play my characters like I behave in real life: rarely mean, sometimes snarky… and always thirsty.”

Corinne Busche is the game director for the next Dragon Age. You can find her on Twitter at @CorinneBusche or seated at a table covered with dice, cardboard, and rulebooks.