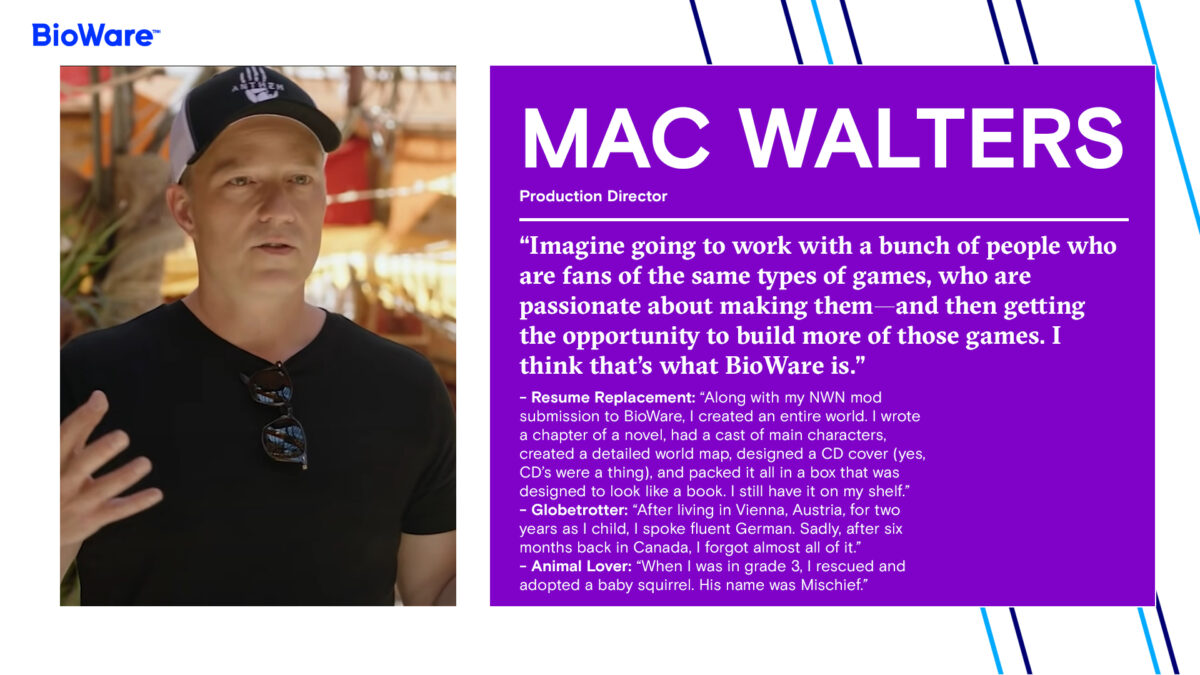 Friends, it’s time for another Developer Story, where we meet the folks who make the games that make BioWare what it is. Today we sit down with another member of the Dragon Age™ leadership team: Production Director Mac Walters. Mac has been with BioWare for… wait, 18 years? That can’t be right. Oh, here we go: 18 and a half years.

In some countries, Mac’s time at BioWare would be old enough to vote.

With such a long tenure here, it may surprise you to learn that before joining BioWare, Mac wasn’t in the video-game industry at all. In fact, he’d spent most of his life up to that point thinking that wasn’t even an option. “The first time I realized that there were teams of people who made the games I loved, I thought, ‘I want to do that one day,’” he says. “But growing up, everyone said, ‘Video games? That’s not a real job. You can’t do that.’ So I pursued a bunch of different things that weren’t my passion.”

A chance encounter changed his perspective dramatically. “I happened to meet Ray [Muzyka], one of the founders of BioWare, at a conference,” he says. “He was there talking about how BioWare was a business, how he and Greg [Zeschuk, co-founder] got their MBAs—and I know that doesn’t sound exciting, but I was like, ‘Wait a second, this is a real business? You can do this for a living?’ So I carved out part of my schedule every day to work on a submission to BioWare. That was a long time ago… but it worked out in the end.”

And as for why he looked at BioWare, specifically? “Every time I fall asleep, I’m creating a new world in my head,” Mac tells us. “I’ve been that way since I was a kid. And the worlds that BioWare was building—at that point Neverwinter Nights™ had just come out—those worlds really excited me. They released the Aurora toolset for Neverwinter Nights, which let players create their own RPG stories; I could build those worlds myself. I spent a lot of time playing with that. And there weren’t a lot of companies that were so strongly focused on telling interesting stories and having amazing characters.”

Coming off Mass Effect™ Legendary Edition as its project director, he’s taken on the role of production director for the next Dragon Age, and that role is… well, what, exactly? “The easiest way to think of it,” Mac says, “is to take the two key components of that title and map it to the film or TV industry: imagine someone who’s both producer and director. So you have the vision for a product you’re helping to uphold—something you and the team want to do—but on the producer side, you are also responsible for figuring out how you’re going to support the team in creating that vision. And then you work with the team to actually execute that vision.”

This isn’t his first leadership position at the studio, though. During his time here, Mac has held high-level roles across multiple franchises. But he never forgot his very first look at a BioWare game in development—because it was love at first sight.

“When I started at BioWare, I didn’t know what project I was going to be on immediately,” he says, “so I was kind of just wandering around, chatting with people. And I remember someone showed me a super-early concept of Dragon Age: Origins, and there were all these characters having a battle beneath the bridge, with all these arrows flying up and everything. And I was like, ‘Oh, my God, that looks incredible, I want to work on that!’”

He was fated for a different path, however: he started as a writer on Jade Empire™ before moving to the Mass Effect franchise, graduating from senior writer to narrative director and then to creative director, most recently serving as project director of Mass Effect Legendary Edition. But things have a way of coming around. “Eighteen and a half years later,” Mac says, “I finally get to work on Dragon Age, the one I saw literally on the first day I was at BioWare.”

And what is it that makes that franchise so special? “For me,” he tells us, “it’s exploring a deeply magical world, alongside incredible characters who really make that journey, that exploration, impactful and meaningful. And it’s the diversity of characters, the ability for players to really see themselves in that heroic role. Dragon Age really lets you lean into that. It allows anyone to play the role that they want to play, in a way that they can see themselves as the hero of the story, whatever that means to them. I think that’s one of the great things about BioWare games in general, and specifically the Dragon Age franchise.”

Talk to enough folks at the studio, and you’ll start to notice a common thread that runs through the developers’ feelings about BioWare, something that you’ll see in all kinds of artistic endeavors: The people who make BioWare games make them because these are the kinds of games they want more of in the world!

“I assume if you’re reading this blog, you’re probably a fan of at least one of the franchises,” Mac says. “So imagine going to work with a bunch of people like yourself who are fans of the same types of games, who are passionate about making them—and then getting the opportunity to build more of those games. I think that’s what BioWare is; we started as fans of the games that we’re building.”

And that’s kept at the core of everything the team does. “One of the questions we often ask ourselves is, would we want to play this?” he says. “Is this exciting to us? That’s what leads us to develop the games and franchises and worlds that we do. And I think that’s one of the things that makes it so much fun to work here. It is work—but it’s also getting to do something that you’re deeply passionate about.”

Even after 18 and a half years, Mac doesn’t seem at risk of losing that passion. “The franchises, the worlds themselves—they’re so big,” he says. “Like I said, I go to bed every night thinking about new stories to tell and new places to explore in those worlds. There are so many stories yet to be told.”

Mac Walters is the production director for the next Dragon Age. He can be found on Twitter at @macwalterslives or on his road bike. Or his mountain bike. Or his fat bike. He likes bikes, is what we’re saying.