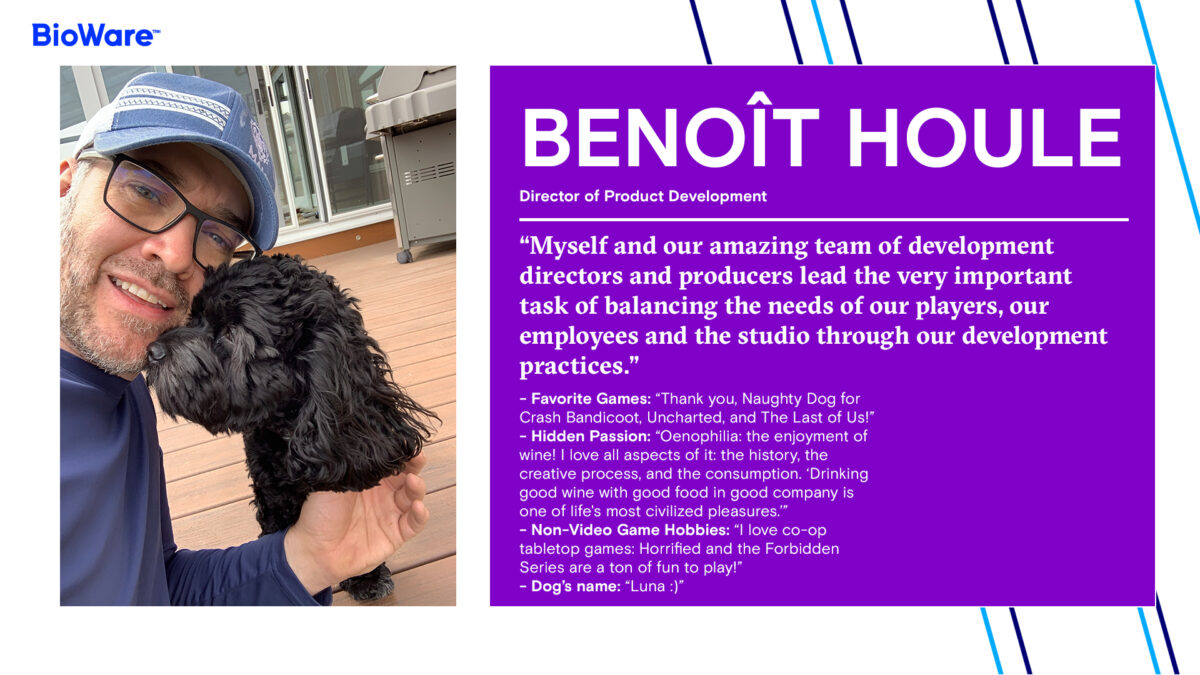 “Follow your passions!” That’s the lesson we’re getting from the subject of today’s Developer Story, Director of Product Development Benoît Houle. See, Benoît has been with BioWare for over a decade and a half, which is an impressive stretch on its own. But before joining the studio, he spent nearly as much time doing something extremely different.

“I spent 14 years developing personal-finance software,” Benoît says. “Don’t laugh, I know how to prepare my tax return incredibly well!” Yes, it turns out that a degree in computer science can lead down a number of different paths. But after all that time working as a project manager at a personal finance company you’ve definitely heard of, Benoît was looking for a change. “In 2006, a close friend of mine who worked at BioWare told me they were scaling up development,” he says. “I applied instantly. And I’ve been working here ever since—over 16 years now, mostly on the Dragon Age franchise.”

Benoît explains this role as being sort of a holistic one. “I work with our amazing team of development directors and producers to manage how we make our games,” he tells us. “The mission is to balance the needs of our players, our employees, and the studio as a whole throughout the development practices. In other words, we’re continuously working to make the process more efficient while keeping key decision-makers fully informed across the project. At the end of the day, we want to foster an environment where our teams can create wonderful games that delight our players.”

Benoît has been part of the Dragon Age franchise since the beginning, having a hand in every game and expansion in the series so far. So of course we wanted to hear his take on what makes Dragon Age so special. And here, too, Benoît takes something of a holistic view. “It’s the whole package,” he says. “A rich world, an immersive story, captivating moment-to-moment gameplay—and also emotional, memorable moments with your companions. There’s a great mixture of player agency, brilliantly sharp humor, and really weighty choices with real consequences—you know, those moments when you need to put down the controller for a bit and really think about your choices.”

When we ask about those emotional, memorable companion moments, Benoît cites Cassandra’s development in Inquisition as a prime example. “She starts off the game very guarded,” he tells us, “very focused on one thing: the mission. She comes across as standoffish, even a little hostile—it feels like she doesn’t care about you. But as you spend more time with her, you start to realize that the reason she’s so guarded is that she cares deeply about everyone around her. But caring is dangerous, and sometimes it hurts, and so she keeps you at arm’s length until you’ve spent enough time with her that she feels like she can let down her guard.”

And the fact that Cassandra is willing to let her guard down no matter what kind of character you’re playing points to one of the other things Benoît finds so special about Dragon Age. “I truly love how inclusive our games are,” he says. “This is something that’s very important to the leadership team, and I’m glad that fans appreciate that inclusiveness too.”

That ability to let yourself get lost in the game, no matter who you are, is something that gave Benoît a feeling of kinship with BioWare even while deep in the finance mines. “Even before I got into the industry, BioWare was a tremendous source of escapism and immersion for me,” he tells us. “I spent so much time playing Baldur’s Gate, Neverwinter Nights, Knights of the Old Republic…. To have an opportunity to work for a beloved game developer and be part of creating these amazing worlds and stories has been a dream come true. And I need to provide a huge shout of admiration to our Mass Effect team. They’ve been a constant source of inspiration and have created something truly amazing and remarkable!”

That dream, Benoît says, has come with more than its share of memorable moments—including how the game interacted with celebrities. “I was so thrilled when Inquisition won so many Game of the Year awards,” he says. “And I’ll never forget when we won the best RPG award for Origins at the 2009 Video Game Awards— I was so proud of the team and what we accomplished together…AND receiving the award from Snoop Dogg was definitely a bonus! And I have to say I also really enjoyed working with Thirty Seconds to Mars on the cinematic trailer for Origins.”

But it’s pretty clear that when it comes down to it, it’s not the celebrities or the accolades that drive Benoît, but something much closer to home. “You’re probably hearing this a lot, but it’s true: The thing that makes BioWare special is the people. We have an amazing pool of talent, people with the passion and the commitment to create something amazing—every day! The creativity on display here is just astounding!”