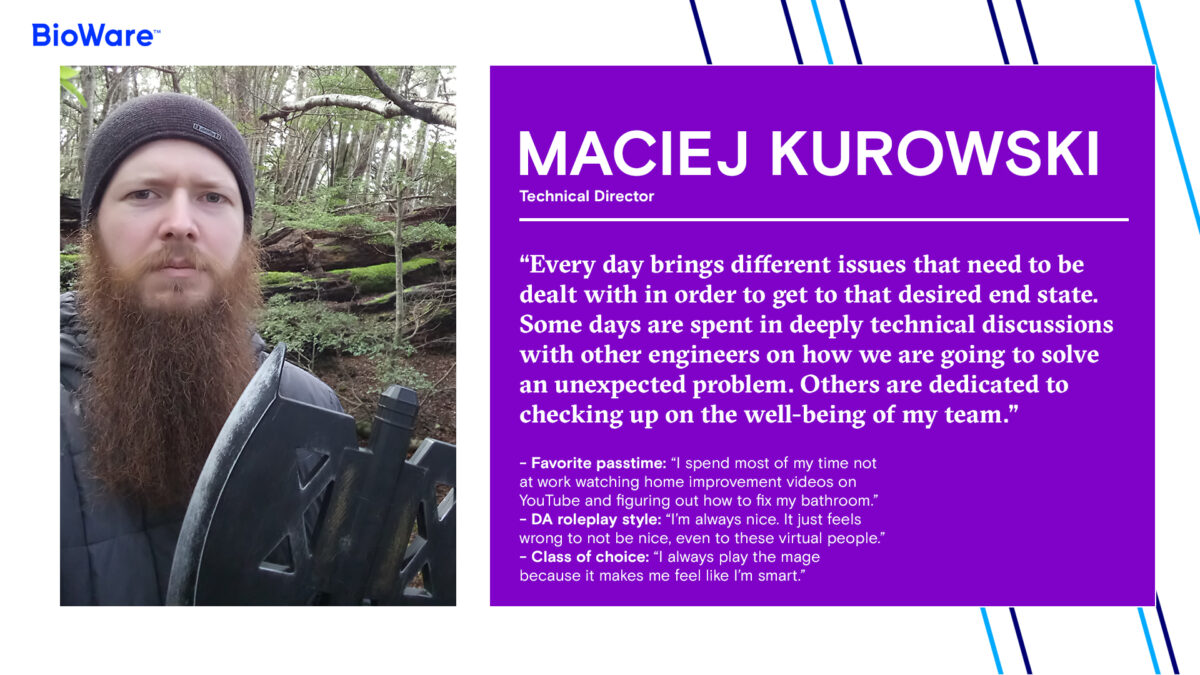 Today we’re talking with Maciej Kurowski, the technical director for the Dragon Age franchise. Maciej will have been with BioWare for six years this May and has been in the games industry as a whole for over 13 years.

After earning his master’s in computer science, Maciej joined a small independent studio in Poland, where he started as a programmer and quickly moved up to chief technology officer. It may seem like it’d be quite different from working at a big studio like BioWare, but that experience offered some invaluable insight.

“Starting on a small indie team with very few resources helped me understand something very quickly,” he says. “What ultimately matters is to get a good game out. Any tech, no matter how impressive, is just a means to an end.” And that’s an important lesson when things scale up. “On a big, highly specialized team, it’s sometimes easy to get lost in technical minutiae,” he tells us. “So I’m grateful for the experience of being forced to focus on the end product.”

That focus continues to inform his work as technical director, where he oversees not only the technology that drives our games but also the tools our developers use to make them. So the proper focus can make a huge difference. “Ultimately, my goal is to launch a high-quality game smoothly,” Maciej says, “while staying within the timeframe and scope we’ve set for the game. But making a game takes years, and every day brings different issues that need to be dealt with in order to get to that goal.”

We asked Maciej what an average day looks like on the path to that destination—and it sounds like there may not be such a thing as an “average” day. “Some days are spent in deeply technical discussions about how to solve unexpected challenges,” he says. “Others are dedicated to checking up on the well-being of my team. But probably my favorite days are the ones where I get to help devs in other departments figure out their challenges. I love that we can all work together to make the best experience for players.”

It’s hard to express how gratifying it is to have players who experience these games and feel so passionately about them. So we like to ask our interviewees why they think fans respond so strongly. In the case of Dragon Age, “I think it’s that these aren’t your usual fantasy stories,” Maciej says. “Fantasy has historically been aimed at teenage males, and that used to be the demographic games were geared toward, too. But that’s no longer the primary demographic of gamers—and it was never the whole demographic anyway. So I think, especially with DAII and Inquisition, that Dragon Age speaks to a wider variety of people, with stories that aren’t just about being cool, doing fancy things with a sword, killing things, and seeing lots of blood.”

And the “stories” part of that is especially key. “Another thing is that these games are a mix of pure roleplaying—being able to build your own character and have them act in a variety of different ways—and a strong story. There are a bunch of other really successful RPGs that have more of a simulation approach, where it’s all about freedom. But that can come at the cost of a complex story, and the connection a player makes to that story. I think since BioWare games tend to prioritize storytelling more, while still offering genuine roleplaying, players can really get invested. I think there are few games that can balance those two things as well as Dragon Age does.”

That balance grabs even folks like Maciej who develop the tech for games. It’s what keeps him so invested that he won’t even consider playing an evil—or even rude—character. “I appreciate the existence of the ‘jerk’ options,” he says, “but it just feels wrong to not be nice. I’m probably nicer to virtual people than to actual people.” It’s what allows him to name his favorite moment in any Dragon Age with almost no pause for thought (“Wicked Eyes and Wicked Hearts” in Inquisition, the one in Orlais with all the court intrigue). And it’s what gives him an easy answer for what Dragon Age character he’d most like to work alongside: “Varric, so he can narrate our efforts making the game while flashing his magnificent chest.”

You’ll notice as we do more of these Dev Stories that lots of folks talk about “BioWare games” as almost a genre in themselves. And we’re always curious what it is that our colleagues think makes BioWare special. Perhaps unsurprisingly, Maciej has a technology-focused answer. “One thing that I was pleasantly surprised with when I started here was how closely we’re able to collaborate with other EA studios on our tech,” he says. ”We don’t just share centrally developed tech; there’s also a lot of code-sharing between the studios. It may be surprising to players, but there are lots of common technical challenges that we share with games as different from ours as FIFA, and being able to contribute solutions that end up being used across many different games is a great perk.”

And that’s not even mentioning the collaboration that has to happen between BioWare’s own two studios, situated over 2.000 miles apart (around 3,400 kilometers). Throw a global pandemic into the mix, and you’ve got the potential for a technological nightmare. But the team took things in stride. “Ever since I joined, we were working in a distributed manner between our Edmonton and Austin studios,” Maciej says. “But the pandemic forced us to rapidly deal with all-new challenges that come from an extremely distributed team. It was chaotic at first, for sure, but I think we ended up even stronger than before.”

We’re just glad our newfound ability to work remotely hasn’t driven Maciej back to his more temperate homeland. “I’m told Edmonton is a prime example of North American urban sprawl, and that that’s a bad thing—but I actually enjoy all the space,” he says. “The weather, though… when the air hits your face in the winter? That hurts.”

Maciej Kurowski is the technical director for the Dragon Age franchise. When not at work, he can be found scrutinizing home-improvement videos on YouTube for tips on how to fix his bathroom.