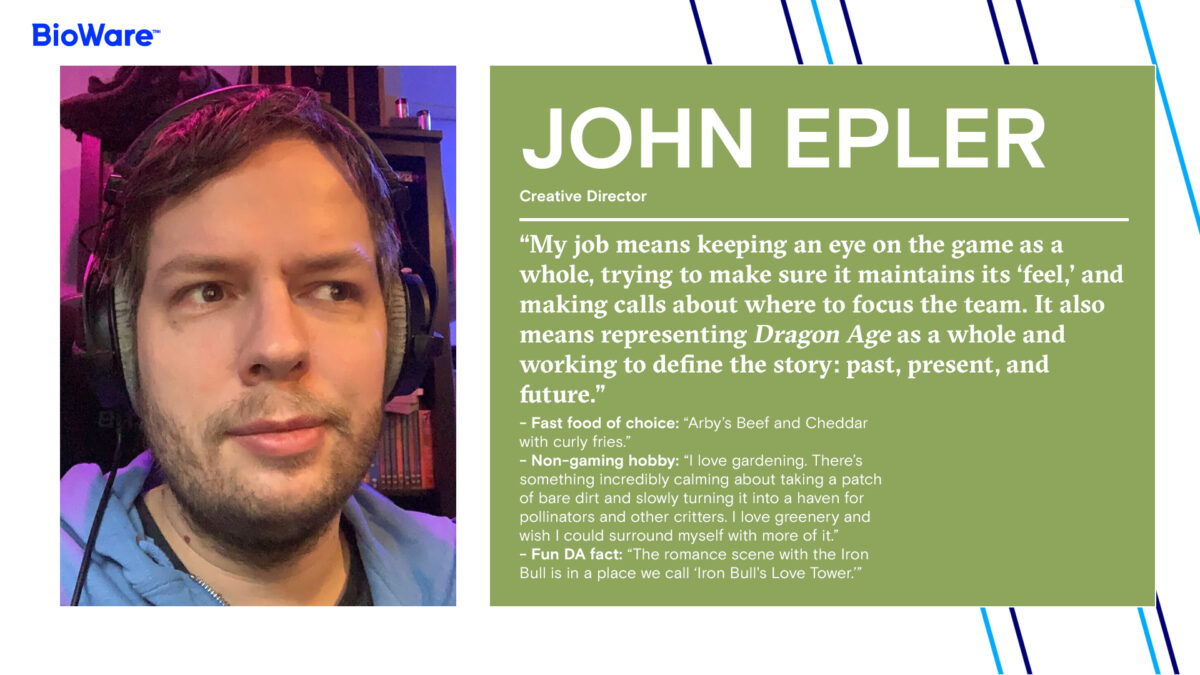 Friends! Welcome to the first of many BioWare Developer Stories! In this series, we’ll be talking with our colleagues here at the studio about their histories, what they do at BioWare, what makes this such a special place to work, and all sorts of other topics.

Today’s lucky contestant is John Epler, Creative Director for the Dragon Age franchise. John’s been at BioWare since the late ‘00s, but he actually didn’t get his start on the creative side of things at all. In fact, before BioWare he was in a different field entirely: the audiovisual trade.

“I was selling TVs,” John says. “I knew I wanted to get into games, though, and at the time BioWare was hiring term testers, which is a contract position in QA.” (That’s Quality Assurance, the folks who track down bugs and other issues.) “I got lucky enough to run into a couple of BioWare people at the store and mentioned that I’d applied. I got an interview, got the job, and I’ve been working at BioWare ever since.”

After a few years in QA, John started working as a cinematic designer on Dragon Age: Origins, which he describes as working with a huge library of animations to put together cinematic scenes. “It’s largely about knowing the animation library well enough to be able to go, ‘Oh, I need someone to walk backwards for three seconds; here’s the animation that does that,’” he says. “So you round up all the appropriate animations and stitch them into a finished scene.”

John remained a cinematic designer through Dragon Age: Inquisition, graduating to lead cinematic designer for Inquisition’s DLC. From there he moved into the narrative director role for the next game, which is more about the story and characters of a game as a whole. “You’re focused on narrative as more of a holistic experience,” as he puts it. And now, as creative director, he takes an even wider view, “keeping an eye on the game, and the franchise, as a whole,” he says, “and making calls about where to focus resources on the project.”

With all this Dragon Age experience, you might expect John feels a strong connection to the series—and you would be correct: When we ask about some memorable moments from his time with BioWare, he goes right to the closing days of Inquisition’s development. “We were finishing out the Redcliffe scenes,” he says, “and one of our audio guys called me down to listen to what he’d been working on. I remember standing there, hearing the theme kick in, and thinking, ‘Oh, wow. We might have something special on our hands here.’ We’d put so much of ourselves into this thing, and it was finally coming together.”

It’s a scene where the player has to decide what their character believes in. And that kind of moment is one of the hallmarks of the series, John says. “Faith is a big theme throughout the games,” he explains. “Not faith in a religious sense, necessarily, but belief in something—whether that something is a wholly unknowable figure, or another person, or even just yourself. And the games look at what happens when that belief is challenged, or completely broken.”

John’s connection to the franchise extends even outside of the games themselves: He contributed to the 2020 short story anthology Dragon Age: Tevinter Nights. So naturally, we had to ask how writing a short story compares to writing on games. “Honestly, both have their own challenges,” he says. “Writing games has to consider interactivity, budget, branching, technical needs…so the actual writing is only a small part of the job. Fiction is easier in that I can write whatever I want because there’s never going to be someone building any of it. But I think you lose a lot of shortcuts that you get in games. Like, I hate writing fight scenes—but in a game, I can say ‘and there should be a fight here’ and I never, ever have to write another fight scene.”

There’s a reason Dragon Age makes such an impression even on the people who help make it. “Dragon Age is really about the people,” John says. “The stuff with BioWare games that tends to get referenced the most—the things you hear people bring up time and time again—it’s almost never the big critical-path beats. It’s the character beats, and at their best, those critical-path beats and those character beats become the same thing. It’s about how those characters interact with each other; ‘family is where you find it’ is a pretty core theme for all of our games.”

And John’s introduction to the studio’s own cast of characters was an especially memorable one. “My very first day at BioWare was the day they held the Mass Effect launch party,” he says. “It was at our local science center, and they had the game playable on the planetarium screen! We had the run of the place after hours—it was pretty incredible.” He pauses. “It may have set the bar way too high.”

And what would John be doing if he hadn’t found his way to the studio? “Honestly, I don’t know,” he says. “I nearly ended up working at a paper supply company before I got the job at BioWare, so maybe that? There’s an alternate universe John out there somewhere that’s basically—I want to say Jim from The Office, but I’ll be honest and say Andy—and he’s living that life, and probably making games in his spare time. But it’s hard to imagine, honestly. I’ve been working here for nearly a third of the time I’ve been alive!”

John Epler is the creative director for the Dragon Age franchise. You can find him on Twitter at @eplerjc.