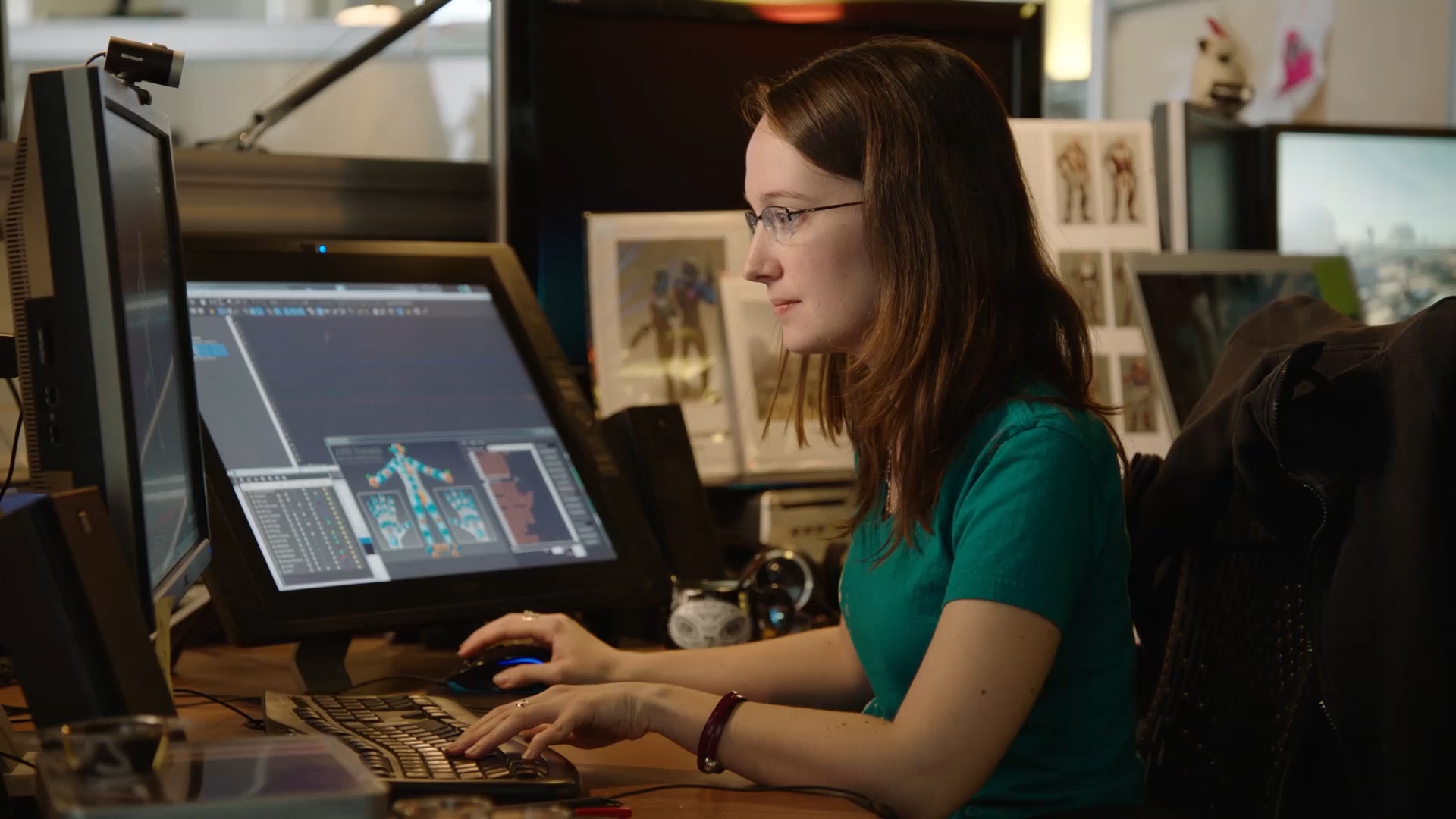 Here at BioWare, we’re proud of the team we’ve built. So, we thought International Women’s Day was a great opportunity to talk with some of the talented women at BioWare about games and their contributions to the industry. We spoke with Director of Product Development Janice Thoms, Animator Claire Gary, Writer Jo Berry, and Lead Editor Karin Weekes to explore the lives of the women behind the curtain.

What do you do at BioWare?

Janice: Still trying to figure that out. [laughs] In a nutshell, I look at how we make our games and see if there’s a better way. Across the board, I do everything from management to optimization.

Karin: There’s no short answer. There are two major facets—there’s the editing to make words pretty, including dialogue, marketing materials, voice-over, and internal work. The other side is production, as we interface between writers and localization teams.

Jo: I’m a writer. If it’s got words, we’ve probably touched it. But me specifically? I’m the lore nerd.

Name one unexpected thing that helped you land your job at BioWare.

Janice: I took a shot, and they were thankfully willing to take a chance on me.  I didn’t think I was qualified at all. I hadn’t written code in three to four years. But I took a shot. I think a lot of us suffer from being self-conscious, or not having as much confidence as we should, so be confident.

Karin: The interview question I never expected to get was, “If you had 24 hours on a holodeck, what would you do?” I stopped, paused and then responded with, “I don’t think I can actually tell you what I would do in a job interview.” The reply was, “That’s the right answer.”

What’s the most surprising thing you’ve learned working at BioWare?

Karin: The passion. I continue to be in awe of how many people from all over the world play our games. It’s been eye-opening and mind-blowing to see the people, their age ranges, and the lengths they go to even acquire our games in certain countries. I see how connected they are to the games, and how it’s a focus for communities. It’s very cool.

Jo: It’s been interesting to learn people’s jobs. There’s so much to know. It’s interesting to work with people at the top of their game and even getting a little glimpse of what they do is just… it really opens your eyes to how much is going on in games.

What has been your proudest professional moment?

Karin: That’s hard. This is going to sound dorky, but it takes so many of us to make a game, I rarely feel like anything I personally do makes a huge difference. Editing is weird, because if we’ve done our job right, you don’t see us. Sometimes, I lend a female perspective that helps shape a portrayal and that can make a character more appealing. That’s interesting and rewarding.

Jo: Hearing about people who have been inspired or helped by our games. There’s been so many cases of that, with people saying, “Playing as this character helped me realize more about myself or my sexuality or about who I am.” A lot of people say our games helped them get through something really difficult and that’s humbling.

What is your favorite thing that you’ve worked on?

Claire: I worked on a ‘Big Robot Thing’ in Mass Effect: Andromeda. I helped design it from the beginning. It was the first giant creature I’ve ever worked on and was a monumental task. There’s some crazy animation, with lots of twisting and stuff. It was really fun to animate.

Karin: One of the most entertaining things from project-to-project is the sex and swearing guidelines, which I help update regularly. There’s a per-game style part of it, like avoiding modern sayings and out-of-context religious terms in Dragon Age games;  then there’s a technical side, for which I get to actually count the numbers and types of swears in our games. Articulating the specific ways in which one can and cannot use the word “ass” is one of many tasks where I say to myself “I can’t believe I’m getting paid to do this.”

Jo: The Tempest in Mass Effect: Andromeda. It really feels like a place where people live and work. It feels like a home. Also, Samson and Calpernia in the Dragon Age games. I didn’t expect them to resonate with people as much as they did. I really like how they came out. Even if you don’t like them—and you’re not supposed to—there’s something about them that reaches out to you.

Name one thing you use daily.

Janice: Well… I have multiple containers of hand lotion. Edmonton is so dry I’m always slathering that on. [Chuckles]

Jo: A keyboard. Either to write or for banging my head on it.

Karin: My headphones. To block out noise, communicate across studios, or play games.

Claire: My graphics tablet. I draw whenever I can because it helps me to get my ideas out.

If you could give one piece of advice to women looking to enter the industry, what would it be?

Claire: Start on your project instead of learning. You learn more by doing. And do something you like. If you don’t like making it, people won’t like playing it.

Jo: Make a game. A simple game. Just do it. Start by making mods. Get a toolset. Doing it will teach you how it’s done. One finished game in a portfolio is worth 20 ideas. And be prepared to work hard. Talent is only part of the equation.

Janice: Keep learning. That might mean staying in school, reading a lot, or picking up a free game engine. Start making games, or even looking at the games you’re playing with a critical eye. Keep developing that portfolio. As someone who used to do hiring, you’re looking for someone that has that hunger to learn and improve.

If you could go back in time before you got into games and tell yourself one thing, what would that be?

Karin: You don’t have to wear gaming t-shirts and jeans for the first three years of your career. You don’t need to force yourself to fit in. It’s okay to keep on being you.

Janice: You can do it. I think a lot of women suffer from being self-conscious, or not having as much confidence as we should. Tell your younger self, “You can do this. I know you never thought you could be a game developer, but you can do this.”

If you’d like to follow any of these talented women, they can be found on Twitter Karin Weekes @KarinWeekes, Jo Berry @Joanna_Berry, and Claire Gary @ClaireGary64. Additionally, Jo  and Claire will be joining us at the BioWare Base for PAX East, so please drop by and say hello. Happy International Women’s Day.