We received an incredible response to our multiplayer level survey and would like to thank all 26,000 participants.  The data you provided has been illuminating, and we’ve summarized the results below. 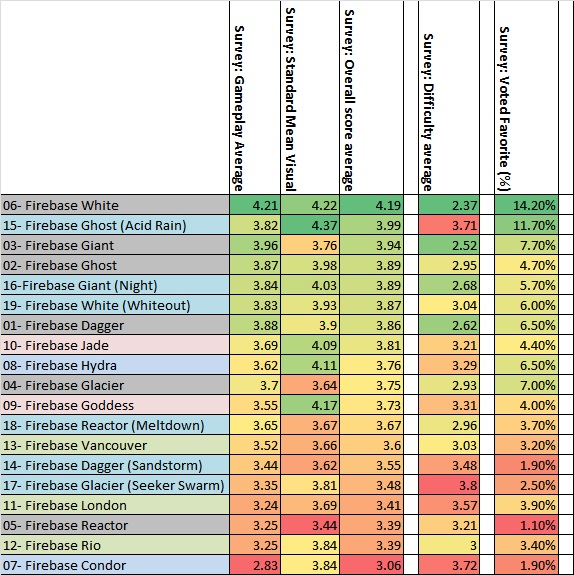 Looking at the data, we see interesting connections. In general, the gameplay and overall scores are closely tied to the difficulty score. The easier the level, the more people enjoy it. Our telemetry supports this, showing that easier levels were played the most.

Firebase Glacier is a prime example. This popular level received average gameplay and overall scores, and it was also one of the easiest levels to complete. In was the fourth favorite map out of 19.

We received a lot of great feedback on each level through this survey.  The next section summarizes the most common feedback for each level.

Condor splits our fans into two groups. Some people loved the map, especially for its great atmosphere, and others didn’t enjoy the map at all. The feedback mentions issues with the slow ammo timer and with cover. The design of the map is open and allows for many lines of fire against the player, making the map difficult.

There are a lot of Dagger fans out there! Many of you liked the long ranges that made this a great sniping map, and it still had enough close ranged combat options to support every play style.

The map was a bit too open for some people, resulting in too much fire from too many directions. This issue was exacerbated in the Hazard (Sandstorm) version of the level. The sandstorm was a great visual event that hindered the player’s ability to see, but unfortunately it did not hinder the vision of the enemies. This was brought up as a big concern.

Firebase Ghost was our second-most popular map due to its balanced gameplay for short- and long-range experts. People mostly enjoyed the cover layout in the level and the visuals of the Hazard version (Acid Rain).

This level’s biggest drawback was its extraction point being lower than the surrounding area and being light on cover. Players enjoyed the level overall, but the extraction point was a concern.

Most comments on this level were positive. Overall, a lot of people thought this was a good, if not a great map. Giant was also considered easy—even too easy for some players. Its mix of open and closed areas with chokepoints and sniping opportunities were key positives.

There are mixed opinions on the extraction point. Some people found it easy, others hard. The key was controlling the chokepoints, but the player had no way out if they failed to do so.

Comments on Giant’s Hazard version (Night) focused on the improved visuals and atmosphere, but the consensus was that gameplay was less fun.

The most common comment on Glacier was that the map was too small. This tiny level is favored by close combat fans for its franticly fast pace. It’s quite easy to play so long as you maintain control of the area.

The Hazard version (Seeker Swarm) puts greater pressure on team coordination and map control. The seeker swarms made the map harder, and many players enjoyed the challenge. Others preferred the map without the addition.

And yes, Mordin did find a way to combat seeker swarms in ME2. Unfortunately, Mordin was not around to adapt his solution to the modification Cerberus made to this map’s swarms… 😉

Goddess was seen as a pretty level with solid gameplay that kept you on your toes. The visuals were praised as one of the best of all the MP maps, and the gameplay was especially good for well-organized teams that liked to run and gun. The objectives were deemed difficult, though, as it was too easy to get surrounded.

Hydra’s visuals received a lot of praise. (This made the artist very happy!)  Many players—especially snipers—liked the open style of the main area. Players noticed that difficulty was dependent on the enemy palette chosen. We received a lot of feedback on the extraction, with some wishing there were different locations and others wishing there was more cover or line-of-sight blockers in the current location.

Jade had something for every play style. Other than the extraction zone, where the cover was too light, the gameplay was received well. Other comments mention the importance of staying coordinated as a team to prevent getting surrounded. Jade’s visuals were praised as was the overall experience. It was considered a fun map.

The main comments on London were on cover and the open nature of the map. Players found a lack of cover in certain areas that made enemies difficult to deal with. This difficulty level generated a lot of comments, and the hack location in the middle of the map was particularly hard. Still, feedback was largely positive, with ammo distribution and the map’s visuals getting positive reviews.

Reactor generated a lot of discussion about the map’s enemies. The bug in which enemies got stuck was a sore point as was the layout and lighting, which made it hard to find enemies or anticipate their movement. Still, there were a lot of positive comments about good sniping opportunities and the balance of the map vs. each character class.

The Hazard version (Meltdown) was definitely more popular than the base version with players enjoying the interactive part of the map. Overall, players were split 50/50 on whether they had fun with their teammates or were simply scared of getting trapped inside by them. An earlier warning would have been desirable.

We received a lot of good feedback on Rio that we will account for in the future. This map was initially loved by players, but over time it became less popular. The “box of shame” bug was frequently called out as a negative. The layout was also somewhat controversial in that it encouraged specific play styles in different areas. This was seen as a negative when compared to maps that allowed a mix of play styles. Players enjoyed this map’s long ranges and that it emphasized teamwork. They found that working well together decreased the map’s difficulty, but they also found that small errors could quickly turn a sure victory into defeat.

This map is praised for how it plays with verticality more than any other level. While there was a good deal of positive feedback for this level, it was seen as a tad dull in some areas. Overall, though, it gave players a great experience and had a great skybox. The biggest issue mentioned was that the ladder in the middle of the map should not have been so heavily relied upon as a main thoroughfare.

This map received the most positive feedback. Players overwhelming felt that the layout corrections were for the best. There were good discussions about how the map discouraged players from camping and from employing a single strategy for all the games in the level. The majority of players (past and present) enjoyed White for its gameplay and excellent visuals.

Comments on the Hazard version (Whiteout) focused on the unmanageable visibility that was caused by the overlaying effects of certain powers like Krogan Rage and Adrenaline Burst in combination with the snowstorm. The atmosphere created by the snowstorm was appreciated, but the problems held the map back in its fun rating.

As you can see, we got a lot out of this survey. It was a huge success and we want to end with thanking everyone for participating. This report is just the tip of the iceberg! We learned way more than what we specifically mentioned here. Your comments were informative and fun to read—we even got a haiku or two! This survey shows us just how much you care, and we will make sure to use all this valuable feedback in the future.