Today I am really pleased to get to show off a preview of a new comic book by IDW Publishing and BioWare/EA Comics – Dragon Age. Issue #1 of Dragon Age is now available through iTunes HERE and is available on PSP HERE

As those of you who read this blog know, I am a huge comic book nerd. Basement full of back issues? I got them. Shelves full of statues and toys? Bookcases full. Superhero themed underwear badly in need of a wash? No comment, but I think you get the idea. I am a big fan of comic books and as you can guess from my job, I’m also a big fan of Dragon Age and BioWare’s games. 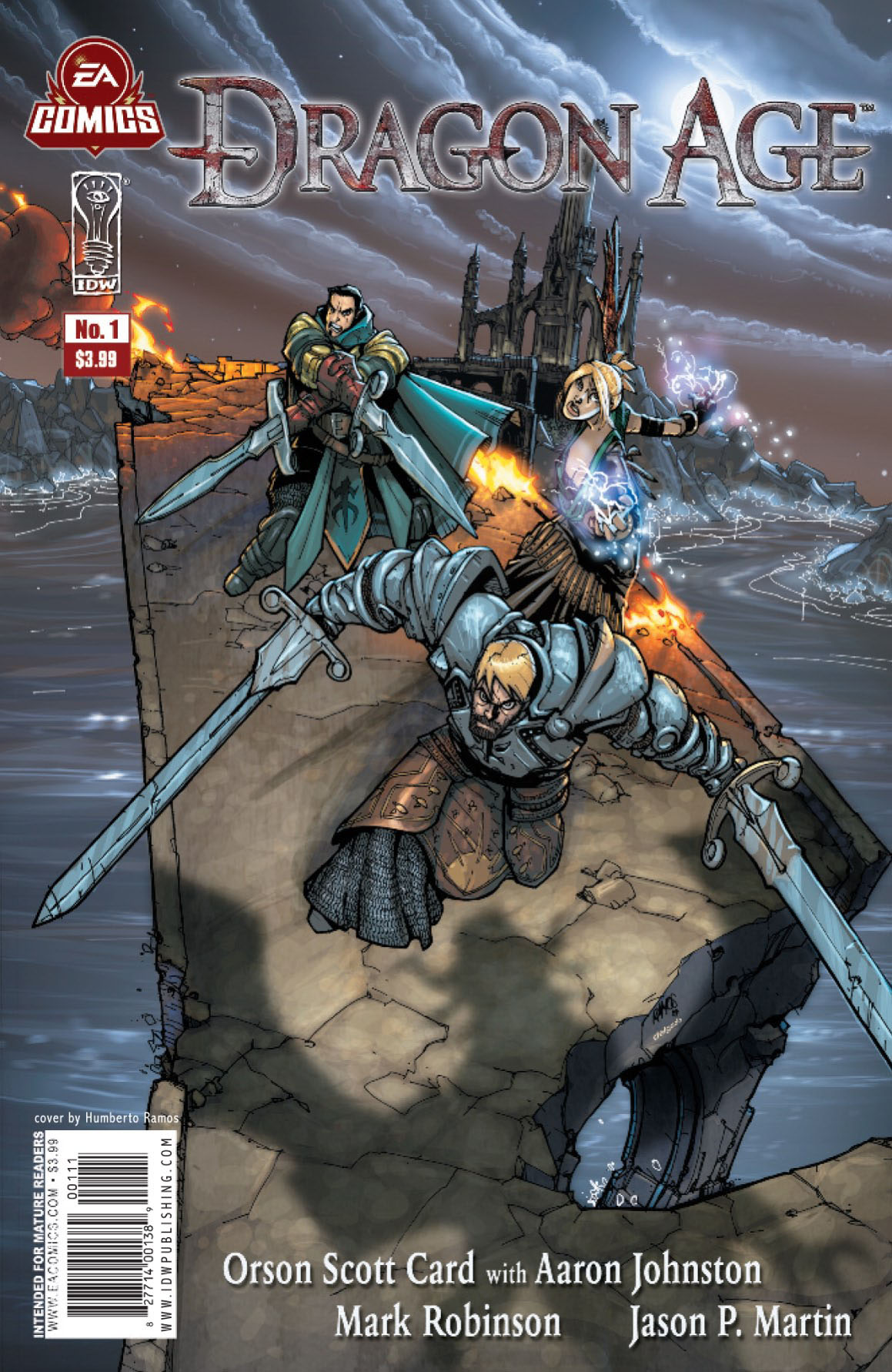 For those of you not yet big fans of IDW like I am, let me tell you a bit about them. IDW Publishing is well known in the comic world for working on some of the biggest titles and licenses around. Are you a fan of Transformers? How about Doctor Who? Star Trek, G.I.Joe, A-Team and many more famous TV and movie properties. They also have many of their own great titles like 30 Days of Night, Locke & Key, Wormwood (a personal favorite) and many more. You can read more about IDW Publishing and their comics or pay a visit to their store HERE.

Dragon Age (the comic) is build directly from the story and lore created by BioWare, but is created by an amazing team of artists and writers from IDW. The comic is written by acclaimed author Orson Scott Card (author of the Ender Saga amongst much more) and Aaron Johnson with interior art by Mark Robinson and cover art by renowned artist Humberto Ramos. The comic will take video game fans into a whole new adventure in the Dragon Age world. In a time lost to history, a war ravaged the land. Mages, incredibly powerful wielders of magic, ruled the world through mastery of dark arts and forbidden spells. Their lust for power almost destroyed all existence, and unleashed an unholy pestilence, the Darkspawn, to plague mankind, trolls, faeries, and all the inhabitants of the realm. Now magic is carefully controlled, taught behind the sacred walls of the Circle of Magi, and monitored by the ever-vigilant Templars. It is in this arena that a new generation of Mages in training will arise, warriors of sorcery who will defy the rules of the Templars and change the course of the world forever. To learn more about the comic, you can visit the Dragon Age comic page on IDW Publishing HERE. 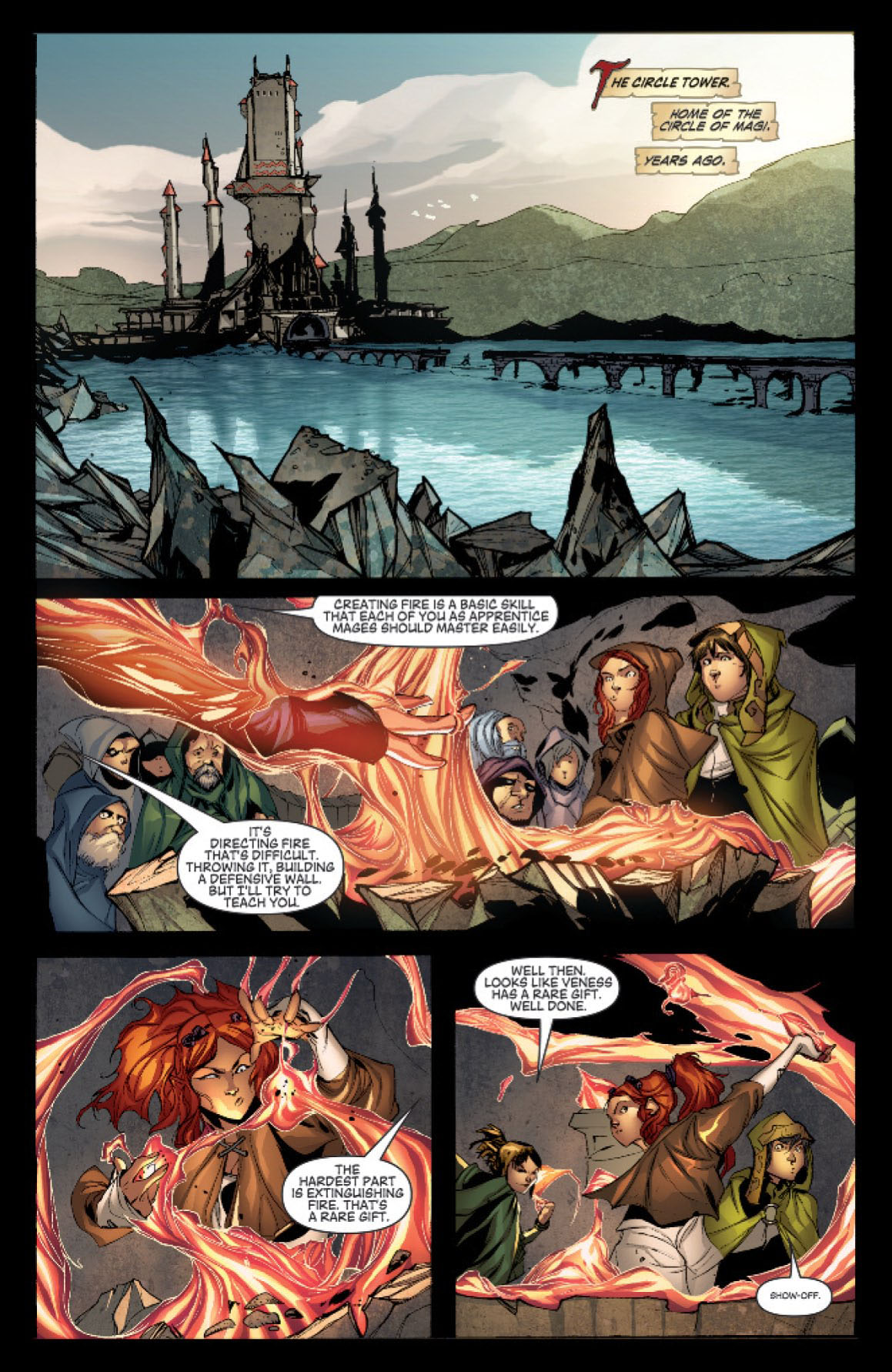 IDW have been great to work with and want all of our BioWare fans to get a sneak peek at the cover (as you can see above along with page #1) and the first 6 pages of Issue Number 1. You can download a PDF file of the cover and first 6 pages HERE. If, like me, you love the art and the Dragon Age world, you need to get your hands on Issue #1 which is on store March 31. If you are not near a comic shop but, like all good Dragon Age fans, you still want to read the comic, the fine folks at IDW have made Dragon Age (and many others from their repertoire) available for download on iTunes. Check with your local comic shop for details or check out the IDW Publishing store and iTunes to make you sure don’t miss out on Dragon Age.