by Evil Chris Priestly. A collaboration with Ideas by David Gaider and Art by Aimo.

We are very pleased to bring you an awesome new Dragon Age: Origins comic strip jointly created by one of the members of our Community, Irma Ahmed who is better known by her artist name Aimo with assistance from Dragon Age: Origins Lead Writer David Gaider. If you have not yet had a chance to see Aimo’s art, you should check out her personal art website here: Aimo Studio Fortunately for us, not only is Aimo/Irma a very talented artist, she is also a huge Dragon Age fan. She and David were talking one day and… actually, I think it would be better if Mr Gaider explained in his own words.

David Gaider – “I’ve always been a big fan of Aimo’s art – she has an incredible ability to capture the emotions of her characters. So I started chatting with her a bit back in January, and the idea came up for us to maybe collaborate on something. I mentioned a cutscene we had considered doing prior to Morrigan’s offer in the climax (*spoiler alert* for anyone who hasn’t played that far in Origins) but which had been left on the cutting room floor along with so many other scenes. This one in particular was hard to cut, because it was supposed to give some context to the player who romances Morrigan or who had become really good friends with her that what she was about to do was causing her conflict. As is pretty typical for game development, however, you have to work with the resources at hand… but this comic will maybe allow some people a brief glimpse into the “might have been” that was. Naturally Aimo’s efforts here were ten times mine… all I had to do was write up the scene from memory and then she proceeded to sketch it out over the next few weeks. Pretty awesome, if you ask me. Hope you all enjoy it!”

Check out Page 1 below and then click the links to see the full 8 pages. 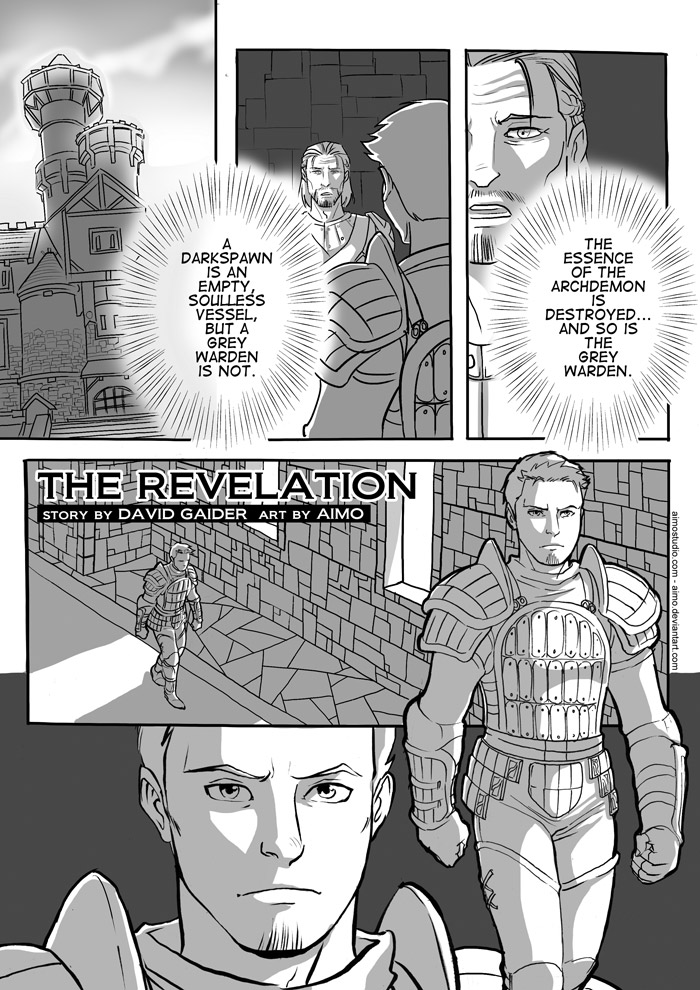 Aimo, real name Irma Ahmed, has been playing Bioware games since the days of Baldur’s Gate II. Dragon Age:Origins is her current gaming ambrosia, which has inspired many fan creations on her part such as artworks, comics, and even storyboard animatics of party banter. She credits the game for unearthing an affection for the Dwarves, as evidenced by pro-dwarf themes in her tributes.

When she’s not juggling game time between a Dwarf Princess, an Underdog Elf, and a Noble Whelp, she is a professional sketch card artist. Her work credits include traditional medium art for card companies as Topps, Upper Deck, and Rittenhouse Archives on properties of Lucasfilm, New Line Cinema, and Marvel. She intends to sit down and start working on that one great comic opus in the near future.