I recently stole a moment with the Lead Writer of Dragon Age: Origins Awakening, Ferret Baudoin, to ask him a few questions about the recently revealed Sigrun character. If you haven’t yet learned abotu Sigrun, you can check her out here: SIGRUN

Hey, Ferret — can you tell us a bit more about the background of the new character Sigrun?
Dust Town. The mean streets of Orzammar. That’s where Sigrun hails from. As was seen in Origins, Dust Town is an oppressive place where people do whatever they can to survive. Sigrun was no exception. She was an accomplished thief and unwitting killer who was eventually caught. She was given a choice: immediate execution or join the Legion of the Dead. She chose the Legion.

So Sigrun went to her own sparsely attended funeral and joined her new brothers and sisters in the Legion. Everyone in the Legion is considered dead already. And for many, the formality becomes actuality in rapid order. The Legion goes far into the Deep Roads, in places no sane dwarf would dare to venture, killing darkspawn by the score. Sigrun found redemption in the order, camaraderie, and time to be retrospective about her misspent life.

So she travels with her unit, knowing that one day death will claim them all. But deep inside, she struggles against the hard won street wisdom of Dust Town: “survive at any cost.” And that makes it hard for her to stoically embrace the honorable death that must great all members of the Legion.

What is her personality like?
People picture the Legion of the Dead as fatalistic warriors who are grimly eager to impale themselves upon a darkspawn spear. Sigrun defies that. She’s perky, upbeat, with a macabre sense of humor. As bleak as her life is in the Legion, it’s actually a step up from her threadbare existence in Dust Town. So she has that going for her. She also has a fascination with the world above, which she has never seen.

About the only thing she has a proper legionnaire attitude about are the darkspawn. She was initially afraid of them, but as new comrades and friends die one-by-one, it stokes her hatred. Now it burns very bright indeed.

Why would you want her in your party?
As a legionnaire scout, Sigrun has access to abilities which make her very durable in a fight. She’s a dual-wielding rogue who is adept at hiding and sneaking. With a few good runes on her weapons and some of the new epic rogue abilities, she can be a damage-dealing machine who strikes suitable terror in her foes — especially when she strikes from behind, where her quick backstabs add up to impressive numbers.

What inspired the team to make this character?
There are many things in Thedas we want to explore, but the Legion of the Dead is a very intriguing part of dwarven culture, a group of walking “dead” bent on redemption for their scandals, crimes, or atrocities. Grim heroes of the deep. We wanted to explore them more in depth and tie them into the story of Awakening. Having a legionnaire companion is a chance to humanize the Legion and delve into what they’re about. And as far as Sigrun’s charmingly off-beat personality, that’s all thanks to writer Sheryl Chee.

Ferret is the lead designer of the Dragon Age: Origins – Awakening expansion pack. He has been at BioWare since 2006, and throughout his career has worked on games like Dragon Age: Origins, Neverwinter Nights 2, and Knights of the Old Republic 2, among many others. His interests include travelling the world, playing games (duh), and plotting against the poor helpless denizens of Thedas (they had it coming). This is world-traveler Ferret at Karnak in Egypt 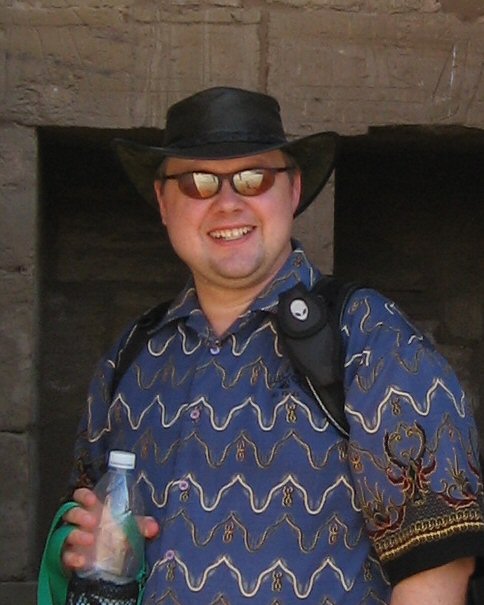