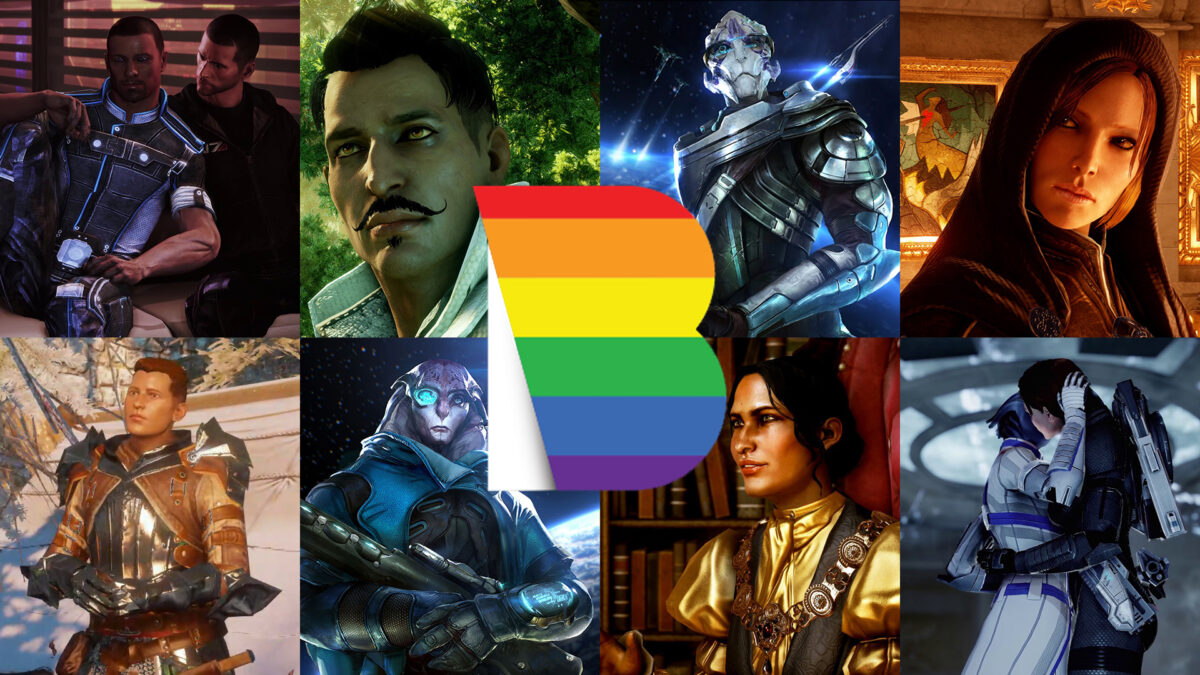 Welcome to a very special entry in our Developer Story series! While previous editions have featured a single subject, in the wake of Pride Month in June, we invited some of our LGBTQIA+ colleagues to talk about what the studio and its games mean to them as queer folks. So please allow us to introduce you to Technical Product manager Lina Anderson, Technical Animator Samantha Wald, Programmer Rachel Hammond, and Cinematic Designer Mikayla Stock, who were all kind enough to share their personal histories with us.

How did you end up at BioWare?

RACHEL: Game development was something I’ve wanted to do my entire life, from when I first played with our family’s Atari and NES and on through all my childhood. By the time I got to college, I’d fallen in love with programming as well, so I joined my campus’ Game Developer Association, where I made friends and contacts who helped me land my first job in the industry a bit over 15 years ago. I worked with a few smaller companies before getting my job with BioWare 11 years ago, and I’ve been here ever since.

SAMANTHA: My path into the industry was a lot less direct! I studied broadcasting in college to get into video editing, but I eventually started rendering graphics in 3D. I was instantly hooked, and I started doing rigging for animated shows and films. But I had always been a huge gamer, and about three years ago, I realized my skills would transfer perfectly to technical animation. BioWare has always been one of my favorite studios, and I was so excited when I got the offer to come work here six months ago!

MIKAYLA: I’m relatively new to the games industry, too; I got my start working on 2D educational kids’ games after graduating with a degree in animation. I‘ve been with BioWare for a little over a year now, working on Star Wars™: The Old Republic.

LINA: BioWare is actually my first experience in the games industry, but I’ve been here for over five and a half years. I had dreamed about working in games since I was a kid and was really surprised to get in on my first attempt!

How have BioWare games impacted you as a queer person?

SAMANTHA: As a trans woman, I spent a large majority of my life being uncomfortable with who I am and how I’m perceived by society. Before I transitioned, games were always an outlet for me to feel comfortable and explore my identity; BioWare games in particular gave me that in a completely supportive, non-judgmental space, and I really don’t think I’d be where I am today without them.

LINA: Agreed. Both Mass Effect and Dragon Age were instrumental in helping me rediscover myself. I’d repressed so much over the years, and building characters that reflected aspects of me that I’d been hiding allowed me to safely explore these thoughts and feelings. I found I was able to talk about things I’d previously kept bottled up, using my characters and companions as proxies—something that I wasn’t yet comfortable enough to do on my own. Nobody batted an eye when I talked about Lady Shepard having a fling with Garrus!

MIKAYLA: I also found BioWare games—specifically the Dragon Age games, for me—at a time when I was still kind of figuring out who I was. I was fortunate enough to be raised in an open-minded household, but it’s always different being told something’s okay versus seeing it on screen in front of you, presented as being completely normal, you know?

RACHEL: Yes! Watching them start pushing for more inclusion years ago, allowing gay and bi romance options, that was a real help for me at the time. But even outside of my direct personal experience, it was so good to see that inclusion spreading through the industry.

Why do you think BioWare games resonate so well with queer players?

SAMANTHA: BioWare games have always been about playing your character however you want, so I think it’s exceptionally easy for players to insert themselves into the main character. And since queer folks have had so little representation in the past, BioWare games are likely to be the first place a lot of folks are able to see themselves reflected in media.

MIKAYLA: Right, they provide a space for players to explore their identities. There are so many well-rounded characters that it’s hard not to find a couple that resonate with you, and watching the story of a character you deeply connect with play out can be incredibly cathartic. And it’s about not being afraid to tell LGBTQIA+ stories!

RACHEL: Yes—games that try to be more open and attentive towards queer identities definitely help us find ourselves in them. But they help other people see us too; the benefit doesn’t stop simply with our firsthand experience. It also helps normalize queer identities for other players, letting others know we’re real, we’re normal, we’re part of the industry.

LINA: And the thing for me is that the games don’t just have a couple queer characters you can run into, and then you’re off shooting aliens again. These are characters that we grow with through the series, form bonds with, and can choose to be close to.

Do you think BioWare games have made an impact on the way the industry approaches LGBTQIA+ topics?

MIKAYLA: I think any exposure to LGBTQIA+ topics in games is a step towards normalizing them in the industry, and BioWare’s decision not to shy away from telling those stories, but to embrace them, was a welcome breath of fresh air.

SAMANTHA: And I think that’s really led the way in de-stigmatizing queer relationships in games. By being this inclusive in games that are both successful and popular, they made it clear that queer representation is not a detriment, but actually a positive and something a lot of players are hungry for.

LINA: Yeah, I remember seeing the original Mass Effect making waves for having a same-sex romance option. It was absolutely the first major game I was aware of where this was a thing at all, and I think that by showing you could have a gay romance between a human and an alien and not have retailers refuse to stock your games, that may have opened some eyes and made it an easier pitch.

RACHEL: That’s exactly it. The way BioWare handled inclusion rippled through the industry, leading to other studios leaning into that content, which meant that even more games were comfortable with it. It helped move everyone forward.

Do you feel like BioWare sees and supports its queer employees?

SAMANTHA: To me, the biggest thing I see BioWare doing to support queer employees has been to empower them! I have never seen so many queer people in senior leadership positions as I have in my time here.

MIKAYLA: Everyone I’ve had the pleasure of working with has been nothing but kind and accepting, and I’ve never felt the need to be anything but myself. That fosters such a great sense of communication and community. I don’t feel like I’m living inside a vacuum while I’m working; the rest of the world still exists and its impact on employees is not taken lightly.

RACHEL: I’ve been with BioWare for more than a decade at this point, and I’ve only seen the support for our LGBTQIA+ staff grow. There have been some missteps along the way, sure, but the most important thing I’ve seen is that people are eager to listen, learn, and do better. I’ve seen a great amount of work put in to ensure that happens in every circumstance. When I started here, I was not out to anyone about being trans. I had transitioned years ago but I was afraid to tell anyone. But in my time here I was given the confidence I needed to come out again, on my terms. So many other workplaces I’ve been at pushed me back into the closet, but BioWare helped me actually feel free to express my whole self.

LINA: Oh, absolutely. If I wasn’t in a place like BioWare, I probably still wouldn’t be out. Coming out as trans was terrifying in general, but knowing my manager and leadership were there for me as I announced who I really was made all the difference.

Thanks to Mikayla, Rachel, Samantha, and Lina for sharing their stories. At BioWare, we’re dedicated to a diverse, inclusive culture, and try to show that through our people and our games. Of course, we know there will always be more to learn in order to best support our teams. But we look forward to that continued growth—because while it may no longer be Pride Month, BioWare is always proud of all our colleagues.