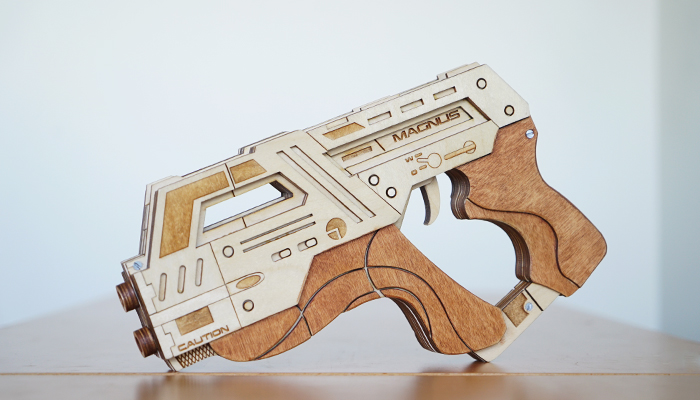 The BioWare community sends us the coolest things.

Travis Ng, an industrial design graduate from San Jose State University, created this one-of-a-kind rubber band gun based off the M-6 Carnifex heavy pistol from Mass Effect. Using sheets of birch wood and a laser cutter, Travis designed the pistol from the ground up, layer by layer. Complete with a loading mechanism, the model is actually semi-automatic! See it in action:

We took a moment to talk to Travis about his creation.

What inspired you to make the Carnifex?

I was inspired to make the Carnifex after successfully making a test prototype of the M-3 Predator. I decided to go full detail with the Carnifex, as it’s one of the most iconic weapons in the Mass Effect universe. It is a weapon most gamers and cosplayers would easily recognize.

How long did it take you to build it?

Although designing the laser-cut pattern did not take too long, it was the test fit of the firing mechanism that took the most time. The firing mechanism was designed based off another rubber band gun that a YouTube user had originally designed (RBguns). All in all, adding up all the time it took to design, test fit, and fully finish: 2-3 months total. It was truly a labor of love.

Want to make a Carnifex yourself? Travis has created an instructables page with all the necessary materials and steps to get you started. Thanks Travis!

You can find more of Travis’ work on his personal website.

Safety disclaimer: This is not a toy and is not intended for use by children. Never shoot rubber bands at other people, pets, and do not shoot it at yourself. Eye protection is recommended when using the rubber band gun.