The next installment of the Dragon Egg Hunt is happening at San Diego Comic Con. Find us at the Dark Horse booth (2615) and Geek & Sundry Lounge Thursday through Sunday from 9am-7pm.

The hunt kicked off at PAX East in Boston, where BioWare and Lone Shark Games revealed the first three eggs. Throughout the rest of the year and into next year, we will be visiting conventions and continuing the hunt for the remaining 15 eggs, starting with San Diego Comic Con.

Dragon egg hunters at PAX East were given the following instructions:

Welcome, heroes, to the Dragon Egg Hunt! You are Inquisition Scouts and your orders are to spend the next year hunting down and winning a collection of dragon eggs. Sinister forces across Thedas want the eggs for their own designs and your job is to stop them. Collect the dragon eggs and protect the people of Thedas!

There are three types of challenges you must face to win dragon eggs:

Players found the Nevarra and Dwarf eggs at the BioWare base, while the Circle of Magi egg could be found online on various BioWare social media channels.

The Nevarra egg was found inside a glass case. Printed on a real egg was a word search. You can watch the video below and see if you can find the words.

Here are the instructions for this challenge:

The nation of Nevarra is famed for its dragon slayers. Indeed, until recently it was believed that they had hunted the great beasts to extinction. With the Dragon Age upon us, a revival of sorts is underway in Nevarra. It is said that some hunters used to eat dragon eggs and now a group of Nevarran nobles wants to try this delicacy for themselves. They have found a stash of stolen dragon eggs, and are preparing to eat them! A friendly Chantry priest has covered each egg in letters, and left you a list of ways to prepare eggs that would put the chefs of Orlais to shame. You can find these methods of preparation on the eggs in word search style, but because dragon eggs have a powerful stench, you cannot open the cases and touch them. Hurry, because if there are this many rogues about, somebody must be getting double-crossed. 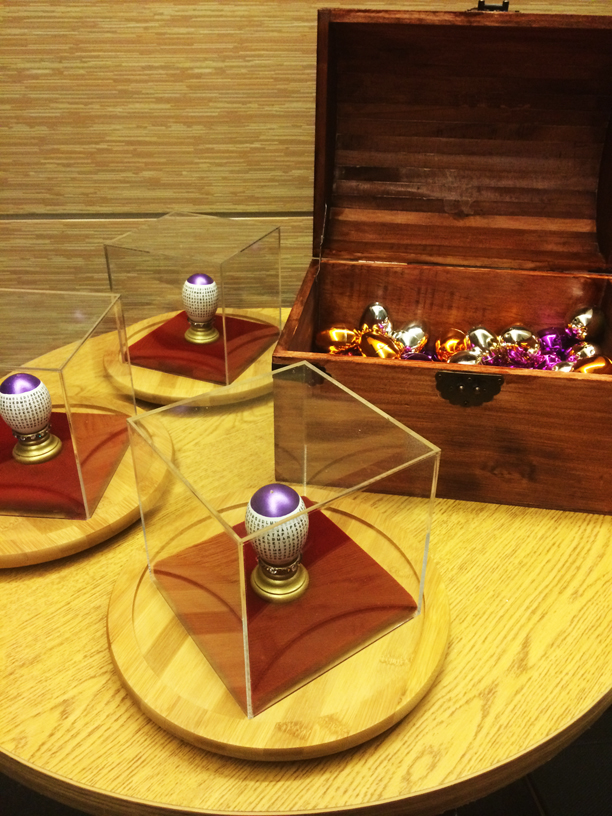 The Dwarves egg featured a box of metallic eggs (gold, silver, and violet), each of which contained a gold coin with a letter on it.

Here are the instructions for this challenge.

The dwarves of Orzammar wage a never-ending battle against the darkspawn in the Deep Roads and they need stout warriors to fight by their side. To aid them and prove your worth as an Inquisition Scout, use your handheld messaging device to capture an image of a living person in powerful weapons and armor from somewhere in this convention. Then, every fifteen minutes, our dwarf will seek out one among you who has captured such an image. That worthy can draw one egg of each color from the chest, examine the eggs’ contents, and replace the eggs. The dwarf will record these findings for all to see. By the end of the weekend, all of you aspiring warriors should be able to combine your knowledge and figure out the five-letter adjective the dwarves left for you. No matter how much Varric insists, that word is not DRUNK!

Players found all the eggs, and discovered that the only letters found in all three colors of egg were the ones featuring the letters in the word COINS.

The answer: COINS is not an adjective, and neither is ICONS. The only adjective with those letters is the word SONIC.

The Circle of Magi egg was found on the BioWare Facebook and other social media sites. It consisted of 12 pictures, each with a confounding trivia question.

Here are the instructions to this challenge.

Welcome, Inquisition Scouts, to the Dragon Egg Hunt! Throughout the weekend, we will conduct three challenges: two at the PAX East convention, and one here on this strange portal to the Fade. A Circle mage’s mind must be sharp, able to recall the details of a spell while staying alert to the dangers of demonic possession. This challenge involves carefully analyzing a dozen images and answering the questions associated with them. Only those who are knowledgeable in the culture of two worlds will be able to master this perplexing challenge, and gain the mages’ 12-letter answer. Work together, for the spirits of the Fade are tricky and not to be trusted!

The answer: After some questing, online solvers discovered that these images were from the books The Art of Mass Effect and Dragon Age: The World of Thedas. Each occurred on a specific page, but the trivia question applied to the information on that same page in the other book.

The first letters of those answers spelled out CONSECRATION.

Those eggs are just the first three in our continent-spanning Dragon Egg Hunt. Look for more eggs at these conventions and events, and complete the quest!