Today is a HUGE day for Mass Effect 3 fans! Our demo has arrived and can be downloaded to play. No offense to any star-crossed lovers, but I’d say there’s no better way to spend Valentine’s Day than at home with your PC/Xbox/PS3. Maybe pair it with a nice box of chocolates… All of us at BioWare are huge fans of the multiplayer mode in ME3 so you never know when you’ll run into one of us on your squad!

Fans of The Walking Dead will also be in for a treat this Sunday when our big Digic CG trailer “Take Earth Back” will premiere. It’s 90 seconds long, so it’s pretty much going to dominate that commercial break. Watch the video above for a 15 second preview!

Yesterday, we were all set for a live Q&A with combat designer Corey Gaspur and producer Billy Buskell but encountered issues with Livestream that prevented the event. In its place, I asked fans on Twitter to send us questions about multiplayer for our devs to answer. Check out their answers after the cut… 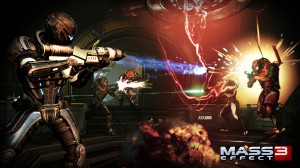 Hi Corey and Billy! Can you please tell us who you are and what your roles are at BioWare?

BB: Hi, my name is Billy Buskell, I’m an Associate Producer on Mass Effect 3.  I’m responsible for the Gameplay, Animation, and Character Art teams on the project.  My role is to help organize the teams and their schedules, prioritize tasking, work with team members to identify and resolve any dependencies between the teams, and assist our leads with guiding the teams towards our goals as a project.  More or less, I help make sure that the teams have what they need to be able to create the amazing experiences in our games.  We have a number of Producers and Project Managers that work with each of the teams and disciplines to ensure the project is progressing as smoothly as possible.

CG: My name is Corey Gaspur, I am a senior combat designer on Mass Effect 3. Myself and the gameplay team’s responsibilities extend to player movement, aiming, cover, powers, weapons, progression, enemies, treasure, armour, melee, etc. There are 7 of us on the team with varied roles and responsibilities.

What were some challenges that the team faced with updating combat gameplay for Mass Effect 3?

CG: The challenges were extensive, following up a critically acclaimed game like ME2 and being the end of the trilogy made us feel like we had to hit it out of the park. We really wanted to bring genre defining third person action into the most comprehensive RPG experience yet.  We have been working on changes for over 2 years now, and we are very excited and humbled to see what our fans and newcomers to the series think.

How did the inclusion of multiplayer affect how you approached combat?

BB: From my personal experience, I think multiplayer ultimately improved the combat in the game as a whole.  The more we played multiplayer as a team (every night at supper for at least an hour 🙂 ) the better we were getting at dealing with enemies, using power combos, etc.  Because of this extensive play testing, the team was really able to ramp up the challenge on the higher difficulties.  To beat Insanity in the single player campaign, you’re really going to have to work for it!  The same can be said for Gold difficulty in multiplayer.  You’re really going to need to prepare for a Gold match much the same way as real life N7 operatives would.  Know the battlefield, bring the right kits, and equip the best gear to get the job done.

CG: Everything in ME3 was designed to feel powerful but balanced; this philosophy applies to SP and MP. The big challenge was ensuring that fans felt that each character and race had unique powers and builds which in-turn make’s each kit interesting and fun to play. It was very important to us that each power and ability matched the characters race, playstyle and backstory.  We pushed very hard to ensure there is very little difference between gameplay in Single Player vs. Multiplayer.

I just started playing multiplayer, and it’s incredibly addicting! What makes it so fun to play for hours on end? What work went into making sure it stayed fresh and challenging?

“Are there any in-game voice chat systems or other ways to communicate in multiplayer?” -@kazalagoopagoo

BB: Absolutely.  Communication is key to an effective co-op squad in Mass Effect 3.  We have in-game voice chat in co-op for all 3 platforms.  Squads that communicate, coordinate, and strategize together will find that they are much better suited to take down the enemy threat.

CG: The team is open to suggestions from the community. As for your favorite races that were not included never say never :}

“Exactly how extensive is weapon customization? Will it be available in multiplayer mode?” -@hyslopma

CG: “If you love the M-8 Avenger you can level it up and mod it to be a competitive end game weapon, the choice is in your hands.” Players can literally handcraft their favorite weapons around their playstyle, build and preference in both MP/SP. With over 40+ weapons and 50+ weapon mods in Mass Effect 3 we pushed very hard to ensure there is zero difference between weapons/mods in Single Player vs. Multiplayer, they are the exact same.

“Are the classes getting new powers or combat abilities?” -@FrostyDanny

CG: Eric Fagnan was largely responsible for the power design in Mass 2 & 3. Each class has new and exciting powers plus unique branching evolutions. It is truly amazing how many kits and unique builds there are. Yesterday I built a Human Female Infiltrator spec’d solely for shotguns and high damage cloak. A pure weapon build, which let me tell you was so much fun, I felt like the Predator :}

“Will there be a lobby system in multiplayer mode where you can create new matches with friends?” -@Ebonhorn

BB: Indeed.  Players will have the opportunity to create a public or private lobby in multiplayer.  Public will allow any other player to join your lobby, whereas Private will allow you to restrict access to the lobby to just the players you invite to join you.  Once your squad is all readied up, you can start the match and kick some enemy tail!

“When you mod a weapon will it affect all weapons of the same type or just that particular weapon?” -@reaperripper

CG: The modding system gives players an unrivaled level of customization over their favorite weapons. Modding affects individual weapons.  For example you could have and Avenger with a barrel mod and stabilizer and a Mattock with a scope and magazine upgrade.

“Are we going to see any return of hybrid classes? I like having my soldier also have some adept powers!”-@Hauntlink

CG: The bonus power system will be returning allowing you to sample your favorite powers.

“Can the omniblade be used as a melee weapon, or is it for finishing moves only?” -@klassensj2

CG: The omni blade can be used at any time by holding down the (B) button, it can be chained in with your regular melee attacks as well and upgraded for devastating damage.

“Can I play multiplayer with random people or do I have to know people to play?” -@KowalRoyal

BB: The choice is yours!  If you have friends that you wish to play with, send them an invite to jump into a lobby with you.  No one else you know online?  Jump into Quick Match and you’ll get paired up with other players looking to take back a piece of the galaxy from the Reapers.

“I just can’t wait to get started. Question: do you think my boss will give me a month off so I can play?”-@WaspyLightning

BB: Now that’s dedication!  It might take some serious Paragon/Renegade persuasion to pull it off, but If you make it happen please send me your gamer tag/username.  I’ll definitely want you in my squad! 🙂

Thanks Corey and Billy! Remember, the early access for the multiplayer demo starts today. Maybe you’ll run into someone from BioWare on your team!