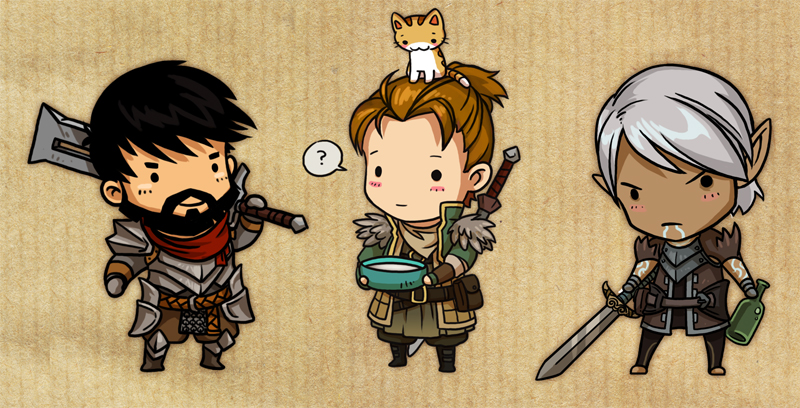 So who am I to judge fanfiction?

The answer I would typically get for that is “you’re a professional writer”. While that’s true, my speciality lies in narrative design for games– and while I’ve written a few novels, I would hardly call them superior works even when held in comparison to similar works in the genre. I’m pretty critical of my own work (though not critical enough, as the first edits I tend to get back from my novels can attest– there is nothing more humbling than that, believe you me), though I’m told that’s not unusual for writers. A writer who’s wholly satisfied with what they produce isn’t likely to improve much. We tend to spend so much in the salt mines, agonizing over every phrasing that pretty soon it’s impossible to see past all the pain. You think it’s all crap, and while it probably is crap it’s also probably not as crappy as you think it is. The art, after all, lies in reaching your audience, not in your authorial intentions or your clever turn of a sentence or your good grammar.

Fanfiction, to me, is filled with plenty of art– despite what some would have you believe. It’s a way for many writers to develop their skills. They cut their teeth by playing in someone else’s sandbox before they develop their own, and it comes with the added benefit that they get to share their love with other fans. Yes, yes, it gets mocked a lot, and while there’s some truth to the idea that there’s a lot of bad fanfiction out there, the same can be said for almost any medium filled with hopeful beginners. What do you want? They’re learning. If there’s any criticism I would level, it’s that many fanfiction writers insulate themselves in the safe cocoon of an appreciative audience so that they never receive the criticism required to grow. There’s no harm in that; not everyone needs to grow as a writer– but those who do find that criticism, somewhere, can turn into pretty fantastic writers. Some of them choose to continue writing fanfiction, because that’s what they enjoy, and that doesn’t lessen their achievement in any way. They’re good, end of sentence.

Which means it was with some trepidation I took on the role of judge in the Dragon Age fanfiction contest, though “fanfiction” in this context probably isn’t accurate. Not many of the writers used our characters as more than cameos– and good thing: if your audience includes a character’s creator, you’re walking into a minefield. Do it well, and you’ll get extra points. Do it poorly, and you’ll lose more points than you can afford. It’s why I don’t tend to read real fanfiction much, as it’s difficult for me to see past all the fingerprints left on my creations, but that doesn’t mean I begrudge them the act. Even so, I don’t write fanfiction, or much short fiction at all. My last attempt was a short story I wrote for Fenris before I even knew the character well, done in a single afternoon on a tight deadline. I cringe when I look at it now, because I know I can do better. So I empathize with fans who engaged in a similar exercise, and hardly felt worthy to sit as judge for their worthy entries– especially knowing how much more trepidation they would feel, suddenly having an audience who was not a fellow fan but someone with proprietary interest in their sandbox.

Initially, I was only to read the top five entries and select a winner from among those. Chris and Jessica didn’t want to demand too much of my time, which I appreciated– yet when I finally read those it didn’t feel right. They were good, but if I was going to pick a winner and say “David Gaider thinks this one is the best”, I needed a larger sampling. So Jessica bundled up all four hundred entries and sent them my way. I still couldn’t physically read every single one, but I recruited the rest of the writing team to go through the pile… together we could cull it down to a group among which I would be happier to personally declare a winner, and we could then honestly say every single entry had been looked at by a BioWare writer. And I would get to read as many as humanly possible. That felt more than fair, I think.

Big task, though, and tough. Initially we thought it would be easier, that you would see very quickly when an entry just wasn’t going to make it to the final pile and thus it would be quickly discarded. There were some of those, sure, but the truth was that most entries were good enough to read to completion… leaving you to sit afterwards and decide just how much you liked it in comparison to the previous. Sometimes it was frustrating. More than once, after finishing a story, I was tempted to immediately email the entrant and tell them “You were doing so well, it was brilliant, and then you…” But I couldn’t do that. Not everyone could take that kind of personal criticism, or might even want it, and I’ve no need to be hurtful.

Still, after reading dozens and dozens of entries, some patterns began to emerge. Things that were irritating, or could have been easily avoided. Things that forced me to remind myself not all these people were experienced writers. There were good things, too, things that inspired me and made me want to sit down and write something of my own– which I wonder if some might find surprising. I don’t. Fans inspire me all the time. It’s why I enjoy interacting with them as much as I do.

So rather than email all those people, I thought I’d put together a small list of “do’s” and “don’t’s” for this kind of writing– with a couple of caveats. One, that this is intended from my perspective as your intended audience and, to a lesser extent, as a writer of some experience. Two, that when it comes to writing, any rule exists to be broken. If you’re going to break rules, however, you need to do it with style.

1. DON’T start with description. This is a difficult point, as writers will have different opinions on when and where to use description– some will include scads and scads, while others will include almost none at all. I fall a bit into the latter category, preferring to give readers a feel for a character or a place and leave the rest to their imagination rather than spout off a laundry list of descriptive terms. So I may be a bit biased. Regardless, of all the places you should include description, the very beginning is not that place. You have one paragraph, maybe two, to grab a reader’s attention. Don’t waste it.

2. DON’T pull your punches. Not every piece of writing needs to be an exercise in emotional turmoil, but if that’s what your writing promises and where you see it going then don’t suddenly veer away and abandon that promise. There could be many reasons to do so. Maybe the idea of such harshness made you sad, or you loved your characters too much to do something so terrible. Trust me: writing is not meant to be a pleasant endeavour, not when you do it well. Some may accuse you of sadism, but they’ll love you all the more for it… and those characters of yours? If they could talk to you, they would not thank you for sparing them, for in gratifying yourself you have robbed them of immortality.

3. DO pay attention to flow. In creative writing, flow is more important than language. Some writers will abuse a thesaurus so badly you half-expect to find it wandering dazed alongside the highway, dress in tatters and lipstick smeared across its face. They laden their prose with words they fancy because they think it makes their writing more poetic. It doesn’t. It makes your prose heavy, and while there might be some readers who appreciate that, it won’t make you a better writer. Be sparing with your language, and realize there isn’t a sentence so clever it shouldn’t be cut if it doesn’t assist your purpose– which is telling a story. Cut out all your extra that’s and but’s and adjectives and adverbs (I often need this advice, myself). Slaughter your word-babies mercilessly, for that pain will put you in the habit of not over-populating your prose to begin with.

4. DO pay attention to your scope. Scope is something with which I am intimately familiar, for it is my eternal enemy in narrative design. Short stories are called that for a reason: they tell a small story, not a big one. Save your sweeping, epic sagas filled with flashbacks and multiple points of view for something larger. For now, decide what piece of a story you’re going to tell. Make it small, and use only the tools absolutely needed to reach your ending. Don’t introduce any more characters than you require, or even give the ones you do introduce names if those names are extraneous. If you end up writing something too large, consider starting over and cutting your scope rather than cutting– cutting is important, but you run the risk of it making your story choppy rather than lean if you cut too deeply.

5. DO the unexpected. There were some entries which made some delightful twists in their tale, without that twist coming across as forced… and there were others who, sadly, wrote something pedestrian when their set-up promised so much more. A well-written tale that goes nowhere interesting is no better than a poorly-written one. If your writing feels like work, and where you end up doesn’t excite you, then write something else… which is not to say that every single word should be honey-golden brilliance dripping from your pen. If you expect that, you will paralyze yourself. When you’re finished, however, what you’ve made should be satisfying. You’ll still think it sucks, because you’re a writer, but at the very least you should feel confident that you stretched your boundaries… even just a little.

I’ll leave it there, and hope those people who wrote an entry feel it more helpful advice than unwarranted criticism. Personally, I think every entrant did something admirable. It’s always risky to put something of yours out into unsafe waters where it can be subjected to scrutiny. A lot of feedback any author gets will be pointless or cruel, but some will be worthy– and, taken to heart, will help you improve. If you’ve learned something, then all the better. I know I have, and I want to thank everyone who entered. The love you poured into our little sandbox was both inspiring as well as humbling, and reminds me why I adore building these lovely sand-castles to begin with.

Find out who won here!

Lead Writer of BioWare's Dragon Age series (and novels). It's a decent gig, and life is good. And, yes, I love bittersweet endings the bestest. www.twitter.com/davidgaider View all posts by David Gaider