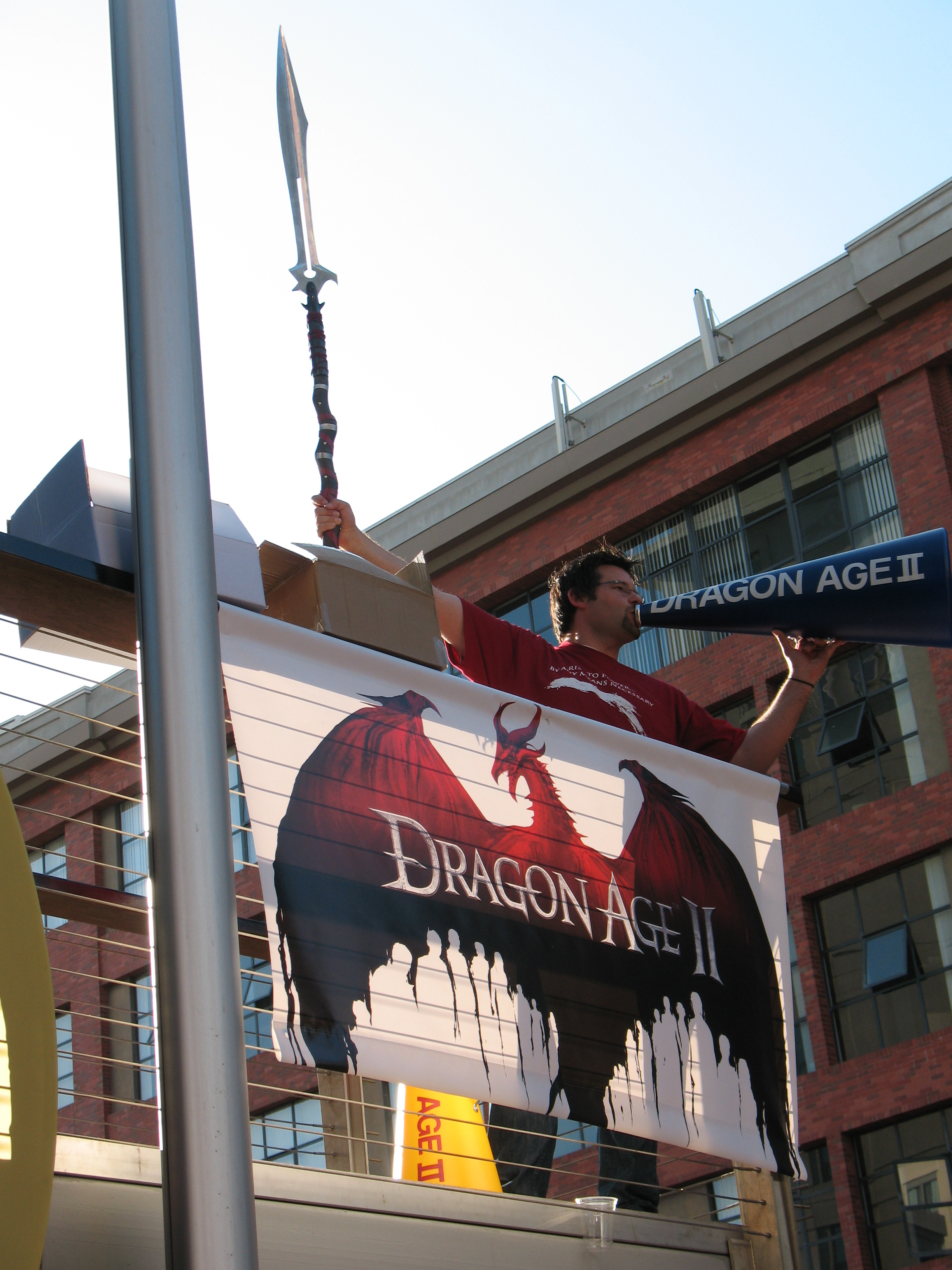 Day 2 has come and gone and we are still standing (or in my case, sitting with sore feet) ready for more. Fans are having an awesome time playing Dragon Age 2, asking questions to Mike Laidlaw or the other developers and getting free swag which this year includes free t-shirts, free blood tattoos and free inflatable swords. The team, such as brand manager David Silverman, all do our part bringing in fans, answering questions and handing out the freebies. Is that a life-size sword/staff Mr Silverman is holding as he rallies attendees to our booth? Why, yes it is. It is a slightly smaller, and 100% more inflatable, version of this staff that we are giving away to fans this year. If you thought last year’s sword was cool, this one is even better. 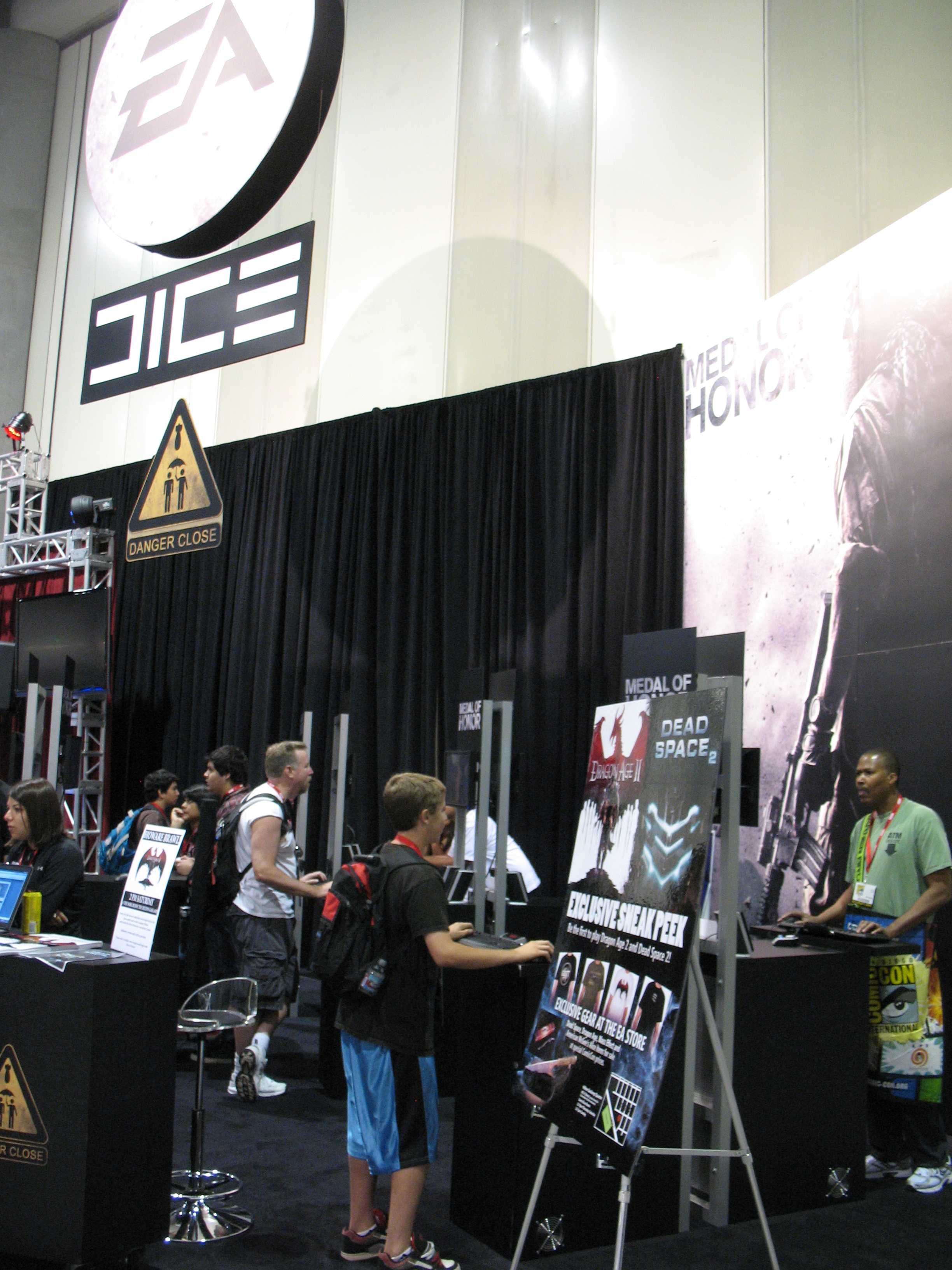 So what exactly is EA doing at Comic Con this year? Well, we have a 2 booth attack going. Inside the convention hall is the Official EA Booth. At the booth fans are able to play a Medal of Honor (a game I am very glad to see come back as the older games were excellent and the new one looks stellar, but I digress) demo and as you can see, they are also helping to promote our booth across the street. And then there is the EA Booth in the Hilton Gaslamp hotel, which is where we are. Along with Dragon Age 2 is Dead Space 2 from Visceral Studios. Dead Space 2 is the sequel to the very atmospheric initial release.  I’ll admit something to you now. 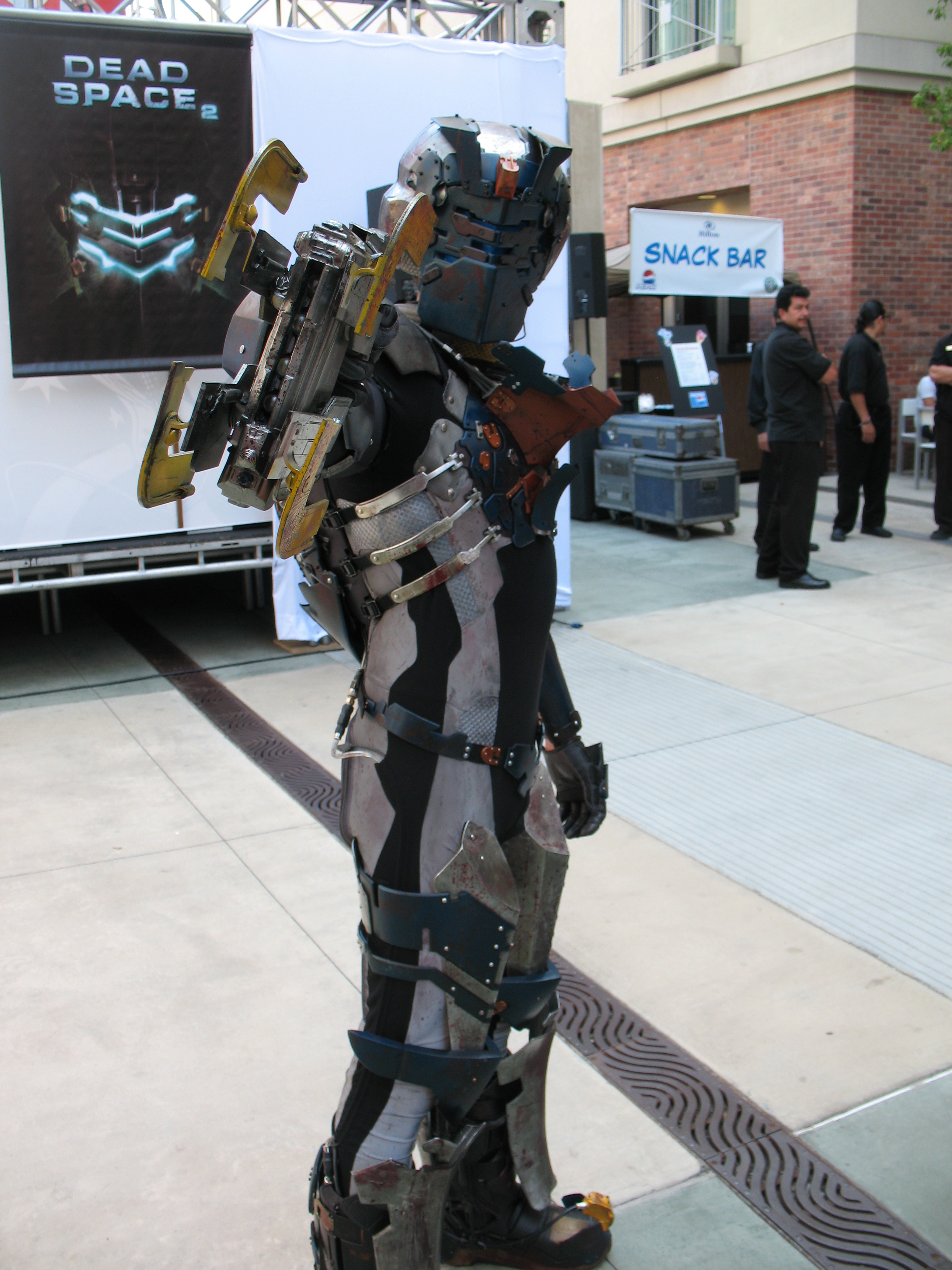 Initially I bought Dead Space on the PC (as I am a FPS nut) and played it, but didn’t like the over-the-shoulder camera view much, so I put it aside. I totally forgot I owned it an, when I learned that we would share space with DS2, I got a copy of DS for the Xbox 360 and played it. I really enjoyed it. I think the whole “Issac in space shooting Necromophs” and their interesting take on how religion fills in was very good. The atmosphere was great with many scary moments and the look of the necromorphs being creative and new. I did think a couple of the boss fights were easier than I thought they’d be, but otherwise it was a great game. Well, Dead Space 2 is even better. Controls are better, lighting and textures are better and everything seems to be better. I’m now really looking forward to the sequel.

Anyways, that’s it for today. Tomorrow I hope to actually get my butt into the convention center, look for swag, pick up some back issues, etc. Plus, we have an epic inflatable sword battle planned, so we’ll see who loses an eye. More to come tomorrow.