Part 1 of 3, by Evil Chris Priestly

BioWare is a proudly Canadian company. Sure, we have a lot of international employees, but we were founded by Canadians in Edmonton Alberta and we remain very proud of being a Canadian game development studio. However, even though we are proud to be Canadian, we’ve never really had a presence at Canadian gaming events. Sure, we always attend E3 and lately we’ve been attending other international shows like GamesCom in Germany or PAX in Seattle (more on PAX later this week), but we’ve never really done much here in our home country. Well, all that changed this past weekend as the BioWare Community Team took Dragon Age Origins to Fan Expo Canada.

Fan Expo takes place at the Metro Convention Center in Toronto Ontario and is sort of 4 smaller conventions all wrapped up into one big show. In past years, Toronto hosted a comic book show, one dedicated to horror, one on Sci-Fi and one on Anime. They realized that instead of having 4 small shows with only so-so attendance to each, they could combine and have one massive show that would pull in fans from all groups simultaneously. This year, they were hoping to have around 50,000 fans come out, but on Saturday the lines were SO huge, I think they will have easily beat that number this year.

So what goes on at Fan Expo? Well, as I said, it is a combination of Sci-Fi, comic books, anime and horror. There are the usual booths selling their back issue comics or gothic clothes or Pocky or whatever. There were a large number of celebrities attending, like Bruce Campbell, Roger Corman and Leonard Nemoy, signing autographs and taking pictures with fans. There were some big companies like DC Comics, Disney and Warner Brothers present showing off their upcoming projects. And there was a staggering amount of fans in costumes. Don’t get me wrong, there are always fans in costume at conventions, but I say that I saw more fans in costumes at Fan Expo than any other Con I have been to. I saw Leatherfaces chasing after Narutos and Squirrel Girl doing battle with Ghostbusters as a squad of Yeoman Brands watched. We even had a few “famous” characters come by the booth to try out Dragon Age: Origins, but sadly, their superpowers couldn’t prevail over the Darkspawn Blight. 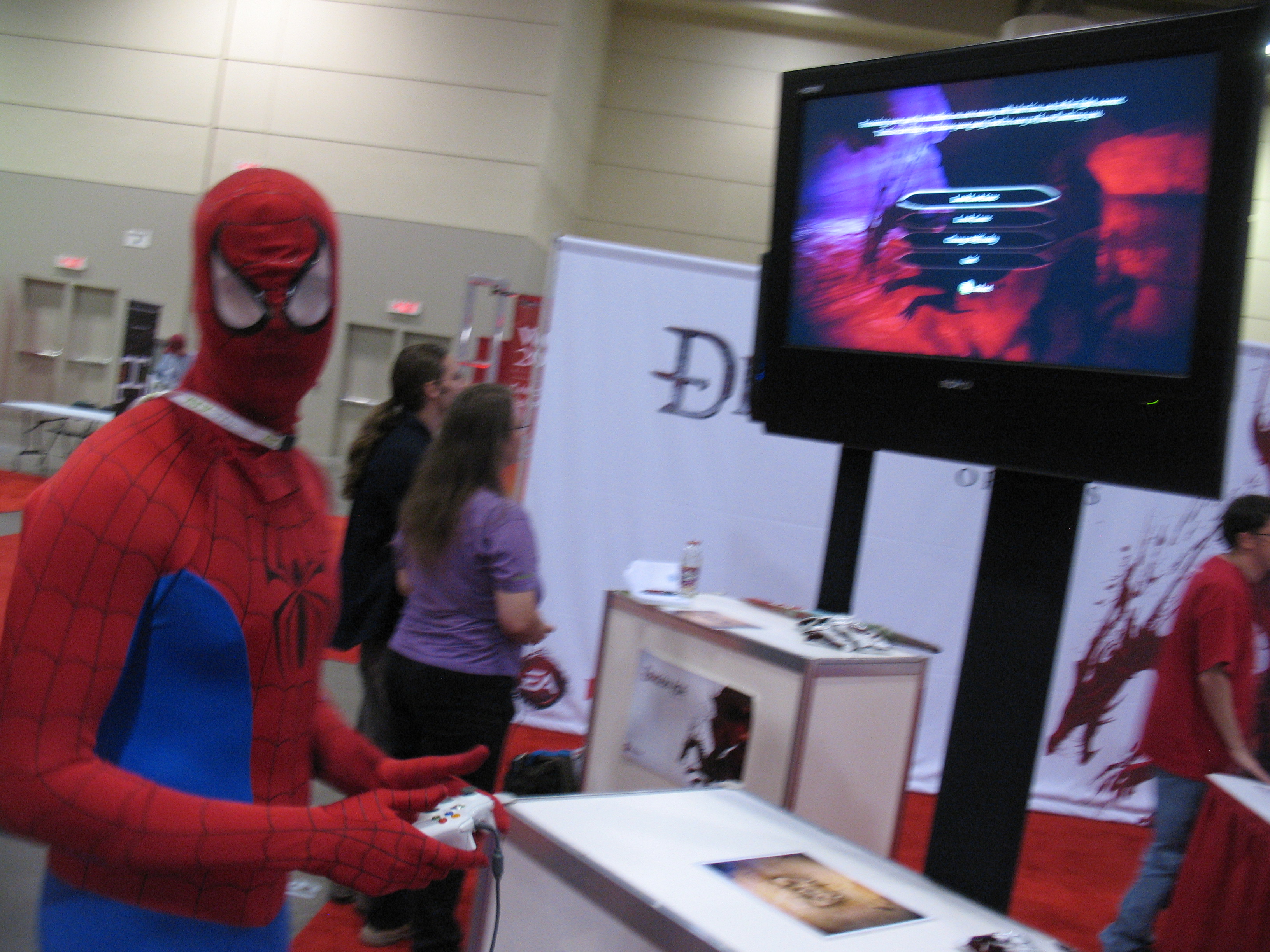 I should also call out one more very cool thing. There are always a number of artists at these cons. Sometimes they are famous artists working on comics, movies and TV, other times they are up and coming artists starting up their own projects. Now I have always said that of all the departments at BioWare I am always the most impressed by our artists. It may be because I like to think that I can write a bit and I also like to think that if I went back to school and applied myself, I could learn the basics of programming. However, I know for a fact that I cannot “art”. I have tried to “art” even taking a course at college (where my Prof suggested I transfer to drama), so I am always in awe of the talent that we have at BioWare. Well, this year at Fan Expo, a few BioWare staffers and friends have started up The Anthology Project. If you are looking for the “delirious pursuit of compelling narrative and notable artistic work in the medium of sequential art”, you should really check it out. 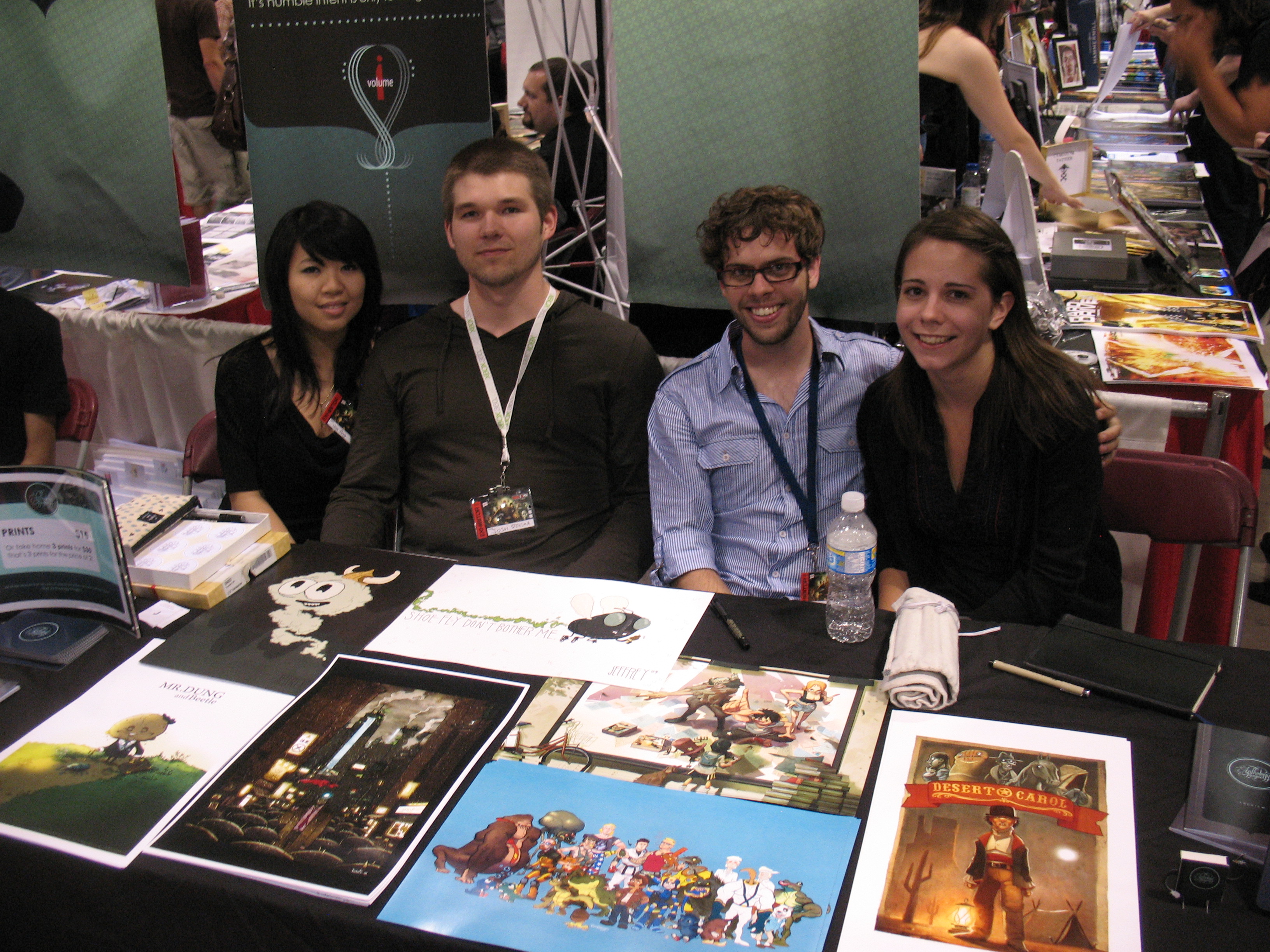 Well, we have wrapped up another successful convention. We had a great time this year at Fan Expo and I hope to return again next year. Why? Well, because it was a heck of a good time and, frankly, because Canada rocks. This week is the start of our last official Community Convention of the summer as we head to Seattle Washington for PAX, the Penny Arcade Expo. Keep track of us on Twitter at biofeed and check out our convention pictures on the Community Flickr account here: Flickr