Part 3 of 3, by Evil Chris Priestly

When last we left our heroes…

In my first blog entry I explained that how during a trip to the San Diego Comic Con in 2008 I thought BioWare should show off our games at the 2009 convention. And in my last blog entry I explained that BioWare did indeed plan to show off Dragon Age: Origins and had a great idea for a Gaming Lounge at this year’s convention. Instead of being a small part of the huge convention itself we would have our own space at a nearby hotel to give our games the best exposure to as many fans as we could attract. The only problem was the hotel could not rent us space to do so without permission for the Comic Con organizers.

I would love to now write about the incredible battle where little tiny me goes up against the face of huge Comic Con and how they tried to beat me down but through dogged preservation and a never-say-die attitude I managed to win out and was carried through the streets to great acclaim from fans. This would be turned into a movie possibly starring Seth Rogan as me, Christopher Walken as the bad guy and Yvonne Strahovski as my wife (hey, I can dream can’t I?). The problem would be that it just wouldn’t be true. Sure, the Convention organizers are very careful about what they allow to occur during the convention, but they listened to what we asked, took a day to think about it, and approved it with no hassle at all.

So we were all set. We now had permission to hold our EA Gamer Lounge. Dragon Age: Origins along with Battlefield 1943, Left 4 Dead 2 and Battlefield Bad Company 2 set up to design a space where our fans could come in after a hard day at the Con, get to play our great games, have a relaxing beverage and get their hands on some cool free schwag. A quick comment about our free schwag, ours was awesome. Not to put down the other three games, but they just did t-shirts (which were cool and all, but still, just t-shirts) WE did inflatable swords. We took the Grey Warden sword from inside the game and made them so they could be blown up by fans and swung at each other with only the smallest of chances to do any harm. These went over super well. No matter where you went around San Diego you would see people young and old with a sword tucked in a belt or sticking out of a backpack. These were definitely a hot item at the con and we ended up giving away 30,000 in the 4 days we were there.

Our Dragon Age: Origins room in the gamer lounge came out great. We set up 6 PC stations and 8 Xbox 360 stations for hands on gameplay. Players were able to experience some of the Human Noble origin story as well as combat inside the Tower of Ishal against an Ogre. We also set up a stage where Lead Designer Mike Laidlaw gave presentations on the game and a photo-op wall where people could have their picture taken as a Grey Warden. To help out at the booth along with me and Mike were Matt Goldman (Lead Artist), David Silverman (Brand Manager), Jay Watamaniuk (Community Manager), Fernando Melo (Producer), Ross Gardner (Lead Programmer), Mike Avery & Bruce Venne (both skilled QA and demo experts). Everyone pitched in whether it was coaching people play the game at the stations or helping out the Street Team attract attention. 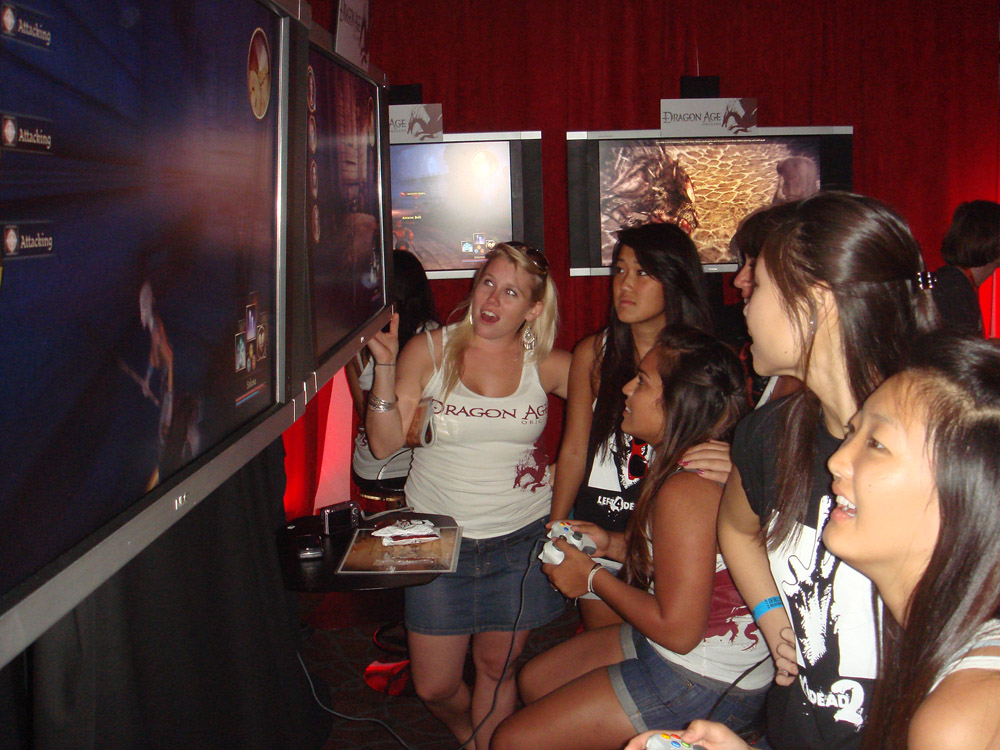 Didn’t I mention the street team? Well, because we knew that the main draw at Comic Con will always be the Con itself we knew we would need to attract folks across the street to our gaming lounge. To help us attract traffic we hired the street team which was made up of Mike, Mo, Q and some fine ladies from a local sorority (David Silverman’s GF went to University in San Diego and asked her Sisters to help us out. They were all lovely and very keen to help our Dragon Age: Origins once they played it for themselves). It was their job to stand down on the street in the blazing sun, passing out window clings, t-shirts and inflatable swords and driving folks over to our lounge. They did an incredible job as we had a line out the door each day and all 4 games had full stations all day long.

So, was our Gaming Lounge at Comic Con a success? Absolutely. Fans had a great time. We had a great time. Everyone who experienced Dragon Age: Origins walked away happy and even though those of us who worked the room were tired, at the end of it all, we knew we had done well and that it was a hit. What was my favorite thing about the room this year? Well, there was lots of good stuff, but I think my highlight was having actor Steve Valentine stop by the booth. Many people know Steve from his work on the Crossing Jordan TV show. 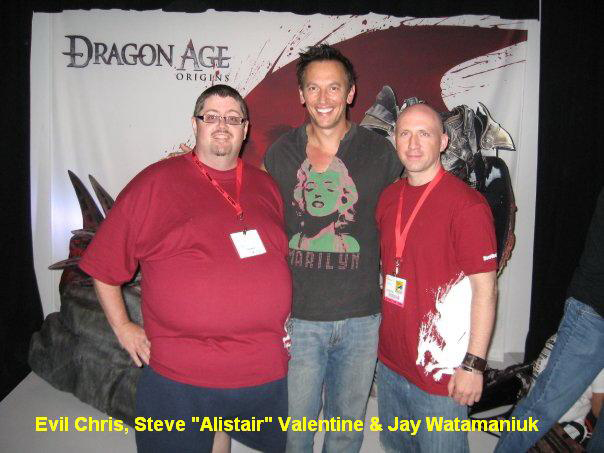 Not everyone knows that he is also the voice of Alistair in Dragon Age: Origins. He brought his wife to the booth to show her who he was in the game and was super nice. He shook hands, asked questions and took pictures with us all. I’ve heard many actors at Cons can be kind of aloof, but Steve was friendly and a great guy which makes him my Con highlight.

Will BioWare be back to the San Diego Comic Con in 2010? I’m not sure. By next summer we will have shipped both Dragon Age: Origins and Mass Effect 2, so you would think we wouldn’t have anything to show off. However I know we have a few surprises in store. So in the nature of any good comic book, don’t be surprised if BioWare makes an unexpected appearance when you least expect us. Or, as I like to say, Stay Tuned till next year.