Even in the most emotionally engaging story of tragic love, stalwart courage and unswerving devotion you will generally need to resolve conflict by punching someone in the face. That what our forefathers taught us and I’m O.K. with that. And while our lives generally involved being upset over printer stalls or an incorrectly made café latte I fondly imagine if shot in the shoulder I could still take back control of the plane from escaped convicts and land that sucker in the middle of Vegas (Bruckheimer! BRUCKHEIMER! Gadddamit! Whooo!). I admit however, in my darkest, truest underbelly that I would probably curl up in my own filth and ask if everyone could stop blinking so loud and weep like the big kids broke my Easy Bake oven. I like fantasy violence. This is why I play games.

Let’s be honest here if the heart-pounding climax in a game, movie or TV show involves a heated debate between two grandmothers on the merits of Alpaca vs. Qiviut yarn you might set yourself alight in disgust for sitting through that. If, however, the grandmothers battled to the death over something called the Y.A.R.N INITIATIVE in alien power-armor atop an active volcano while lettuce-fed attack alligators with bombs for shoes were dropped from AH-64 Apache helicopters you consider that money well-spent. BRUCKHEIMER!

I don’t pretend to know what genetic quirk settled into the deep, gluey fiber of our being to make this a stone cold fact but there it is; undeniable. Fantasy violence for fantasy violence’s sake however is not very interesting. You need to be invested in the situation or it must at least be awesome. If you are unsure if an act of violence in a game or movie is awesome use the following rating system:

Give the scene one point for each element present: 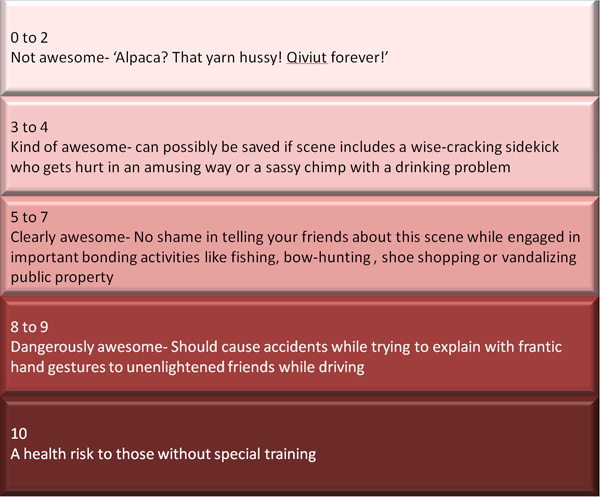