So demoing can be very stressful. You are responsible for presenting the game to the public. A game that the team has been pouring its hearts and souls into, and working long hours to produce. A game that has been years in development. And then when are finally ready to show the game to the press and public it all falls to me. You start imagining how all of the team’s hard work will be utterly destroyed by something you do during the demo. It doesn’t help that demoing involves a lot of waiting. For the sales meeting we arrived the day before so I had the whole evening and most of the next day to imagine nightmare scenarios.

Doing demos at larger events like E3 or the European Games Convention is different. You do demos all day back to back so there is not as much waiting. But it is more tiring. 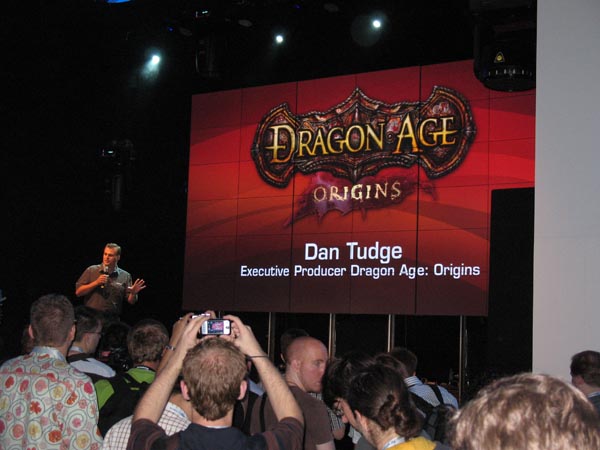 Last year we showed Dragon Age: Origins (tminstoreslaterthisyearforpcandconsoles) at the Games Convention in Leipzig. After checking to our hotel we hopped over to the Convention Centre to set up. Our first demos were the next day. We brought over disks to install the build onto machines provided at the Convention Centre. There were problems. I don’t remember the specifics, but the game wouldn’t run. Ok, no reason to panic, that’s why we brought over our own demo machines. As a result, I go back to the hotel and grab the demo box. And I mean demo BOX. The computer was packed in the box we bought it in so this thing was huge. Carrying it through an airport from the luggage carrier to a taxi can be tiring. I had to transport it through the entire Convention Centre. Now I’m not a large man. Forget the image of the burly, rugged Alberta oil-worker. Those guys are from Newfoundland. I’m not that guy. On top of that I hadn’t slept in the past twenty-four hours. My flight out of Edmonton was insanely early, so to get to the airport in time I had to leave my place at around 3:30am. I figured heck, rather than waking up that early I just won’t go to sleep. The only sleep I was working on was the little naps I was able to take during the flight. So after carrying, pushing, pulling, lugging, shoving, kicking and hauling the box, (which had increased in density a thousand-fold by this time) all the way to the EA booth I was exhausted. I collapsed in the corner and slept, while the EA IT guys set up the machine.

Which as it turned out was the only sleep I got that day. That night I didn’t get any sleep. I was too nervous about the demos the next day. The lack of sleep didn’t affect me though. I don’t it did anyways. I don’t remember anything from that day, but they still want me to do demos, so I guess nothing bad happened.

Bruce Venne got a job in the BioWare QA department after spending two week sitting on a crate in James Ohlen’s office playing Knights of the Old Republic. Afterwards, Bruce got his own desk, in the hallway of the old Whyte Ave office, to test the NWN expansion packs. He now applies his English degree and Library Technicians diploma to design testing on Dragon Age, and filing monthly reports to HR about the behavior of the Marketing department during press tours.