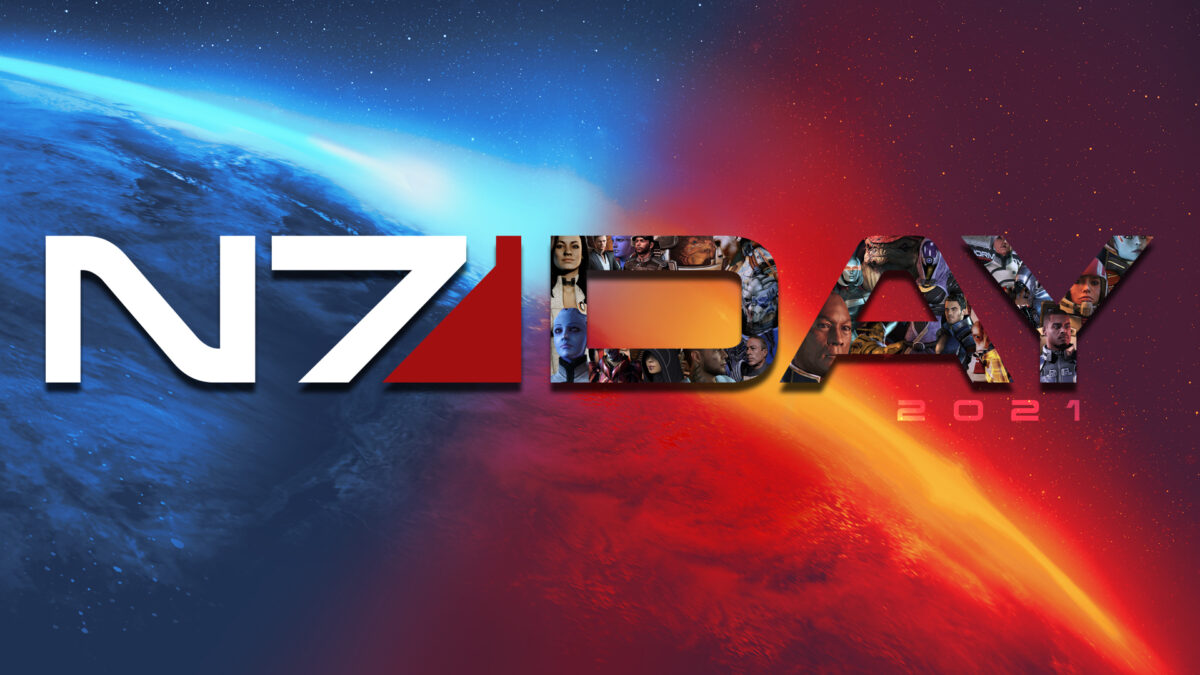 Join us as we celebrate all things Mass Effect

Fourteen years can seem like ages, but it can also seem like barely the blink of an eye. That’s one of the reasons we celebrate N7 Day: to pause and take stock; to take a moment to appreciate all things Mass Effect. And there’s a lot to appreciate! So this year, we’d like to invite you to join us on a Mako ride down memory lane as we look at Mass Effect’s past and present, celebrate the wonderful community that makes it so special (that’s you!), and invite you to join us in the celebration with some special N7 Day surprises below.

A DAY FOR LOOKING BACK

The thing about Mass Effect is that it can be a different game for different people. So much of the series is about the personal decisions each player makes, and how that affects the events that happen later. That is, of course, by design — because that’s what we love about RPGs ourselves!

Take Mac for example, who’s worked on the whole series and was most recently the Project Director for Mass Effect Legendary Edition. “It’s about freedom to choose,” he says. “My character. My story. My playstyle. And, naturally, dealing with all the consequences from those choices.”

And Mike, who’s been on the franchise for over a decade and is now Project Director for the next Mass Effect game, feels similarly…though he’s more about that #renegade life. “What I love most about RPGs,” he says, “is to be as morally abhorrent as possible. I want to see how the game reacts to that!”

That focus on personal choice and branching narrative has been a touchstone of the series since the beginning. Well, OK, maybe not the very beginning. In the earliest days of production, Mac says, “there was just the barest idea of what it would be. We knew we wanted a grand space opera with inspiration from ‘80s dystopian sci-fi films. The rest was a blank slate.”

But the key elements of player choice and character development quickly became a crucial part of the game — and then of three more games, loads of expansions, and a huge remaster, over fourteen exciting years. From the first game’s debut in 2007 through to the release of Mass Effect: Andromeda 10 years later, we’ve watched the Mass Effect universe grow from games into novels, comics, statues — even board games. And just this year we returned to the Normandy for a refreshed version of the original trilogy, in the form of Mass Effect Legendary Edition. With massively updated graphics, key control adjustments, important changes to game balance, and a ton of other improvements, the Legendary Edition brought the original trilogy to a whole new generation of players. And the response has been amazing! We’ve been so happy to hear how much these revitalized editions have meant to you, from first-time players to returning veterans.

A DAY FOR LOOKING AROUND

On N7 Day, we celebrate all things Mass Effect — and most importantly, we celebrate you, the fans. This universe wouldn’t be much without you to explore it. You’ve shared with us your love for the series through art, fan fiction, cosplay, and countless other gestures of appreciation that make us feel so grateful, in turn, to have you as fans. So as a token of thanks, we’ll be sharing some of your creations and your celebrations today and in the coming days.

On top of that, we’ve got some other fun stuff lined up for you today. Like…

We’ve also been super-interested to learn what kind of choices you’ve been making in your own adventures while playing the Legendary Edition. A few months ago we shared some statistics and learned that “Kaidan or Ashley” wasn’t an easy decision for you all either so maybe Mac and Mike were onto something with their choices; 60% of you chose Ashley, while 40% chose Kaidan. For something that makes such an impact through the next two games, that’s a surprisingly close split. We also learned that Garrus was the most likely to survive the Suicide Mission — but Mordin was the least likely. And he thought you cared!

For this year’s celebration, we dove even deeper into how you navigated the branching pathways of the series, and we learned some interesting new details. For example, most of you elected to save the Council at the end of the first game — but at 69% to 31%, it wasn’t exactly a foregone conclusion. We also learned that as beloved as Garrus has been through the years, a surprising 15% of you didn’t recruit him to your team at all! Perhaps less surprisingly, you folks were not fans of Ambassador Udina; given the option to select the first human Councilor, he finished a distant third…behind “no choice.” Ouch.

The results are fascinating across the board, so take a look at the whole lineup:

AND A DAY FOR LOOKING FORWARD

N7 Day has also often been a chance to talk about the future, both for Mass Effect and for the games industry as a whole. This year, looking forward is even more valuable, as we celebrate another N7 Day during a global pandemic that impacts pretty much everything about the industry and the people in it.

“I can’t wait to answer fans’ questions in person!” Mac says. “Whether it’s panels, or signings, or BioWare Base…it’s always fun to just be in the room with the fans and let them ask whatever they want.”

“Meeting franchise fans is always cool,” agrees Mike, “and it’s good to see how the games have impacted people’s lives. Personally though, I miss the cosplay. I remember at San Diego Comic Con a number of years back, how many groups of Mass Effect cosplayers there were. I want to see that continue. And hopefully, we can create new characters that everyone will love and continue the tradition.”

We are, of course, hard at work on the next adventure in the Mass Effect universe. Until then, please accept our most humble thanks to you for accompanying us on this journey. We know we couldn’t do it without you — on N7 Day, or any other day.

**OFFERS MAY VARY OR CHANGE. SEE RETAILER SITE FOR DETAILS.