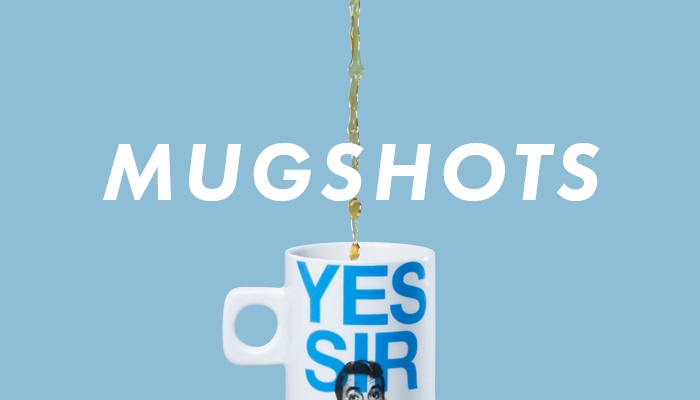 Coffee and tea propel productivity in offices across the world, and BioWare is no exception to this rule. Behind each fresh brew is a vessel to contain these life-giving liquids. And when you use the same mug each morning, you start to get attached to it.

Below is a small cross-section of some of our developers’ prized porcelain and the stories that come with them. 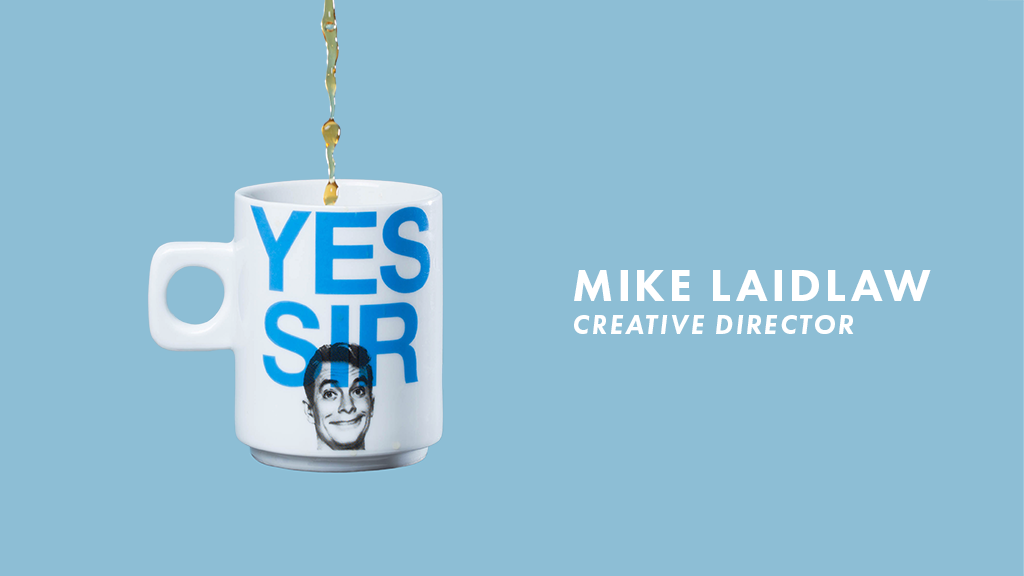 My “Yes Sir” mug was a gift from Patrick Weekes.

I’ve had the pleasure of working with Patrick across multiple projects, and have discovered over the years that Patrick has an amazing knack for on-the-fly sycophancy. At a moment’s notice, he’s capable of delivering a remarkably sarcastic, yet utterly obsequious, compliment on one’s skills as a leader or manager, usually with the phrase “MisterLaidlawSir” appended to the end as a sign of joking (non-) respect.

Funnily, every time I look at it, the “Yes Sir” mug brings to mind a time he deployed this skill not with me but with Dragon Age executive producer Mark Darrah. The quote—which should be delivered in an overly keen and intensely nasal manner—was “Well, MisterDarrahSir, if I’ve achieved anything at this company, it’s because you inspired me to reach up, so that I might kiss the ass of giants!” 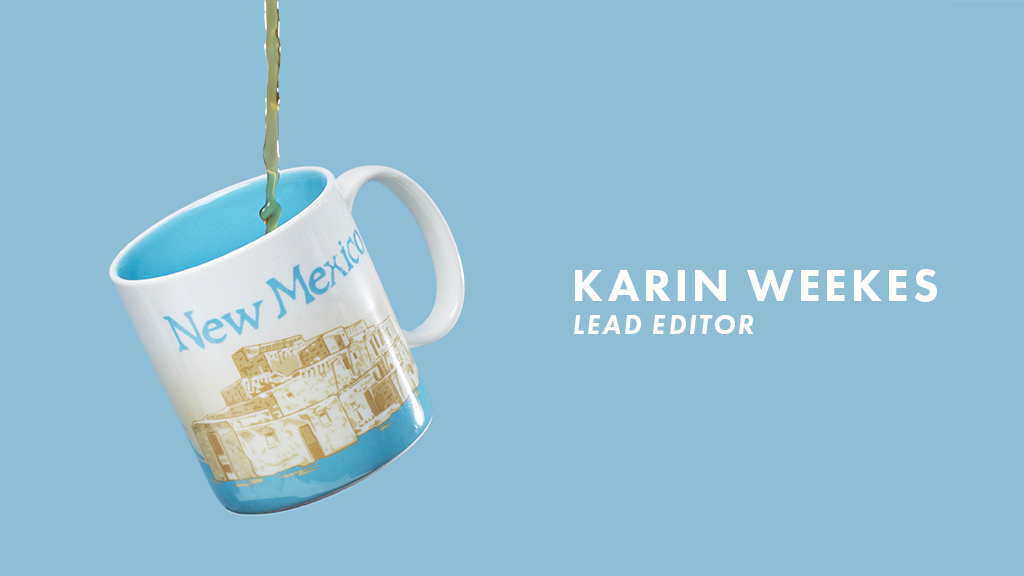 I grew up in New Mexico, and this mug makes me happy when I miss it: the blue is the color of the summer sky, and I flew hot-air balloons when I lived there. We did a high-altitude flight once, and were briefly above the Sandia Mountains just like the balloons in this picture. Taos Pueblo makes me feel connected with my native roots. It all makes me smile. Also the mug holds an entire can of soup, which is perfection. 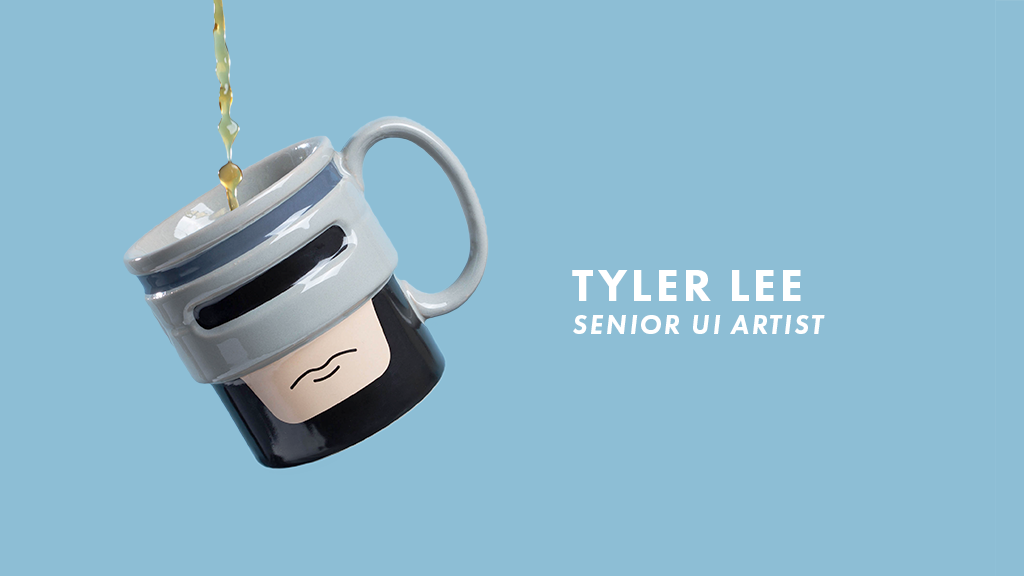 Robocup, a birthday present from one of BioWare’s finest producers. Coffee or tea, you’re drinking with me! 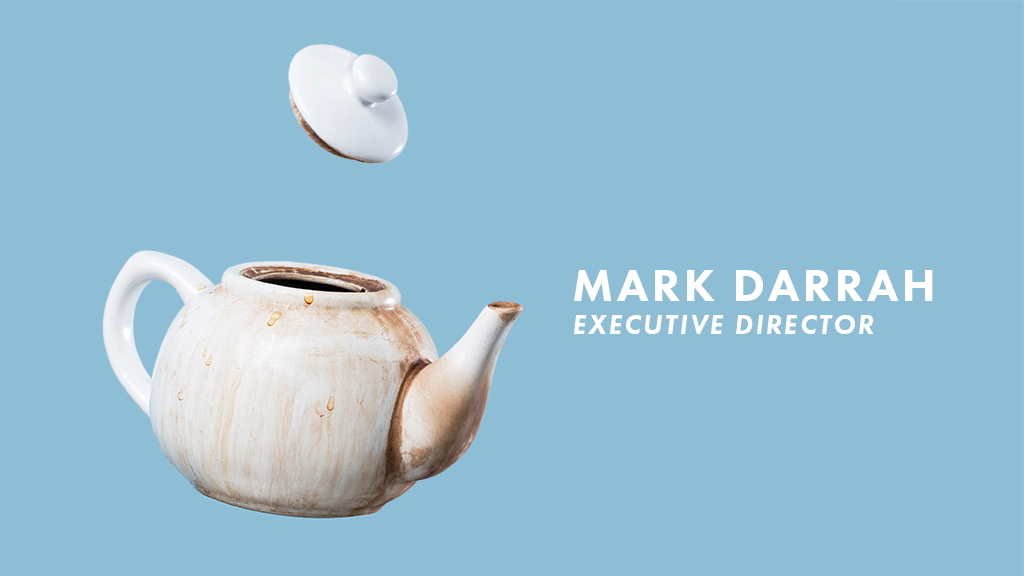 Holy !@#$% why is it so dirty? – 1. You aren’t supposed to wash your teapot; it improves the laminar flow of the pour and reduces drips (though I can find no internet corroboration of this). 2. Laziness. 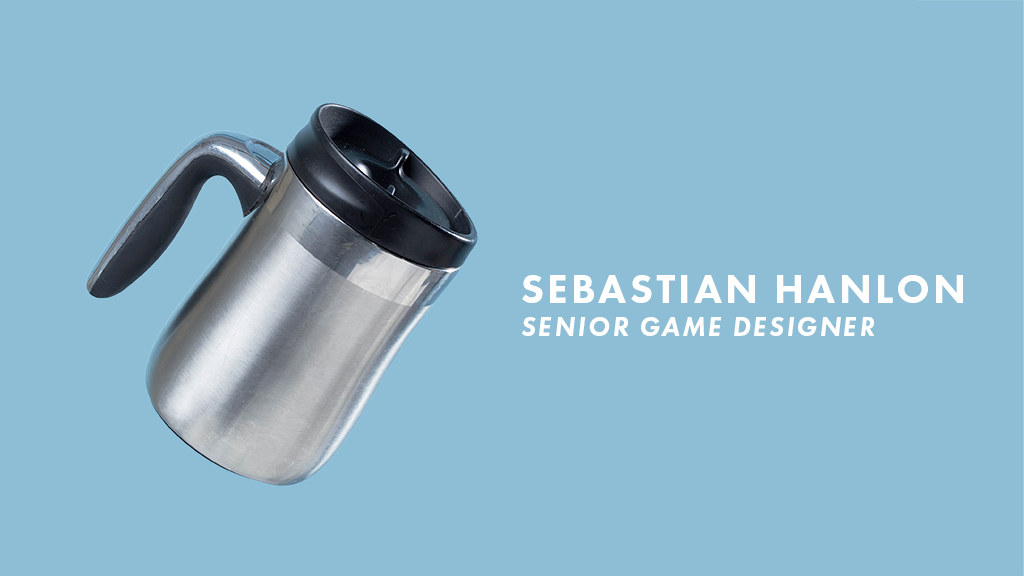 I use an Aladdin Migo wide-base travel mug with a very secure lid—allowing me to carry coffee without spilling, thus compensating for my low DEX score. 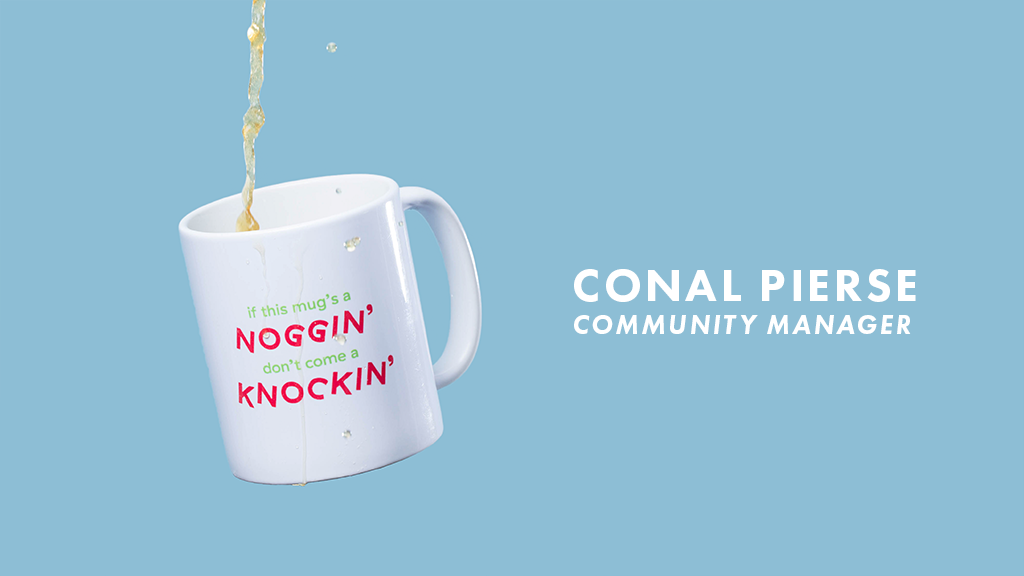 I wrote on Twitter that I wished I had a mug that said, “If this mug’s a noggin’, don’t come a knockin’,” and a few weeks later, this showed up in the mail. If I’d known that’s what I was spending my wish on, I would have asked for something less selfish. Like year-round egg nog. 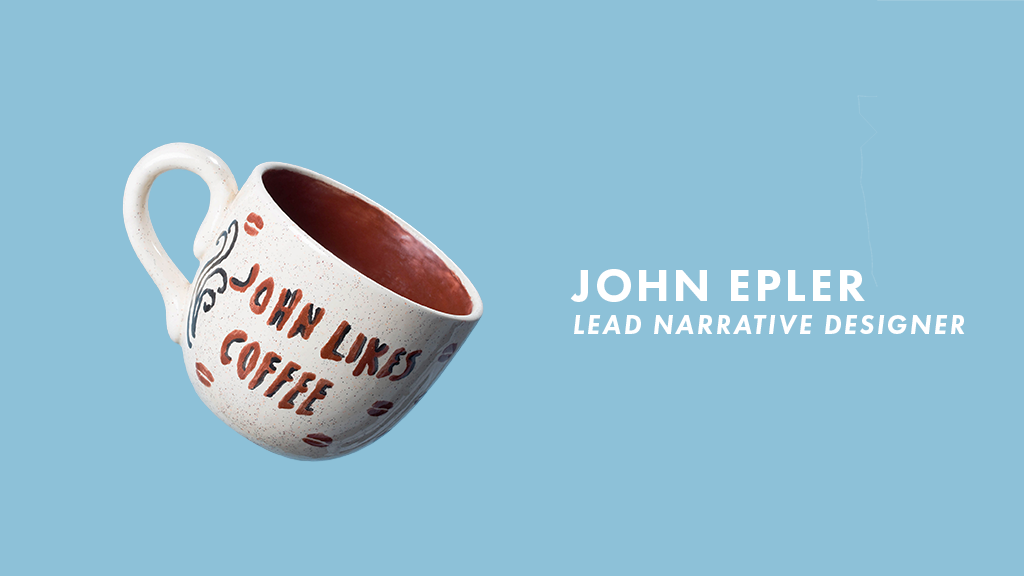 My wife made the mug for me during Dragon Age: Inquisition‘s development. I’ve been a coffee drinker since age 16, and normal coffee cups didn’t hold enough coffee for me. With the aptly named “John Likes Coffee” mug, I could put four cups in and then drink it all before it got cold. My caffeine needs have gone down since then, but the mug waits—ready to re-enter service when I need it most. 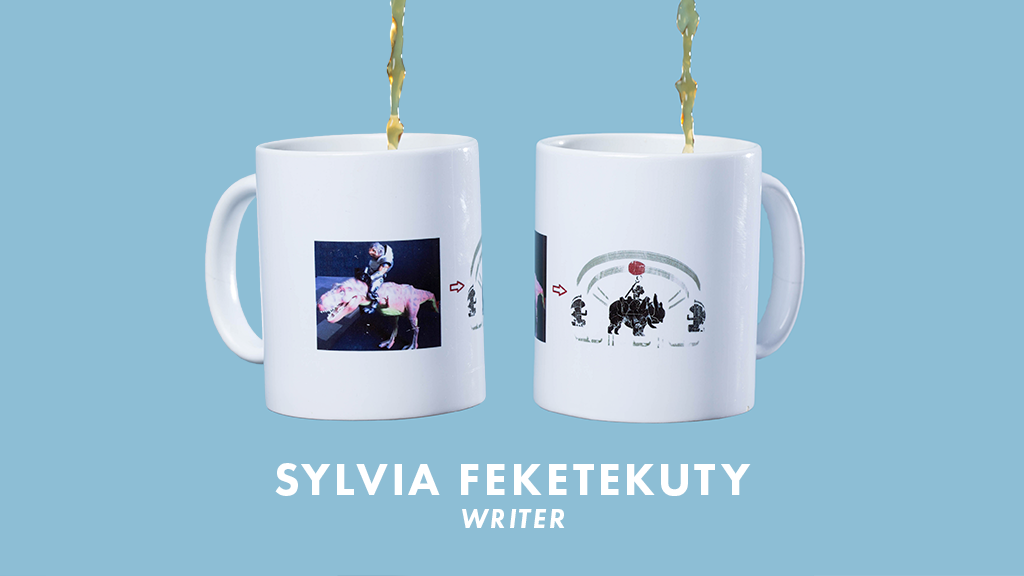 This mug belongs to Sylvia Feketekuty and is a survivor of a set of mugs Karin Weekes made for the ME3 writing pit just before Mass Effect 3 went gold. The game includes a “cave drawing” of a krogan riding a dinosaur, and these mugs celebrate the team moment that lead to it: John Dombrow had several awesome dinosaurs on his desk, and Karin had a Grunt action figure on hers. During various spirited writer room discussions, Grunt MAY have ridden a few dinosaurs. This was around the time Preston Watamaniuk, our Lead Designer, wanted the writing team to do some ambient planet-scan-and-collect missions related to general war assets, and he’d written out an asset list for us.

Patrick: HE thought he was putting in general examples, but >I< thought he wanted exactly what he had written in there. Like “Fossilized Kakliosaur,” which I looked at and went, “How the heck am I supposed to make that help the war effort?”

Sylvia: At which point a “Jurassic Park dinosaur-in-amber” discussion started. We were all maybe a little punchy, which explains why it seemed like such a great idea.

Karin: So Patrick wrote it up and sent them back for review. When Preston subsequently came into the room to say, “Wait, WHAT is going ON in here? You actually made kakliosaurs?”, we launched into a simultaneous, impassioned defense of the idea. Preston remained dubious until John put Grunt on the T-Rex to illustrate the awesomeness of KROGAN RIDING DINOSAURS, and that stunning visual won him over.

John: About that time, I needed a cave painting in the Genophage mission to show off ancient krogan cave art. Thanks to our awesome artists, that painting eventually came to fruition; we put it into the caves where Shepard and squadmates get lost for a bit.

Anything is possible when you work as a team.