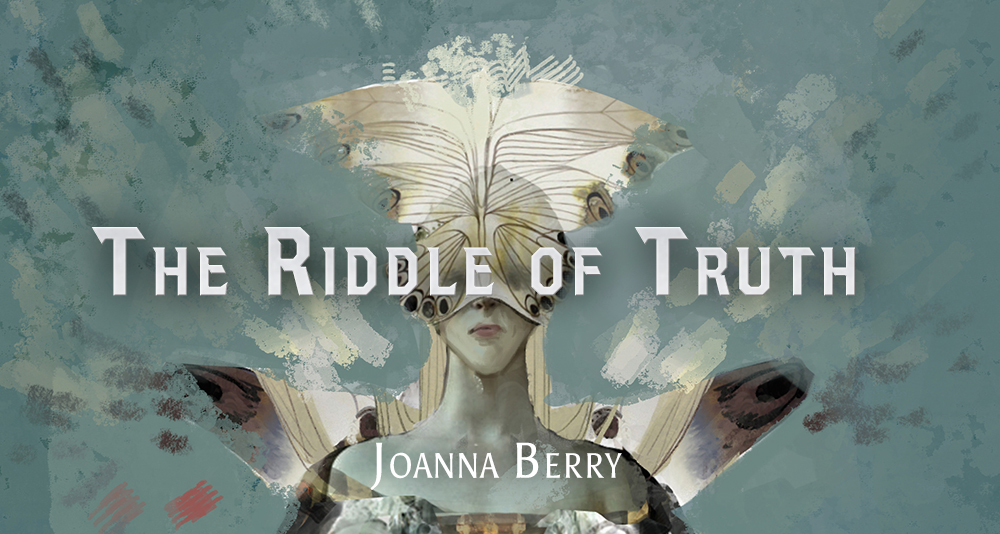 Today we’re excited to give you The Riddle of Truth, a new short story by Joanna Berry. In Paper & Steel and Paying the Ferryman, Joanna gave some insight into two of Corypheus’ agents: Samson and Calpernia. In this story, we learn how the Great Game is played in the Orlesian Court.

Indulge me. It’s a late spring day in Val Royeaux, warm enough to enjoy the blushing cherry trees in the mansion’s gardens as we sip chilled wine under a parasol. The bells and sweet chorus of the city chantries make an enchanting backdrop to our conversation. We speak of everything: from the intricate machinations of the Imperial Court, to the fashions of our rivals, to what to make of the latest insolences from Ferelden.

You are charming as ever, and so witty, I can’t resist beginning a little game of riddles. “Here: how can a man’s reputation be broken by a rose?”

“What a delightfully shameful question,” you say. “No doubt it’s a metaphor for some blushing virgin.”

The white rose buds upon the branch

As demure as the Maker’s bride

While the dog-rose in the summer bloom

To the ever-shifting willow tree they clasp

Bending its branches beneath their grasp.

“That verse was shared at every poetry reading in salons last summer,” I add. “It ended the career of Baron de Fossent quite decisively.”

“Not at all,” I explain, sipping my wine. “The Baron de Fossent has long been a trading partner of the Daniau family, whose livery is, of course, the white rose. The Daniaus are powerful and rather over-sensitive. The willow represents the Baron himself, after those three willow trees outside his ancestral manor.”

“Why,” I chuckle, “the Baron’s secret connections to merchants in Ferelden—dogs, you see!—and rumors of a Fereldan mistress with unseemly influence over the Baron. Enough to offend the patriotism of such a noble line as the Daniaus; they disowned him quite decisively. That little verse, repeated so often, helped them realize that their partner had become a liability.”

“Such a scandal,” you say in wonderment.

“Quite! But when Baron de Fossent left Val Royeaux in disgrace, his connections sought another patron, and… well, one couldn’t let such an opportunity pass. I fared rather well, if you’ll excuse a moment’s vulgarity about money.”

To that I might add: “It’s the Great Game, after all. Where there are losers, doesn’t it follow that there must also be winners?”

I smile. “With your appetite whetted, what do you make of this riddle?”

Near candles I crawl:

I die in the darkness,

But mark the hour where I fall.

You, my dear companion, seize on the answer at once. “After one has seen the sundial in the rose garden at noon, it can be nothing but a shadow.”

I chuckle at your cleverness. “Maker, undone by my own gardens! They are so very dear to me, as you know.”

My smile might become wistful. “I walked these lawns often, listening and philosophizing, while my dear brother was training as a chevalier. He shone so brightly, it took time for him to see how useful it is to be forgotten—a shadow.”

I perk up. “Now, light and shadow—that reminds me of another poem:”

A hunting hawk is wild and wise

Straight as the arrow’s path she flies.

While the kingfisher plucks from glint and gleam

Reaping the bounty of the stream.

“Why, yes,” I answer, topping up your glass. “A hawk is easily seen in the bright day, straight and true. Her strike is decisive—perhaps even heroic—yet for all that, she may come up empty-handed if the mouse or rabbit flees. Meanwhile, the tiny kingfisher is an overlooked jewel, plucking morsels from a great river. Nothing is missed, and the kingfisher prospers.”

You observe: “Another side of the Great Game. How apt!”

“An excellent lesson to be sure,” I agree. “A chevalier might be as the hawk—perform mighty deeds and be showered with glory—only to find that a subtler fellow at home has nibbled away at his influence at court, with sweet gifts and sweeter promises. Tiny victories compound.” 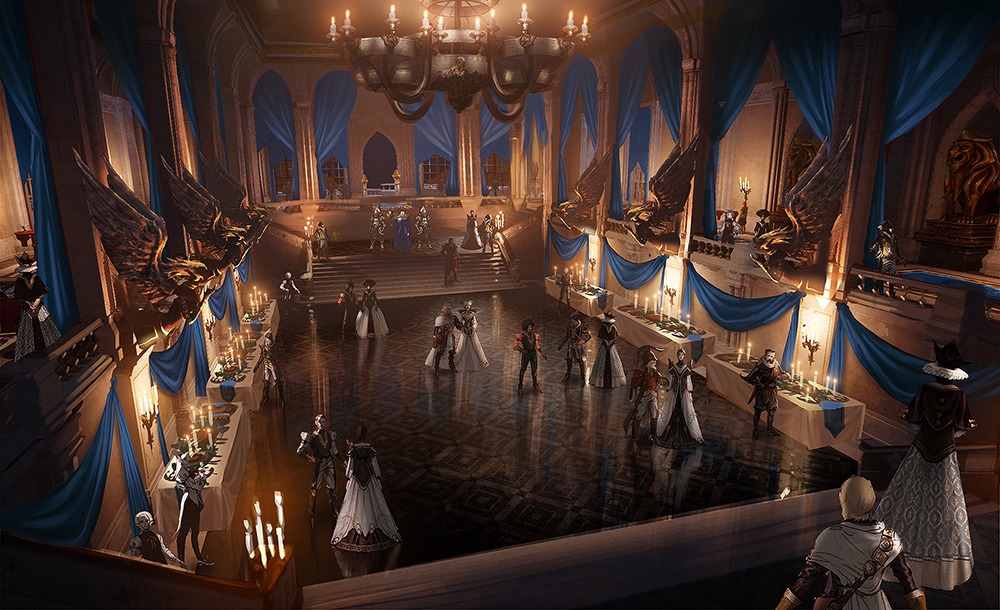 “Honor and valor are precious, surely?”

“For a chevalier, indeed,” I answer, “but the prize of our endeavors is a subtler coin. Fools speak of the Game as if it was chess or Ruff-and-Honors, when it is nothing so simple. The Game is both subject and teacher, and its greatest lesson is that an elegant victory is more than the win. True mastery is to give your opponent no choice but to concede—gracefully.”

I sip at my wine. “Sadly, elegance is not always enough. There are more straightforward ways to achieve what is needed. A spoonful of salts in a rival’s tea, to keep them from a most important rendezvous. A bard as good between the sheets as he is with the harp. Even, perhaps, the suggestion of steel…”

“No one would ever lay such deeds at your door,” you assure me. “The very idea. You of all people are above reproach!”

Because we are such very good friends, I might smile, and lean in for a confidence. “You are a paragon of virtue. But one must think of the alternative. The Great Game is for the good of Orlais. What is a moment’s crisis of conscience, if our deeds ensure the security of the nation?”

Perhaps I toy with my glass. “You heard this little trifle, surely?”

A golden beauty of ancient strain

Lovers hanging on her every refrain

And lyrium running in her veins?

“Surely not the Comtesse Sandrice?” you could inquire. “Wasn’t she—?”

“Exiled as a suspected spy for the Tevinter Imperium?” I could sigh and shake my head, but I have few regrets. “Perhaps it was a little premature to spread that rhyme suggesting it, before definitive proof had been obtained… but wasn’t she a terrible influence on the Empress, with her wild ideas on the treatment of mages? What would more proof have added, besides confirming what we all knew for a certainty: that she should never have been allowed at court in the first place?”

I smile. “Of course, I whispered in a few ears to ensure her lands were settled appropriately. I had a few recipients in mind, all much more suitable…”

Perhaps you remain unconvinced. You might say, curiously: “The Lord Meduet fled not long afterwards.”

“A most unpleasant man, whose riches were entirely undeserved. His association with Sandrice needed more spice: a hint of dalliance between his daughter and a Rivaini pirate served nicely. One of my more dashing notions, though more the stuff of a five-copper novelette.”

“Aurelie’s taste for petite absinthe was unseemly; the rumors practically wrote themselves. De Carfons was a trickier prospect. Those “parties” with his servant girls were being overlooked—I had to resort to a more robust humiliation, though I never imagined him so sensitive.” I top up my glass again. “They were dreadfully unsuitable people. Are we not better off without them?”

“But,” you could ask, “aren’t you afraid of being caught in such scandalous untruths?”

And I might answer: “Here is the best riddle of them all. What is truth?

“I have never been given a satisfactory answer; the scholars and metaphysicians at court disagree in a most entertaining way. Consider: the unshakeable loyalty of a courtier—the ‘truth’ of them, we might say—would be utterly disproven if they were revealed as a spy tomorrow, would it not? If we met in the Grand Marché, and I was cloaked and masked, could you be certain that I am the woman you know me to be? So one must ask, if the truth is so elusive, and a lie so much more useful, why choose the one over the other?”

“Truth is truth!” I can hear you saying, my dear friend—and I understand it, for you are of good conscience, and I know you so well.

“Come now,” I might say then. “Is there really no secret face that you keep turned from the world? Are there no truths you would keep hidden, like a moth fluttering in the dark? No fears—especially with mage and templar at each other’s throats—of what tomorrow might bring?”

I consider the bright spires of Val Royeaux against the powder-blue sky. “Is there not a part of you that sees the masks and fictions of the Great Game, the ever-shifting loyalties, and knows that the world beyond them is no less changeable? There is a Chantry and an empire and chevaliers and enemy nations, to be sure. But why should these things always be so? There was a time before they came to be—could that time not come again?

“What if a great wind were to blow and turn all these things upside down… or make it as if they had never been? Where, then, would this ‘truth’ of yours be found? Would you see me, then, for what I truly am?”

Perhaps a breeze is casting down blossoms from those gorgeous cherry trees.

“Why, such things you say!” you might answer, if you had listened more to my tone than my words. “Here I thought I knew you so well!”

“Oh indeed!” I would respond. “This is all a momentary fancy. Forgive me! Never fear these little tales of mine; I’d never countenance such wicked gambits being used against you.” 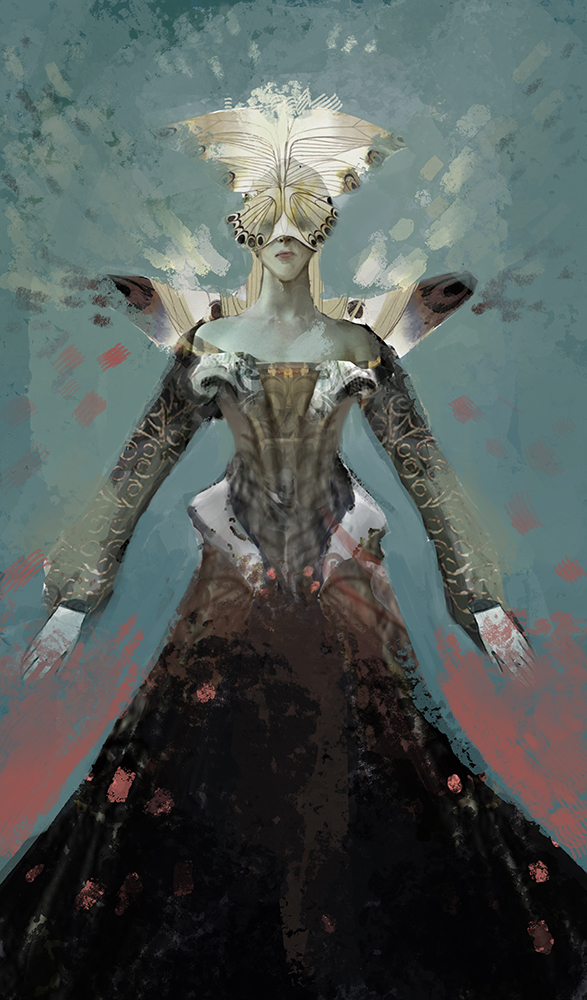