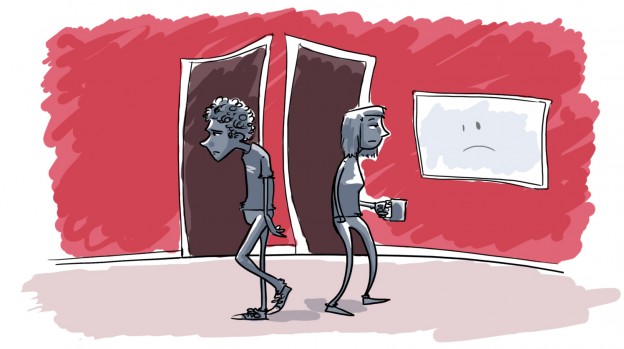 In a quiet corner of a small studio in the city of Montreal, there lived a sad wall of little importance. Neither load-bearing nor fanciful in material or design, the wall simply stood where it was put, as walls are wont to do. And though standing still is an admirable trait to have in a wall—indeed the one thing that’s expected of it—this wall dreamed of more.

It was tired of the blank, expressionless faces on the game developers walking past. It was tired of sectioning space into rooms and hallways. It was even tired of being red. And as days turned into weeks that turned into months, the wall grew more morose.

Then a funny thing happened. It seemed the sadder the wall got, the more people noticed it. They would pause in the hallway and say things like, “My word, is that ever a sad looking wall.” Others would agree, “Dreadfully sad.” Soon it was hard for anyone to even think of the dreary patch of drywall without weeping with abject sorrow.

“This damned wall is ruining our day,” they said. “Something must be done!”

Of course, you can’t just paint a wall and expect it to be happy – and hiding it behind drapes would be rather silly. After much debate, it was decided that the best way to cheer up the weepy, old wall would be to cover it with joyful things: art and letters and photographs from Mass Effect fans who want to share their love for the franchise with the studio.

And so, in a rather roundabout way, we’re asking you, the Mass Effect community, to send us things to cover our wall. Send us pictures and postcards and paintings. Send us weavings and writings and watercolors. We’ve got a wall to fill, and we want what you make.

To partake, send your Mass Effect creations along with a signed release to:

You can also submit print quality work to fanart@bioware.com

*All fan art must be your own original work, and cannot contain any images from third parties. For photographs, please include a signed release form for all parties involved.