Within the Dales, the Exalted Plains is a massive stretch of land ravaged by civil war and ripe for exploration in Dragon Age: Inquisition. Each distinct area of the Exalted Plains has its own complex ecosystem, creating the Plains’ physical space in the game was no easy task. 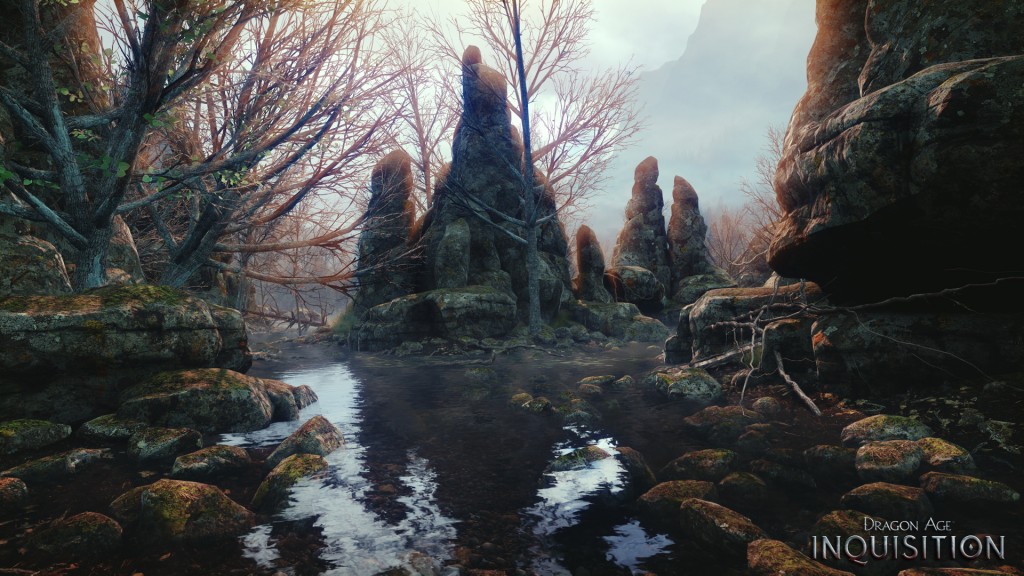 “The first thing we [did] was try to portray the civil war and the impact it’s having on the environment and the people of that region,” says senior environment artist Andrew Farrell. “In these spaces, we try to provide opportunities for the Inquisition to come in and make its mark on the area. Then the people there rally around that.”

The Inquisition arrives at the Exalted Plains during a ceasefire between two armies at war. The bodies of fallen soldiers mysteriously rose from the dead and have driven the armies back to their respective castles in retreat.

As this is the Dales, one might wonder: what’s become of the Dalish elves?

“They’ve retreated into an area with more security away from all the fighting,” explains Farrell. “Of course, they’ve got a few problems of their own.”

The Crow Fens is one section of the Exalted Plains. In contrast to the sprawling hills elsewhere in the area, the Fens is claustrophobic, creating tension as you wonder what lies in wait for you around the next corner.  According to Farrell, the Fens was the perfect playground for his imagination to run wild. 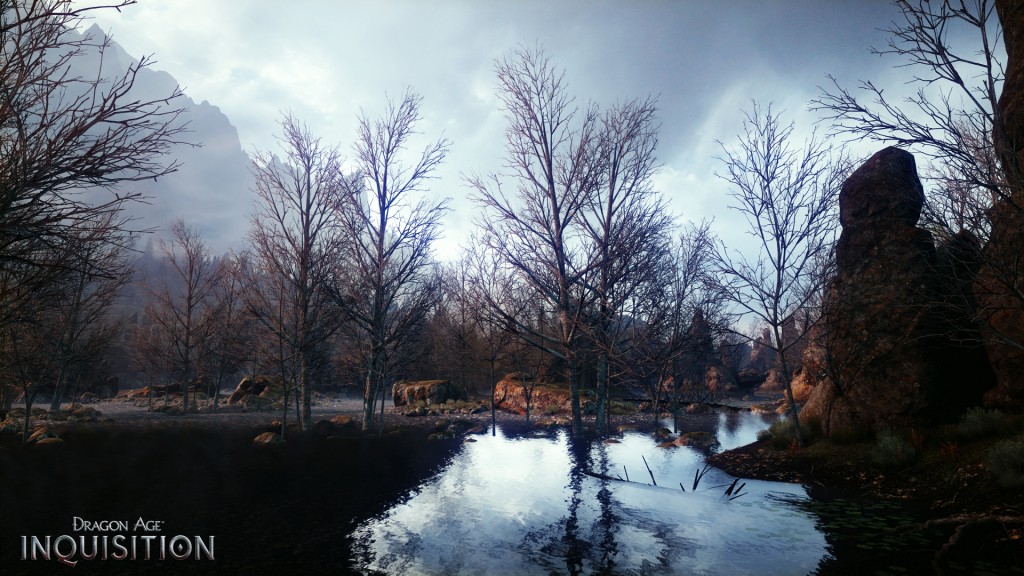 Using the power of the Frostbite 3 game engine and next-generation technology, utilizing water in levels is one of the achievements the team is most proud of.

“Interactive water is one of the key things we’ve added to next-gen,” says lead environment artist Ben McGrath. “It’s got realistic reflections, and also realistically ripples and splashes as you walk through it.”

This is all made possible by a technology advancement known as “displacement mapping”. McGrath describes the benefits it adds to the game:

“Displacement mapping adds a new level of realism to the environment. Normal maps [in previous-gen technology] brought great detail to surfaces, but displacement mapping actually pushes those details out so you can see them in the silhouette. The place where it’s probably the most noticeable is on terrain. Pebbles, sand ripples, cobblestones, and other details all pop out from the terrain and make it far more detailed than ever before.”

Once an area is built, its ecosystem brings it to life. While exploring the Exalted Plains, you’re likely to see the halla, birds, and wolves that have made it home. Make your way into the Crow Fens, and you’ll find yourself amidst drakes, dragonlings, and dragonkin.

Don’t let the looming threat of danger deter you from adventuring, however.

“Get off the beaten path!” says Farrell. “Just like exploring in real life, look under all the rocks, under all the bridges, and in all dark corners of the map. Take the path less-traveled and you might something interesting… or surprising.”

As expansive as the Exalted Plains is, Farrell and McGrath agree that you shouldn’t worry too much about missing anything, because you can return to it at any time.

“You won’t be locked out of an area,” Farrell says. “We’ve got a lot of space, so you definitely don’t need to try and see everything on your first playthrough.”