BioWare knows that we have some very creative and talented fans out there. Whether you are a cosplayer, an artist, a baker or something similar, we know that our games have helped spur your imaginations and skills.

We want to help recognize you and your creativity here on the BioWare Blog by letting you blog about your creative outlets and your enjoyment of our games. If you are interested in blogging about your art, cosplay, creations or similar, please let us know by emailing Community@BioWare.com We hope to hear from you.

In a small farming town in northern Louisiana, I terrorize the plains, scurrying through the tall grass in search of any miniature thresher maw predecessors and waiting for the chance to survey uncharted worlds. I may lack micro-thrusters and an element zero core, but my pilot will find ways around this. I am the RC Mako. (https://www.facebook.com/RCMako) 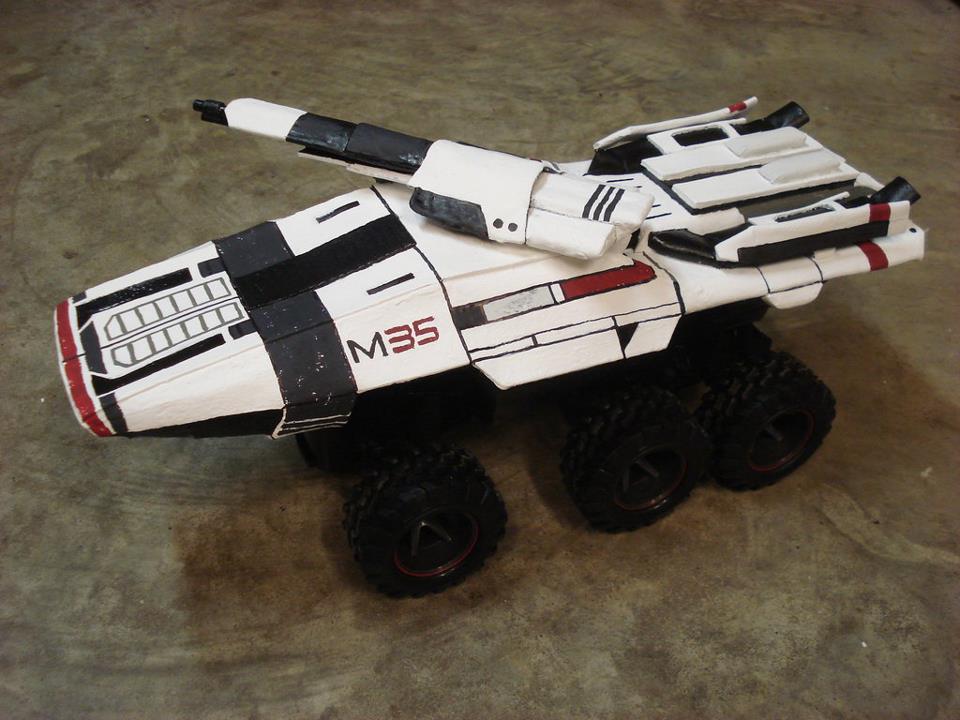 Hey, everyone! My name is Laura Ducros, and I made a remote-controlled version of the M-35 Mako from the original Mass Effect. I consider myself a jack of all trades, being primarily an artisan crafter and cosplayer. I’m a huge Mass Effect fan. I have cosplayed as FemShep and made a few weapons from the game—including a Nerf Recon transformed into an M-920 Cain. I’ve even carved Mass Effect designs into a few pumpkins. My creations are all on my Facebook page: Rebel Among The Stars Studios (https://www.facebook.com/RebelAmongTheStars) or on my DeviantART (http://xrebel66x.deviantart.com/).

The idea for the remote-controlled Mako started after I attended DragonCon 2012. I have been to conventions across the US, including SDCC, but nothing prepared me for DragonCon. It was my first time attending, and I expected just another run-of-the-mill convention. I quickly discovered how wrong I was. The variety of unique costumes and the dedication I saw to people’s crafts put all of my past conventions to shame. Even though I was only able to spend one day there, it left a real impression on me. All I could think about was returning next year and bringing along something that would add to its vast geeky diversity. I spent the entire eight-hour trip home brainstorming. My mind was filled with ideas, but one stood out: an RC Mako. 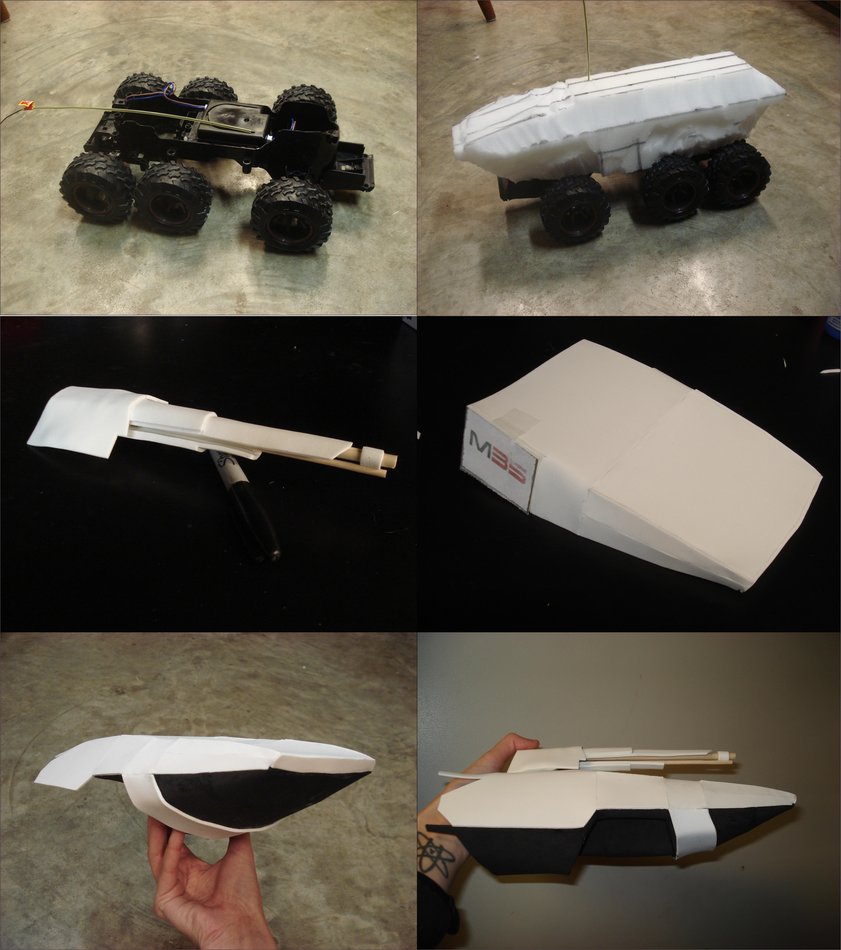 I remember thinking, “I see at least one R2-D2 or K-9 being operated at these conventions. Maybe I can do something that is remote controlled, too.” I immediately knew I wanted something from Mass Effect, since the games are very dear to my heart. This also meant I could bring my creation along with me whenever I was dressed in my FemShep attire. The first vehicle that popped into my head was the Mako. Even though some people hated it, I absolutely adored it. I consider myself to be pretty darn good at maneuvering that monster around. Exploring uncharted worlds, shooting at thresher maws, driving over geth armatures and watching them wobble back upright…all the good memories I had with the Mako sealed the deal.

I had a general idea of how I wanted to execute it—something similar to the one an avatar on XBOX 360™ could have, but with my own flair added. I began scouting for ways to make this dream a reality. The first obstacle was the base. I contemplated building something entirely from scratch, but I lacked the funds and resources. I searched, and stumbled across a 6-wheeled truck in the toy department of my local Target™ that had a base identical to the Mako’s. It was exactly what I needed to start this journey. 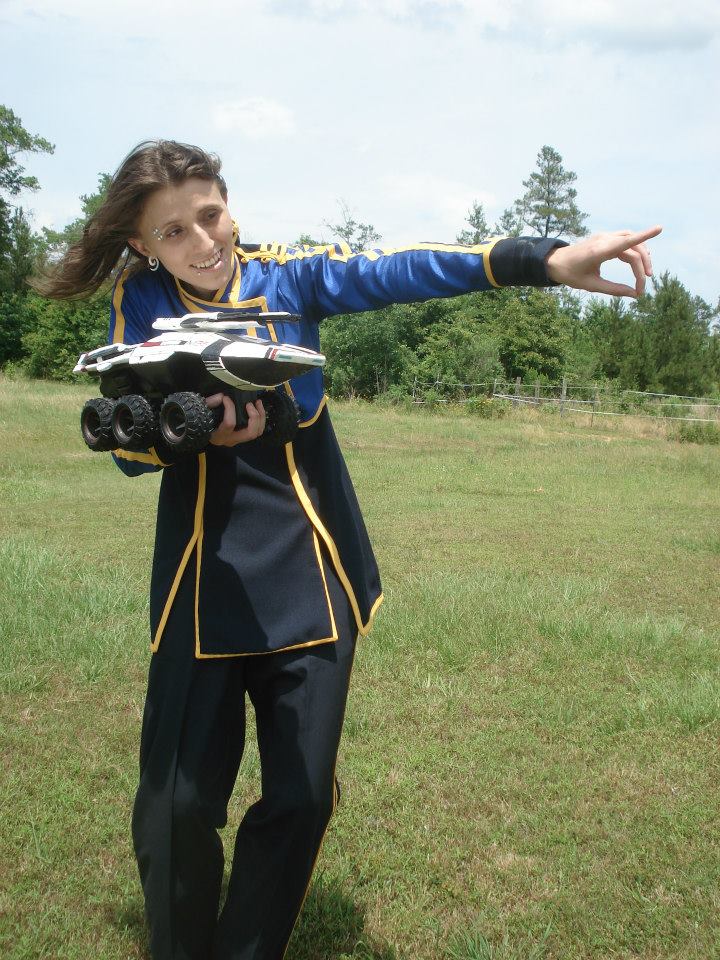 As soon as I brought that base home, the Mako became my main project. Even when I wasn’t physically working on it, I was constantly thinking about it. It consumed six months of my life. There was a lot of trial and error—and countless messages sent to friends asking for advice or suggestions. I’d never tackled anything like this before, and it was a fairly challenging project, but I was determined to make it happen. It took me four attempts before finally getting the body perfect. (I nicknamed it “Bruce.”) I still keep the failed attempts as keepsakes to remind me of how I didn’t give up.

The end result was a body made entirely of craft foam, one dowel, and a few bottles of superglue. I used a papercraft model created by ThunderChildFTC (http://thunderchildftc.deviantart.com/) as a base for the final design. I enlarged the original model, made modifications to the design, cut out the new pieces in the foam, and winged it the rest of the way. Measuring 19.5″ long, 8″ tall, and 7.5″ wide, he’s no shabby little RC. The most difficult part was getting the cannon to turn on command, especially since I had absolutely no idea what I was doing. When I finally managed to get it working, my squeal was loud enough to startle my dogs. After 6 months, the finishing line was finally in sight. I couldn’t sleep during those final days.

I didn’t know what kind of reaction to expect. There are a great many professional remote controlled toys and props out there, and I was just an amateur with a big dream. My main goal was already accomplished, and that was rewarding in itself. But the positive response my Mako got makes me want to blush. I honestly never imagined it would be so well-received. Pictures appeared on Kotaku only a few hours after I posted them on DeviantART. The wonderful people at BioWare shared the video I created on Twitter and Facebook. I’ve even inspired others to make their own RC vehicles from Mass Effect, like Ammnra’s Kodiak (http://fav.me/d5vojhe – https://www.facebook.com/AmmnraCreations). 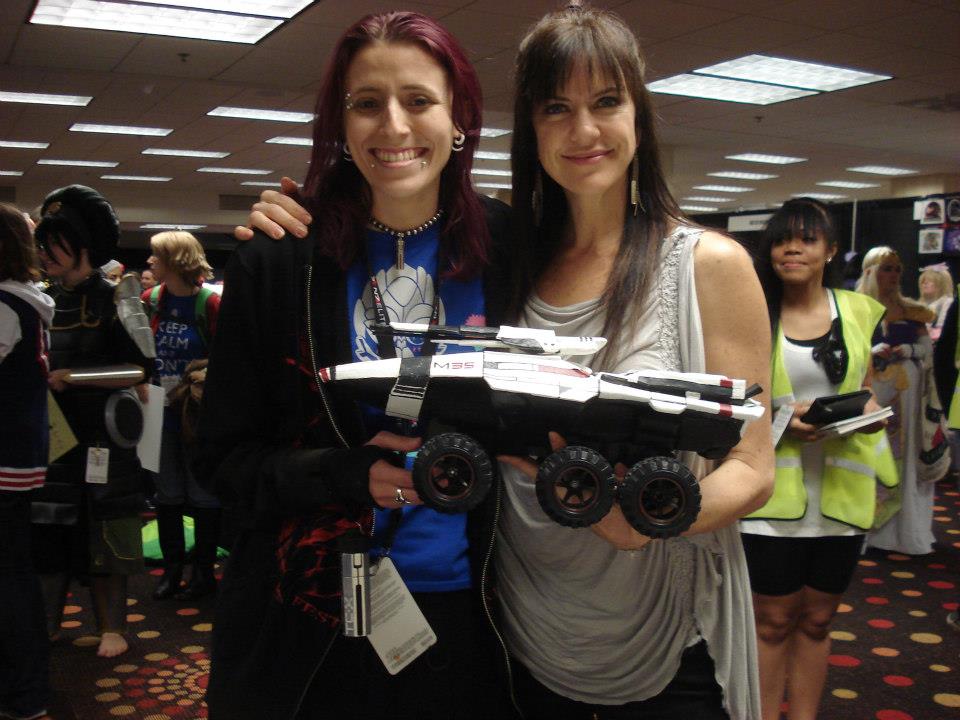 People immediately recognized my Mako when he made his first public appearance at MomoCon 2013. Many came up and expressed their strong love or hate—some even joked that he handled better than the in game version (which he doesn’t). I loved driving him around and hearing people call out, “It’s the Mako!” But nothing could compare to the reactions I received from Chris Priestly, Keith Hayward, and Mark Meer when they took him for a test drive. It was truly overwhelming.

So what lies ahead for the RC Mako? I plan to take him to every convention I attend. I’m really looking forward to bringing him to SDCC and DragonCon. I’ll be driving him around during the parade while I’m marching with my fellow N7 Elite’s (https://www.facebook.com/groups/N7Elite/). I see myself continuously upgrading and improving my Mako for many years to come: I already have a very long list of things I want to add, including lights, a functioning cannon, and eventually having him jump around like he’s on thrusters. This whole process is still very new to me, so the more I learn, the more I can implement. One day, he’ll be crawling up 89-degree cliffs—and then I become an official member of the Mako Mountain Climbing Team.

Thank you so much for taking the time to read my story.

Rebel Among The Stars – https://www.facebook.com/RebelAmongTheStars