We sit down with BioWare development director Robin Mayne to talk about life at BioWare, how to get involved with the game industry, and more! 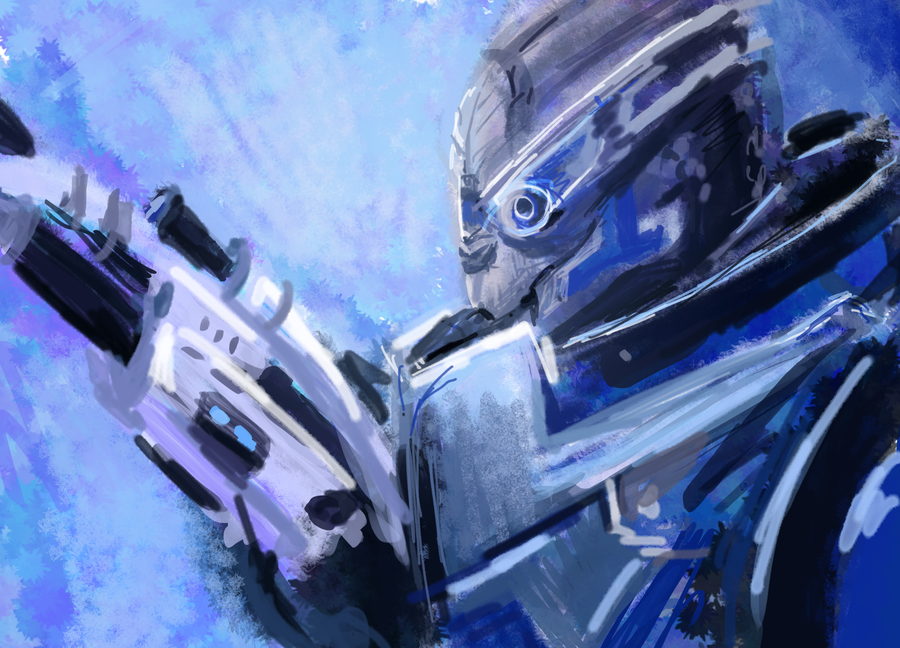 Who are you and what is your role at BioWare?
Hey everyone! Robin Mayne here. First off, thanks to Jessica and the community team for the chance to do this Q&A (and for just rocking in general, srsly). Hopefully I can share some interesting stuff with you all about making games, which can be an exciting and challenging proposition for sure.

My latest role at BioWare has been on the Mass Effect team, working with the many talented folks who bring the ME universe and storyline to life: the content creators on the Story and Level teams. There is a small (and gifted) army that includes level designers like Raylene Deck, writers such as Sylvia Feketekuty, cinematic animators, level artists, and cinematic designers. These are the folks I work with most directly, though of course there are many, many more disciplines that collaborate on a game like Mass Effect.

I am a Development Director on the franchise… this means my role is to help organize and facilitate these teams so that they can make the best game possible for you, the fans. The teams on games such as Mass Effect 3 are large (often hundreds of people), with many moving and interconnected parts. Bringing ideas to life in such an environment involves coordination with many people. I help to make sense of it all, so that the game comes into existence as smoothly and efficiently as possible, and providing insight that allows us as a team to make intelligent decisions about the best way to build the game. Quality is a huge focus at BioWare, so the processes we use to build our games have to be centered around adding value to the team in ways that increase the quality of the player experience. Iteration is one tool we use a lot in our development cycles. I have had the fortune of seeing every corner of the Mass Effect universe evolve and improve on a daily basis for the last several years. Quite a ride.

I initially started at BioWare about 11 years ago as a web developer, then managing our web and community teams. I worked with a very talented team here who brought forth all the web and community sites for BioWare, including Neverwinter Nights, Kotor, Jade Empire, and the initial sites for Dragon Age and Mass Effect. Releasing and scheduling new community content on Neverwinter Wednesdays (which later became BioWare Wednesdays) was a core part of my job for about 5 years or so. It is neat to think so far back in time regarding our community, to the days before facebook and twitter. Good memories, for sure. That said, I am a *big* fan of where our web and community teams have taken things since.

What is the best part about your job?
Working with passionate, creative people, and seeing amazing game worlds come together. I am a big fan of the games we create.

What does an average day look like for you?
Lots of talking with people, getting things organized, and reacting to new information.

Often each day starts with a bunch of group chats, as each team gets together to discuss what was done the previous day, what the plan of attack is for today, and what’s getting in the way of making the game. There is usually a follow-up meeting where reps from each team coordinate on all the items and issues each team brought up. The bulk of the day will then proceed, carrying out all the activities needed to support what was planned first thing in the morning, and following up on the issues reported.

To give you some examples, maybe there are a couple of levels that are ready for some team feedback today. This could be because the latest art pass has been completed, making the level look that much better, or the VO for a character has now been recorded and added to the game, allowing the team to better evaluate the acting animations and camera angles for a dialogue scene. Maybe we need to setup a playtest with a group of team members because a new layout for a multiplayer map is ready, and we want to see how the new cover placement impacts the flow of the map (this is always an enjoyable part of the day).

As we go through the process of taking each section of the game from an idea to a completed area, there is a continued cycle of reviewing the content as a team, and discussing how it could be made better for the player. Those ideas will then get prioritized, implemented, and then it is back for another cycle of review. Part of my job is sorting out and tracking where each bit of the game is at in terms of the overall process, so that we can ensure all of it is moving forward as needed, and when it isn’t, calling attention to it so that we can find the best way to deal with the situation and make sure we are creating the best game we can for players.

Can you tell us about one of your proudest moments working in game development?
By far it is witnessing the fan reaction when your game launches. Games are hard to make, and can take a long time. Knowing that what you and your fellow team members have created is now ‘out in the wild’ for all to see (and hopefully enjoy) is an amazing feeling. Seeing fans with tattoos of your game is also pretty damn cool (I have even seen kids named after our characters).

What’s a geeky thing about you?
See the last question in this interview, heh. I also love astronomy. Jupiter is amazing, even in regular binoculars, and is often the first and brightest thing you see in the sky each night (second brightest if Venus is around, as it is now).

Do you have any advice for those wishing to get into the video game industry?
There are three avenues I can think of that are worth looking into: 1) get involved with a modding community. 2) familiarize yourself with the games industry at places like gamasutra.com (or better yet, go to a GDC if you can). 3) Check out the job listings at as many companies as you can (such as http://www.bioware.com/careers ) and look for patterns in what skills are sought after. Find creative ways to obtain those skills.

If you weren’t working in the industry, what would you be doing?
Brum brum brum. Riding my motorbike full time, of course! We actually have a bit of a biker gang at BioWare (with flaming ‘BioWarrior’ biker patches and everything).

What are you currently playing, reading, or listening to?
I am reading the fifth book in the Game of Thrones series, A Dance with Dragons, which is doubly awesome since the TV series is also on atm (Joffrey is such a little *@!) . Game of Thrones is up there on my all time list, probably falling just short of Dune. George R.R. Martin and Frank Herbert have a special place on my bookshelf.

As for gaming… I have a bit of ‘shiny object syndrome’, so I tend to have a lot on the go. For video games, I really enjoy playing both ME3 multiplayer and SWTOR with my brother, and am also playing Grimrock and League of Legends as well (Ryze ftw!). We have a very active Warhammer/Warmachine miniature wargaming group at work, and I field a couple of different armies when we get to throw down. I have also been on a bit of a boardgame kick lately, playing a lot of Defenders of the Realm, Dominion, Thunderstone Advance, and Puerto Rico. Arkham Horror and the Mage Knight boardgame are also in the mix, and are probably my two favorites overall.