There’s been a few questions about the Dragon Age presentation at PAX East this past weekend, specifically with regards to the plan for follower equipment. Hit the jump for all the details!

There’s been a few questions about the Dragon Age presentation at PAX East this past weekend (which you can watch here, if you like), specifically with regards to the plan for follower equipment. It might be kind of hard to see the slides in that video, so I thought a bit more detail might be called for… in addition to offering us a chance to get some feedback on this proposed system.

But first, as in Mike’s original presentation, a caveat: this is a work in progress. It shows our thinking on this particular topic, but should not be taken as a promise. The reason for that caution is there are a number of technical systems to work out before we can say this is even feasible. Still, it’s where we would like to head.

So what was Mike talking about? Let’s say you have two followers in your party, one a Grey Warden and one a Seeker. Their initial appearances are thus: 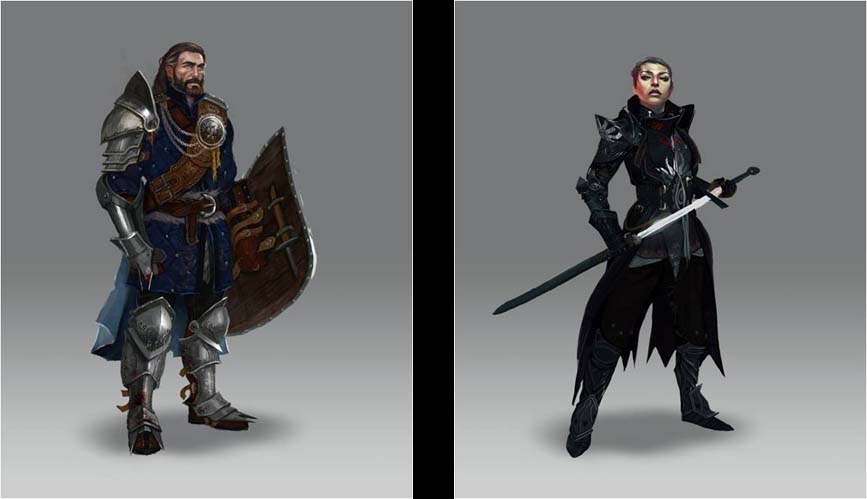 I then find a piece of plate armor, the “Sterling Breastplate”. Normal class restrictions apply, but in this case both followers are Warrior class and can wear this plate armor. I can place it in their chest slot… but now, instead of changing their entire appearance, it changes only a part. If I were to add that item to the Warden character, it might look like this:

See the difference? This piece of plate has a different result on each follower that can use it, but has a “look” that is specific to that piece of armor. So the Sterling Breastplate results in a silvery piece of chest armor on any given follower which stays silvery but doesn’t remove that follower’s visual identity. If we moved the same piece of armor to our Seeker, for instance, it would look like this: 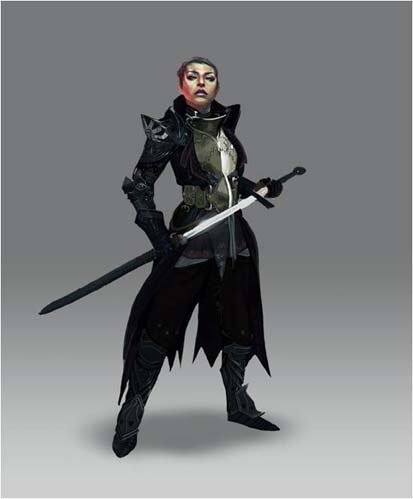 Doing armies in “pieces” like this means we can expand the variations to other portions of the armor… so gauntlets, lower body, or shoulders. Like so: 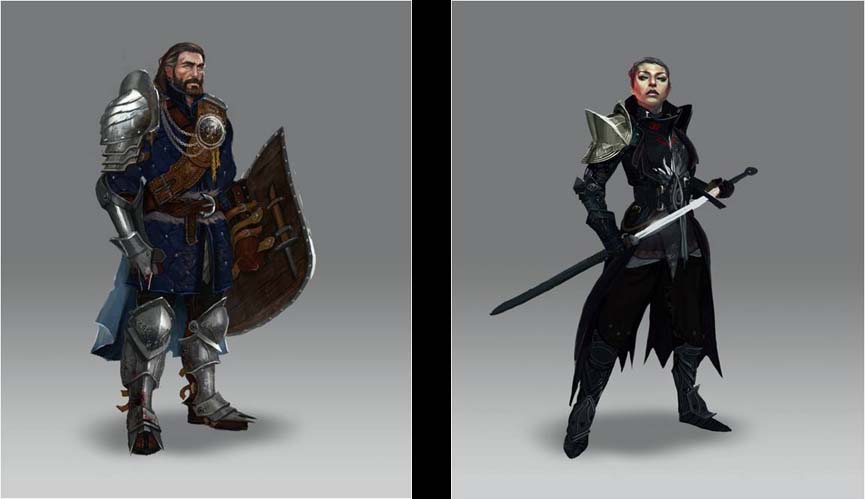 With the armors in pieces, that means you can assemble them into a “look” that would have many variations… yet would still be individual to the follower. Take the example below: the complete “Sterling” armor, and yet it looks very different on the Grey Warden as opposed to the Seeker… but not so different as to be unidentifiable as that armor type. 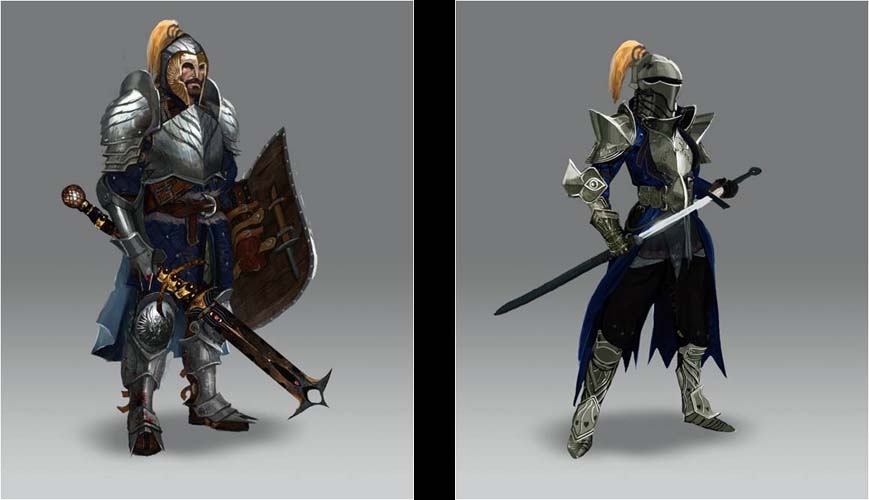 You can see some of the effects we can produce with the combinations. Below is an example of another “look” that is possible, again slightly different on the Grey Warden as opposed to the Seeker: 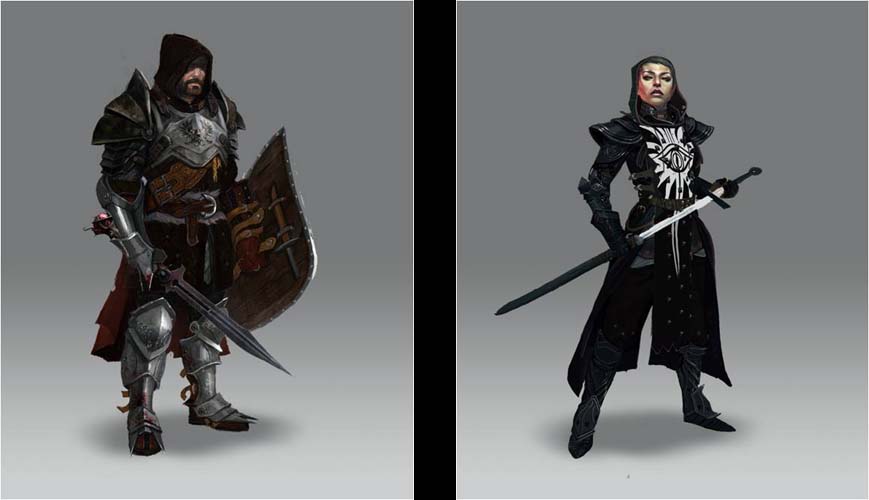 Another couple of examples below (though these are unlikely to be from the same “set”), showing the different sort of looks we could achieve with the same characters: 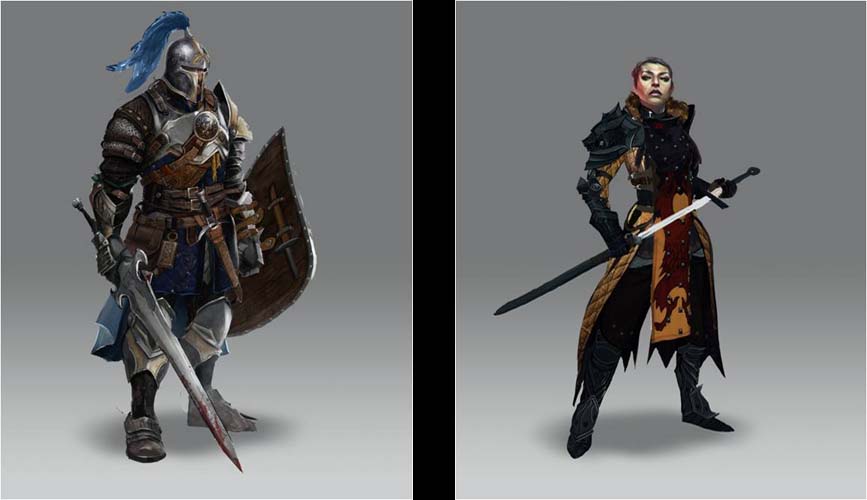 We have more opportunities for variation when it comes to the color and material type of these individual pieces. Perhaps this is something we’ll even be able to offer to the player (in terms of customizing their own armor to their tastes), but whether that happens or not it’s still something we can set ourselves. Between the “look” of a particular armor piece, the color and the material we suddenly have a huge number of appearances possible for a given character… way more than we could achieve solely by replacing the character’s entire body model.

I’m sure this all brings a few questions to mind:

What’s wrong with the inventory system used in Dragon Age: Origins? Why not just use that?

There’s nothing wrong with that system per se. It was, however, a lot of resources that led to end results which weren’t ideal… namely that we had less appearances overall in addition to very little visual identity for the followers. Morrigan was the only character in Origins who had a unique appearance, and one which was immediately lost the moment you put different armor on her. Other followers had little visual identity at all outside of their faces, and ended up looking like every other character who wore that armor. Again, that’s not terrible in and of itself (characters are defined by more than just their appearance, after all)—but we’d like to do better.

Did you do it “better” in DA2? If that was so great, why not just do it again?

We did like the visual direction for follower appearances in Dragon Age 2—but resource limitations meant that we couldn’t do the number of variations on those appearances as we would have liked. So you couldn’t change their armor at all, and that had a negative impact on player agency… as in the agency one feels by having control over their gameplay. It also meant you found a lot of armor that you simply couldn’t use at all, while this proposed system eliminates that problem. So, ultimately, it was good on one side and very bad on the other.

On a per-follower basis, there’s a certain investment in that we’d need to determine what the various pieces look like for that character. So, yes, it’s expensive in that sense. However, by breaking these looks down into “pieces” and having each piece systemically changeable in terms of its color and material we end up with way more variations overall. So it’s an investment that pays off in terms of both agency (you place equipment on a character and see a resulting change) and character identity. This is a good investment, in our books.

Why are you telling us this?

We’ve read the feedback on DA2, the bad as well as the good, and as we slowly move forward we intend to explain our intentions in more detail. This system is an example of something we’d like to change, and we’re showing it at a stage where we could still get feedback that would matter. If someone wishes to offer their thoughts about the system, or has questions regarding it, we’d be pleased to hear it.

Why aren’t you telling us about [insert other topic here]?

As Mark stated in his initial thread about discontinuing the production of new content for DAII, we’re committing to show-not-tell whenever possible. We’re certainly aware that people have questions about combat, follower interaction and more, but until we can actually demonstrate our direction we want to keep quiet about it.

Lead Writer of BioWare's Dragon Age series (and novels). It's a decent gig, and life is good. And, yes, I love bittersweet endings the bestest. www.twitter.com/davidgaider View all posts by David Gaider