Part 1 of 1, by Sheryl Chee and Mary Kirby

Q: Hi there. Thanks for giving this interview.

Sten: Am I to understand that an “interview” is an occasion set aside for the sole purpose of asking questions?

Sten: If this turns into another discussion of cat-girls, I’m leaving.

Q: Why don’t you introduce yourselves? For the benefit of the people who haven’t kept up with the website?

Wynne: I am Wynne, a mage of the Circle of Magi.

Sten: I am Sten of the Beresaad. 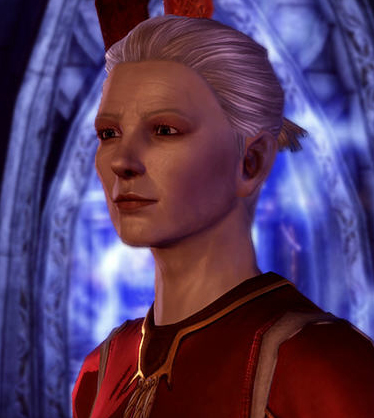 Wynne: You should use a coaster.

Wynne: A coaster. For your drink. It’s sweating and leaving water rings on the table.

Sten: Do what she says. She’s a mage. She’s liable to snap and kill us all if you annoy her.

Wynne: Sten, you annoy me frequently, and I haven’t killed you yet.

Q: Let’s move on. Now, Sten, what do you say to the allegations that you are a big softie?

Sten: That I have sound culinary judgment.

Q: Does it bother you that your love of cookies seems to be the only thing that interests people?

Sten: There’s little point in being bothered by it. Humans are silly creatures, easily amused by shiny things and quickly moving objects. You might as well ask if it bothers me that dwarves are short.

Q: What makes you an interesting person then?

Sten: To humans? I suppose the fact that I make sudden movements and loud noises helps.

Q: Are you reading anything right now?

Sten: In Pursuit of Knowledge: The Travels of a Chantry Scholar by Brother Genitivi. It’s good if you have an uneven table leg to stabilize.

Wynne: Oh, I haven’t read that one yet. His Tales of the Destruction of Thedas wasn’t bad, though.

Sten: Butter brickle. Feel free to obsess over that, too.

Sten: I thought that was a flower?

Wynne: It is. And it makes a lovely ice-cream.

Q: Wynne, tell us about yourself. What was your childhood like?

Tower Guard: I was dirty a lot—

Sten: What a surprise.

Wynne: Though there was that one man… we discovered that he actually had a peg leg under his armor. It was fun trying to throw him off-balance.

Q: So, about your magical bosom—

Wynne: Maker. Not this again.

Q: Is it really magical? Inquiring minds want to know.

Wynne: And by “inquiring minds” do you mean Zevran? Did he put you up to this? Oh, we are going to have some words, Zevran and I.

Wynne: No. Words like… “I am” and “going to string you up” and perhaps “by your ears”. Next question.

Q: But we’re not done talking about your—

Q: Um… what would you say to the people on the forums who dismiss you as “one-dimensional”?

Wynne: (sighs) What does one say to that? I suppose I could be facetious and point out my “magical bosom”, which is anything but “one-dimensional”.

Q: What are you reading right now?

Wynne: From the Shower to the Battlefield: A History of Bards. Fascinating read, especially the chapter on Orlesian bathroom construction. 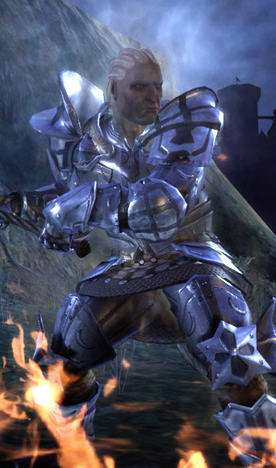 Tower Guard: I can write my name! Want to see?

Sten: The Fereldan people continue to astonish with their accomplishments.

Q: This one’s for everyone: Would you rather be a small fish in a big pond, or a big fish in a small pond?

Sten: I would rather not be a fish.

Tower Guard: I fell into a pond once…

Sten: Did the experience rob you of the ability to answer questions with something relevant?

Q: Okay, so Jane Austen and Beatrix Potter are fighting to the death. Who do you think will win?

Wynne: I don’t approve of blood sport. In the dwarven lands they have the Provings. The fights are often to the death. It’s rather barbaric, really. Am I to conclude, from your question, that you have a something similar in your culture?

Q: It involves men with large beards and sticks fighting over a cup.

Wynne: Ah, I see. It sounds very dwarven, doesn’t it?

Q: That was fun, but we’re almost out of time.

Tower Guard: Oy! What about me? I paid three sovereigns for this interview. They said if I got my name out there, I could maybe get promoted to Castle Guard, or… or something!

Sten: Are you even in this game? I don’t remember you.

Wynne: Oh, he is, but he doesn’t make it out of the Prelude, poor thing.

Wynne: It’s best if you don’t dwell on it.

Q: Before we go, is there anything you want to say to the fans?

Sten: Are we done yet?

Wynne: “Get off my lawn!” (whispers) I’ve always wanted to say that.

Sheryl Chee is a professional Minion of David Gaider, and came to BioWare from a faraway land, packed in a small styrofoam crate marked “Perishable”. She has a philosophy degree, which trained her for a career of making things up. In her spare time, Sheryl enjoys killing zombies, and knitting. She is often mistaken for a random number generator.

Mary Kirby possesses a degree in Creative Writing and the nigh-superhuman ability to make a turkey sandwich on sourdough in under thirty seconds. She came to Bioware hoping to get one of those awesome steel travel mugs. After working as a writer and professional Minion of David Gaider on Dragon Age: Origins, she still doesn’t have a coffee mug.