In the previous post I covered a little about what we’re up to with the second Builder Event, and why it was important – in particular, calling out that collaborative development is going to greatly benefit the builder community, and is a focus of this event. In this post, I want to provide a closer look at the tutorials we covered, as well as how this related to our goal for the event. 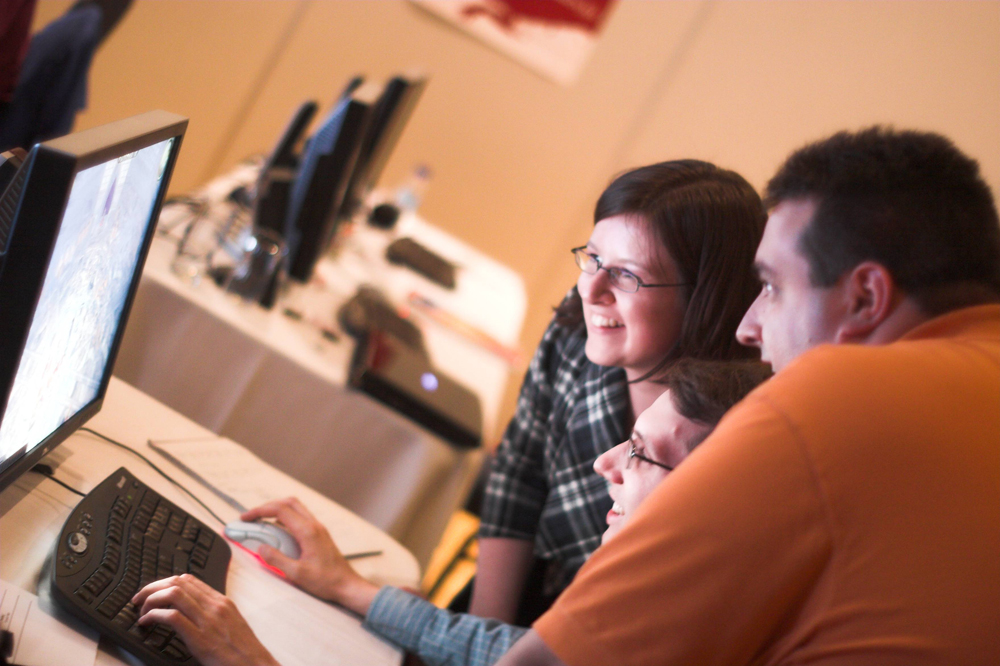 Backing up a little – once the initial intros and welcome was out of the way, the event began in earnest with lead designer Mike Laidlaw doing a demo of the high dragon fight (which you may have already heard about or seen some coverage of), and then discussing some key points and tips around creating compelling content.

The morning was then rounded off with probably the first real surprise for our builders. We unveiled the new community site currently under development, and specifically the builder area within it – this will continue to be available to the builders after the event, and very soon to DA Toolset beta members, as part of the plan for the closed beta of the site.

The purpose of this new site (in so far as it most relates to builders) is to provide a central modding resource for all things DA – there’s a whole other section specifically for players which ties into those online features I hinted at before, but we’ll cover that another time. Amongst other things, the builder area of the site has a new wiki with DA Toolset documentation and tutorials, including many of those being covered at the event.

But the more important features, and what we really wanted to throw our attending builders at, are around providing ways for builders to easily create new mod projects, find other builders by skillset, and collaborate on their mod development. To get them off on the right foot, the builders were asked to use the site to grab their first toolset content – this would provide the starting point to the day’s tutorials, and by following along they would gradually evolve this into their first module. 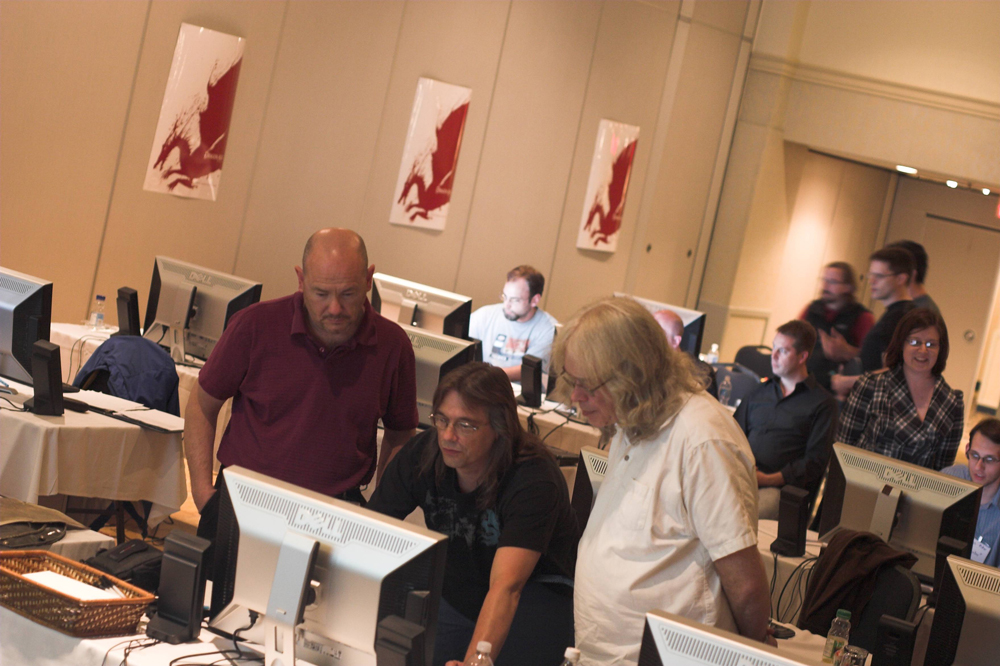 Tying this back to our event goal – we hinted to the builders a little of what was to come for day 2. The builders would be placed into small 2-3 person teams, and given a challenge: Create a working module – including dialog, combat, and area transitions, using the community site project features as their collaboration tool, and test this out in the game by end of the 3rd day. With that, we gave the builders a brief reprieve, and broke for lunch.

After lunch on day 1, the builders were provided 3 tutorials by some of our technical designers – this was equal parts crash course, refresher (for those returning) and beginning to evolve their first module. This began with David Sims providing a ‘Toolset Overview’; Joshua Stiksma building on this with ‘Setting up the story’, a tutorial on plots, scripts and conversations; and this was then rounded off by Grant Mackay with ‘Bringing the story to life’, focusing on adding combat and abilities to the module.

Day 1 closed off with a question period with these designers, and other BioWare devs on-hand. And followed by our usual feedback period – where we solicit first impressions, and suggestions from the builders. 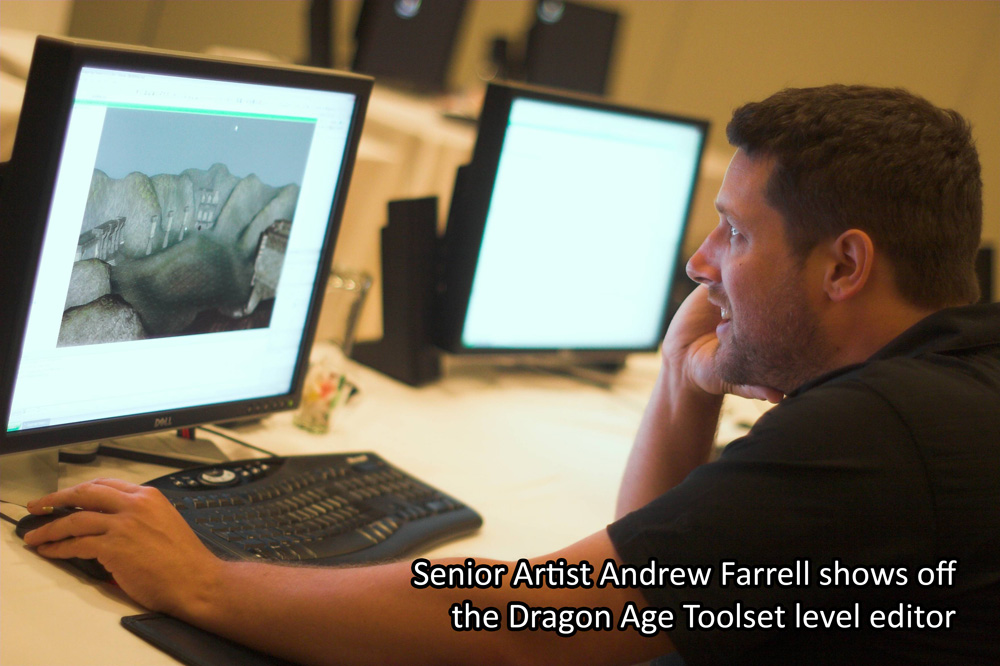 Day 2 began with Jonathan Perry, one of our cinematic designers, and the ‘Creating the drama’ session – a tutorial on cutscenes and conversations. Followed by ‘Rocks and Trees’, where level artist Andrew Farrell walked the builders through the (nearly mythical) level editor – where builders were able to create new outdoor and indoor areas from scratch for use in their module.
After the lunch break, Scott Meadows presented the ‘Builder to Builder’ feature of the DA Toolset – allowing builders to export an easy to share packaged file for use by other builders, and how to bring those into their toolset.

With all the essential pieces now in place the builders were presented their challenge. For the remaining day and a half they now had their groups and began working on a new module collaboratively, with the intent to show this up and running in the game before the event finished on the 3rd day.

Spread out over this remaining time, smaller side sessions were set up. Other BioWare devs popped in to dive deeper into specific areas of the toolset for 15 minutes or so at a time, and builders were able to take a break from their module to gather around if that topic interested them, or they were free to continue working on their module.

Sessions included David Gaider, lead writer on DA:O on writing and story-telling; Jason Hill, technical designer went into more detail on 2DAs (the exposed data files that drive a lot of the game’s systems, in conjunction with scripting); Alim Chaarani, lead visual effects artist covered the vfx editor; Matt Besler, audio designer covered how to get audio into the module; and lastly Clove Roy and Julio Alas, DA’s animation lead and senior animator respectively walked the builders through the animation composer – the editor allowing them to preview, edit and blend animations in the game. 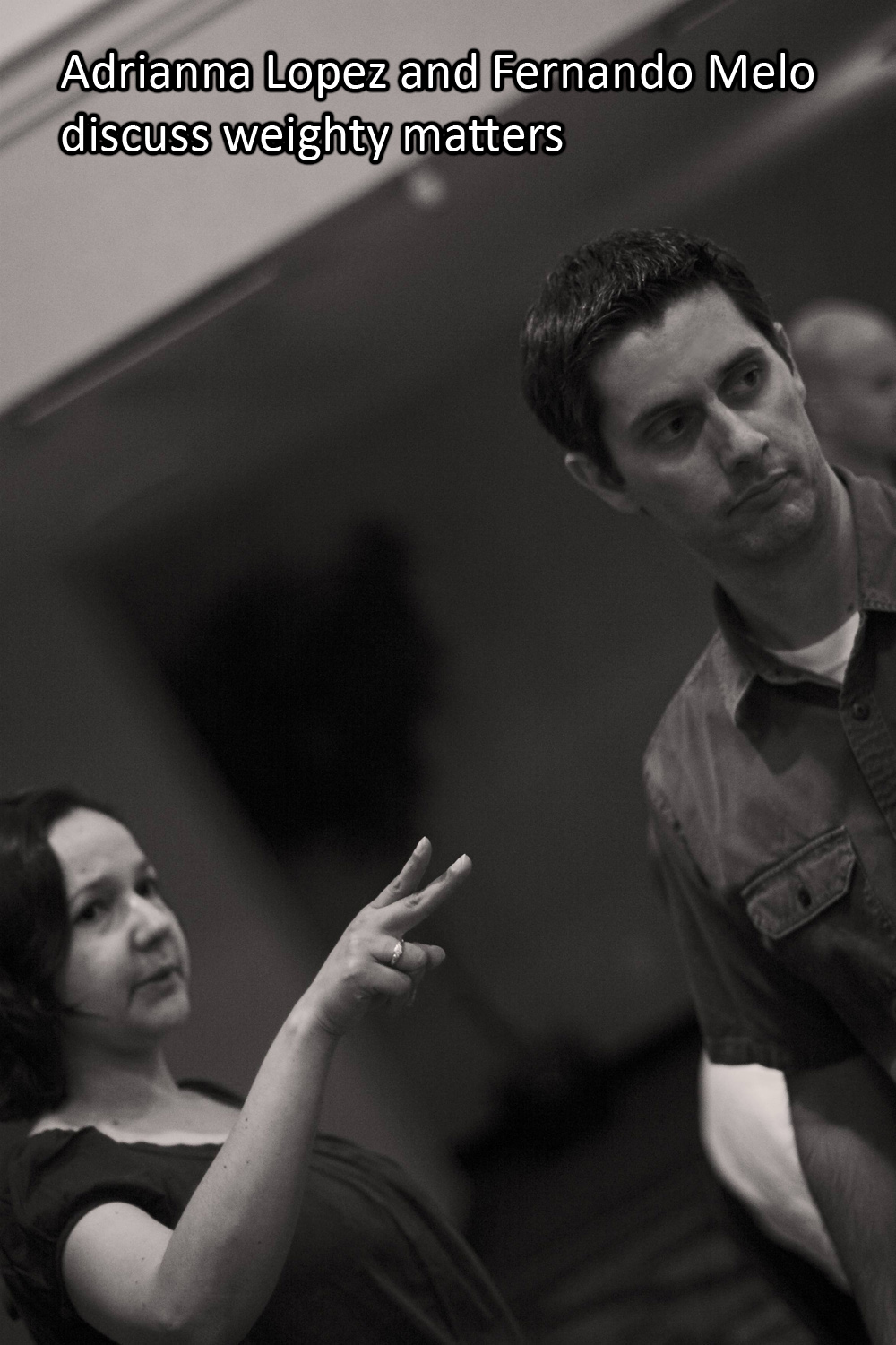 Notably, the community’s own Tim “Beerfish” MacDonald gave a session on the head morph editor to the other builders, as well as covering a few handy spreadsheets he put together to visually reference the multitude of options in some of the editor’s sliders. My thanks for Tim for covering this – having a builder able to do a session like this is incredibly rewarding for us to see, and he pulled it off brilliantly.

And just like that the end of the project time came on the 3rd day. The teams scrambled to export their content from the toolset into a game friendly single package file for players, this was moved on to a PC with the game on it and we headed to a small theatre room where each builder team would demo each of their modules running in the game.

Fernando Melo is the Dragon Age Online Producer with 15 years of game industry experience and leads the team responsible for everything Dragon Age post release including a fantastic dowloadable content plan, the toolset community of builders and a number of features that tie the game with the website in ways that will make your kidney detonate with glee. His last name is actually pronounced ‘mellow’ which is pretty cool.