Part 4 of 4, by Jay Watamaniuk

One of the biggest gaming events of the year has come and gone but left an impressive array of game trailers, demos and thoughts from reviews on what the gaggle mysterious developers have in store.

BioWare and the good Doctors get a call-out:

Thunderbolt
“Though hard at work on some of the highest-profile games at the show, the Drs. were able to spare some time to comment on the evolution of games, the “are games art” debate and to discuss some of their upcoming products.”

Kotaku
“If you don’t want to know anything about Mass Effect 2, don’t read more. But if you’re curious about just how dangerous this new game is….”

Joystiq
“BioWare dropped us into the role of a Soldier-class Commander Shepard and set us loose upon several waves of robotic and human combatants, as we traversed a few outdoor corridors. Our first thought was, uh-oh, Shepard’s still stiff on his feet (loosen up, guy, you move like a tank). But as we pressed up against the first barrier (cover is actually useful!), and rose up our assault rifle, taking aim down sights, it all clicked.”

Team Xbox
“There are a handful of video games that the industry consensus deems revolutionary. Such is the case for Bioware’s Mass Effect,”

GameSpy
“Dragon Age Origins is a game that gets the role-playing gamer in me giddy with anticipation. It’s a return to BioWare’s roots, the spiritual successor to Baldur’s Gate. It’s a way for BioWare to tell new stories in the fantasy milieu without being limited by the established history and mechanics of Dungeons & Dragons. It’s being called an epic tale of violence, lust, and betrayal. It just so happens that my E3 demo covered all three of these aspects of the game.” 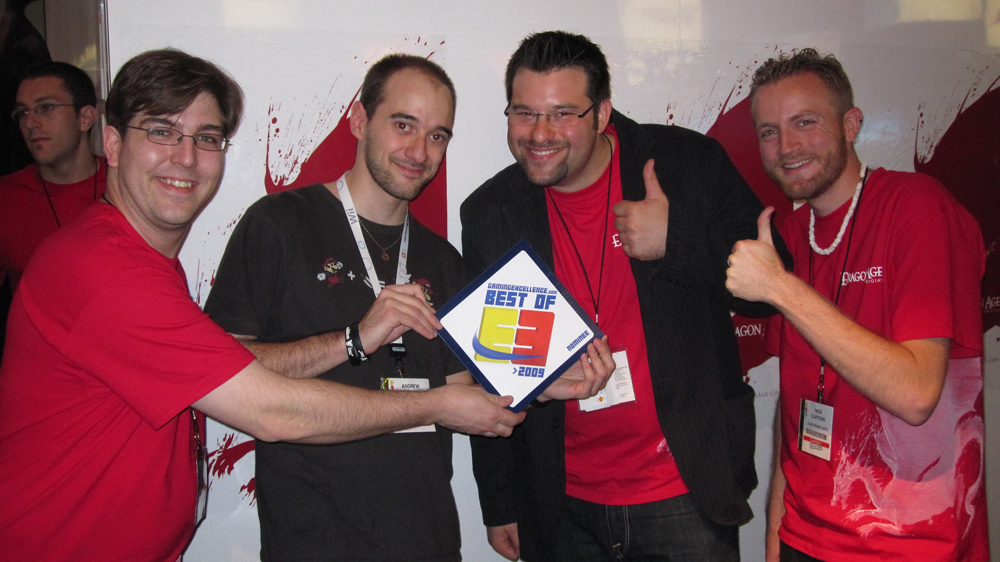 Violence, lust and betrayal picks up a sweet E3 nomination. In Canada, a perky thumbs up means I’ll stab your momma. We don’t kid around up north.