In the Part 1 of the Technology of Dragon Age II blog we covered base improvements to the Dragon Age II technology. In this article we’ll examine how higher end PC GPUs can enable additional visual features which further improve the overall visual quality of the game.

One of the major goals of the team was to make the game look great on all platforms. Having accomplished that, we started researching what additional features we can offer to our users that have invested on higher end PC hardware. The latest PC GPUs that have been recently released on the market are very powerful. DirectX 11 technology is a great way for us to target this advanced GPU hardware, as DirectX 11 is fully backwards compatible with DirectX 10. So if you have a video card that supports DirectX 10, DirectX 10.1 or DirectX 11, and Windows Vista SP2 or Windows 7, you’ll be able to benefit from additional technology features as described in this post.

As we already mentioned in the previous post, the base lighting system was designed to work well with all the systems the game runs on. On high end PCs, we can take advantage of the extra power of current generation GPUs to do more. 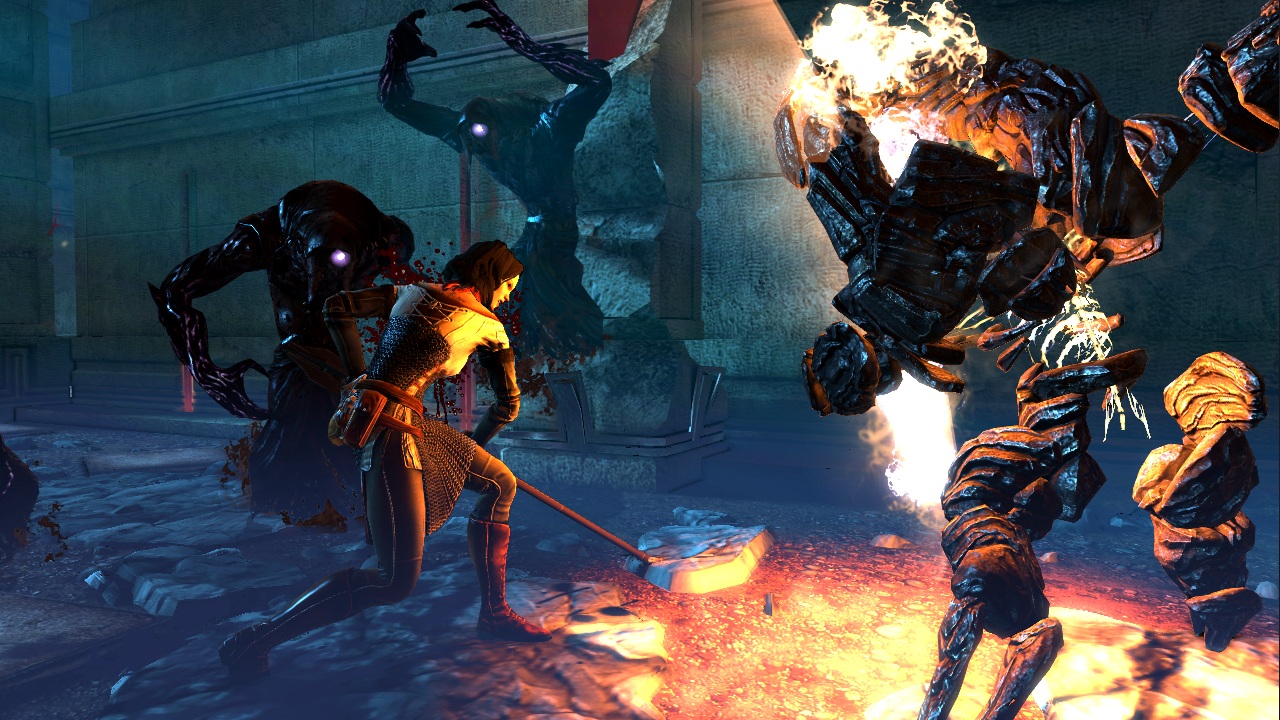 The game has hundreds of spell effects, the rendering of which is greatly improved on high end PC video cards. On the high detail setting (requires DX10 or better hardware), the game will smooth particle edges so they blend better with the environment (without hard edges at the contact point). 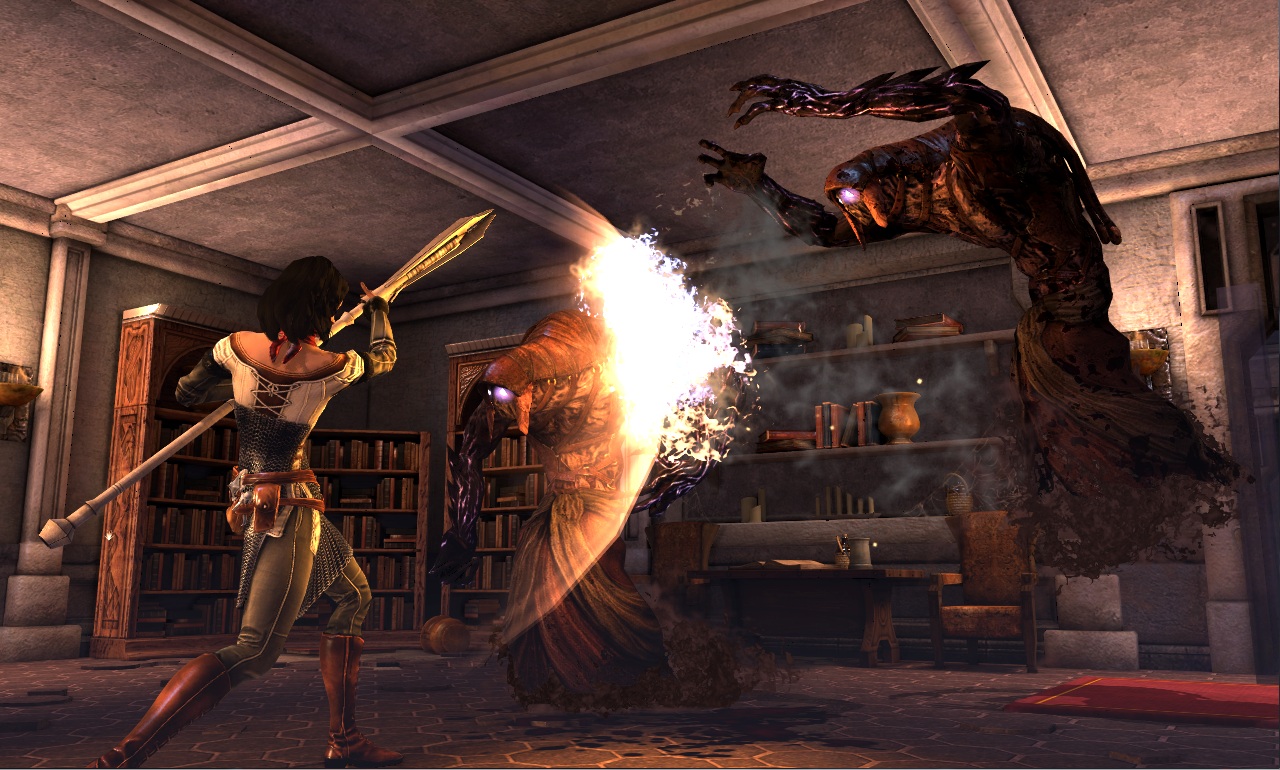 One of the major features of the DirectX 11 version is that the dynamic lighting for spell effects has been completely redone. While our base rendering technology supports 2-3 dynamic lights per visual effect, the DirectX 11 renderer supports hundreds of dynamic lights. Our artists have used that feature to great extent by attaching numerous small lights to spell effects that are expected to emit light (for example, fire and lighting effects). This is a great feature that significantly improves the visual impact of some of the most important spells in the game. 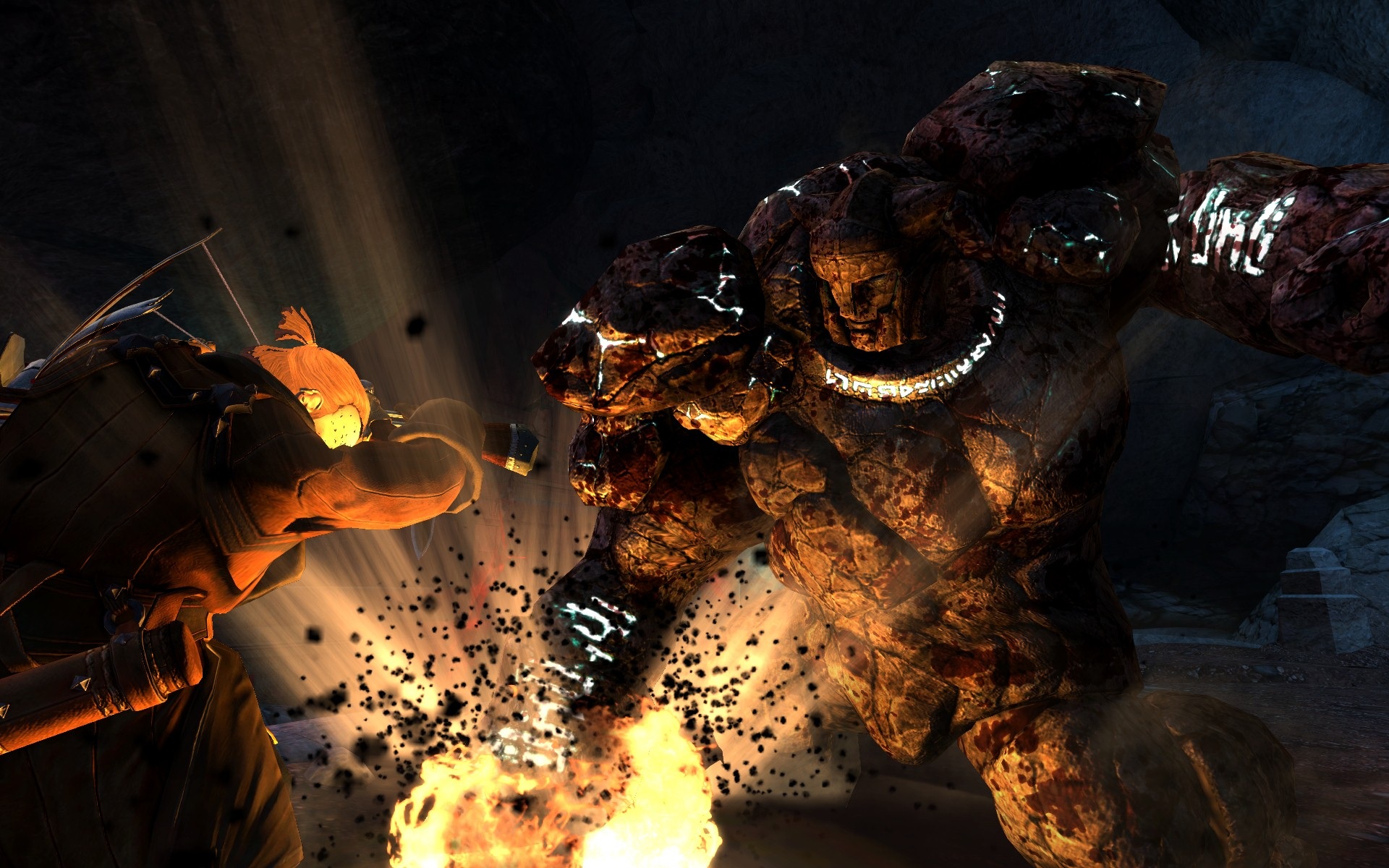 In addition, certain lighting effects will also add additional shadows to the scene. For example, when casting a fireball to a group of enemies, players will see shadows from all enemies. This looks great especially on indoor scenes.

On exterior levels, moving cloud shadows add an extra layer to the visuals.

Most of the dynamic lighting features, including cloud shadows and the extra lights on spell effects, will work on DirectX 10 hardware. The extra shadows from dynamic lights require the very high detail level (which is only available with DirectX 11 hardware). 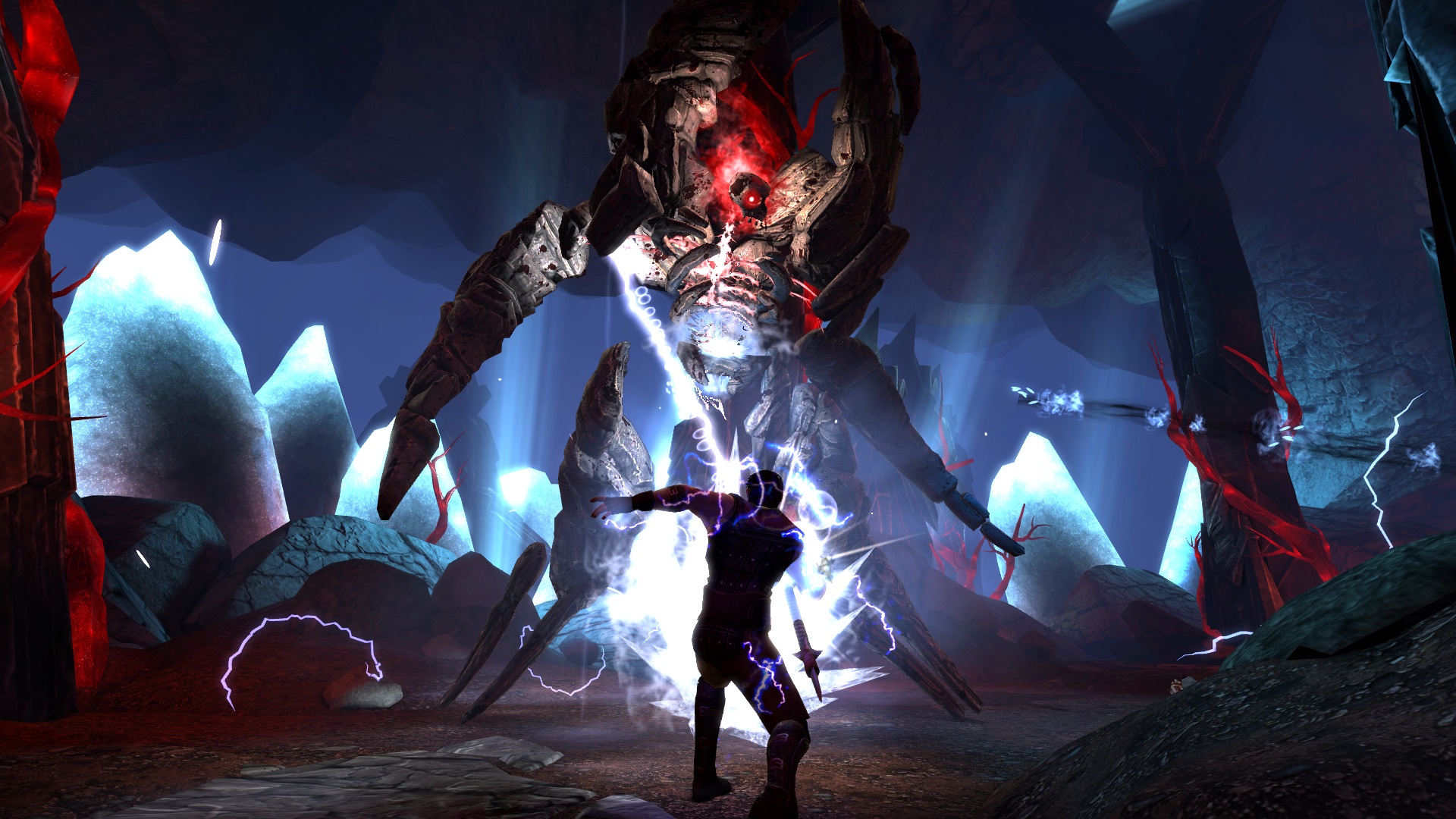 Tessellation is a major feature of the DirectX 11 API. Dragon Age 2 uses tessellation on the terrain to smooth out shillouette terrain edges that can occationally look sharp on DirectX 9. In addition the Dragon Age 2 engine supports displacement mapping techniques to increase the detail of certain surfaces like walls, floors and pillars. This feature adds microscopic details and makes those surfaces look much more detailed and textured. 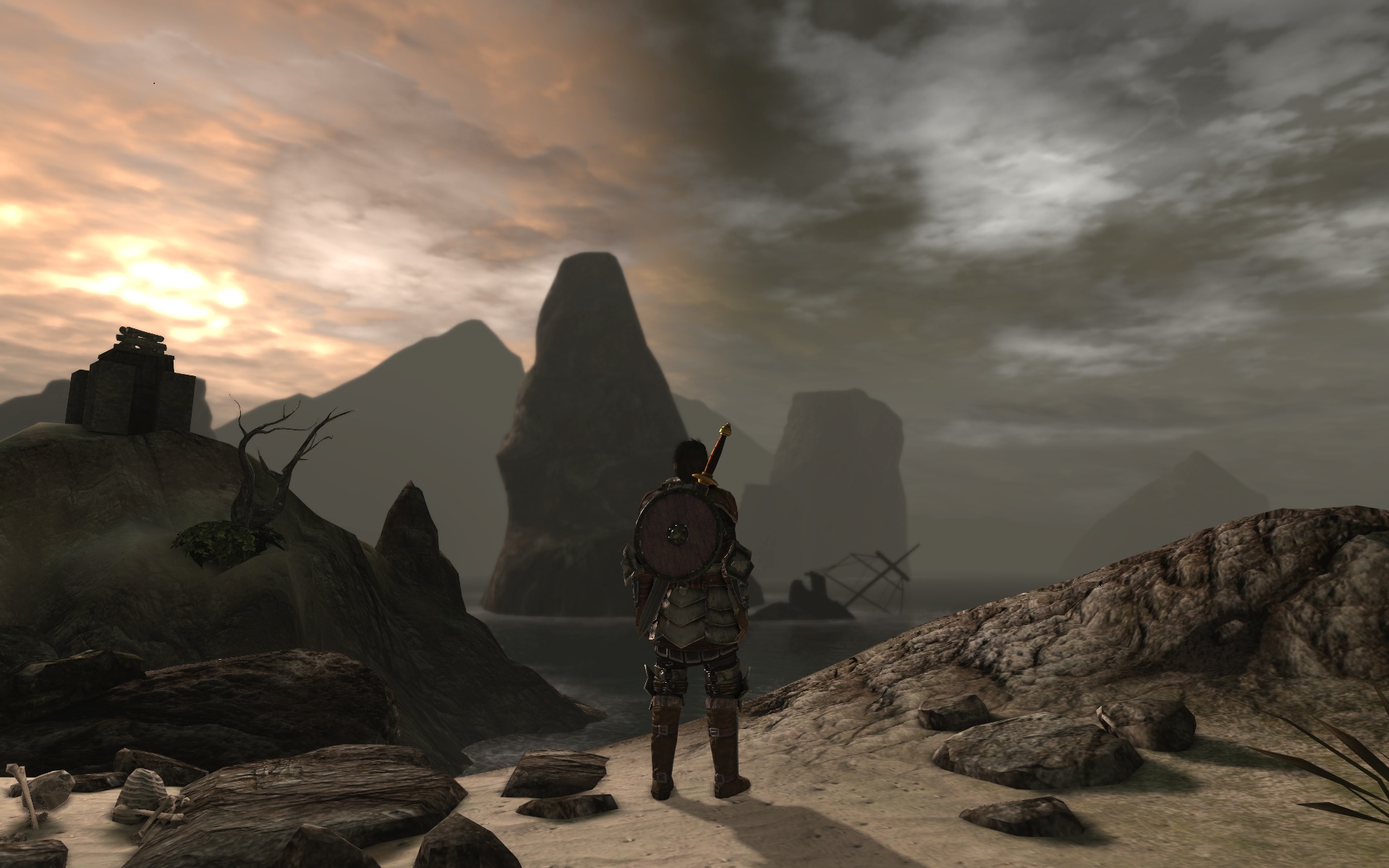 Screen space ambient occlusion adds self shadow details to all objects in a scene and is a great complement to the base lighting system. It looks particularly good when combined with varying city architecture, and because Dragon Age 2 is focusing on the city of Kirkwall, there are a large number of areas that take advantage of this effect throughout the game. 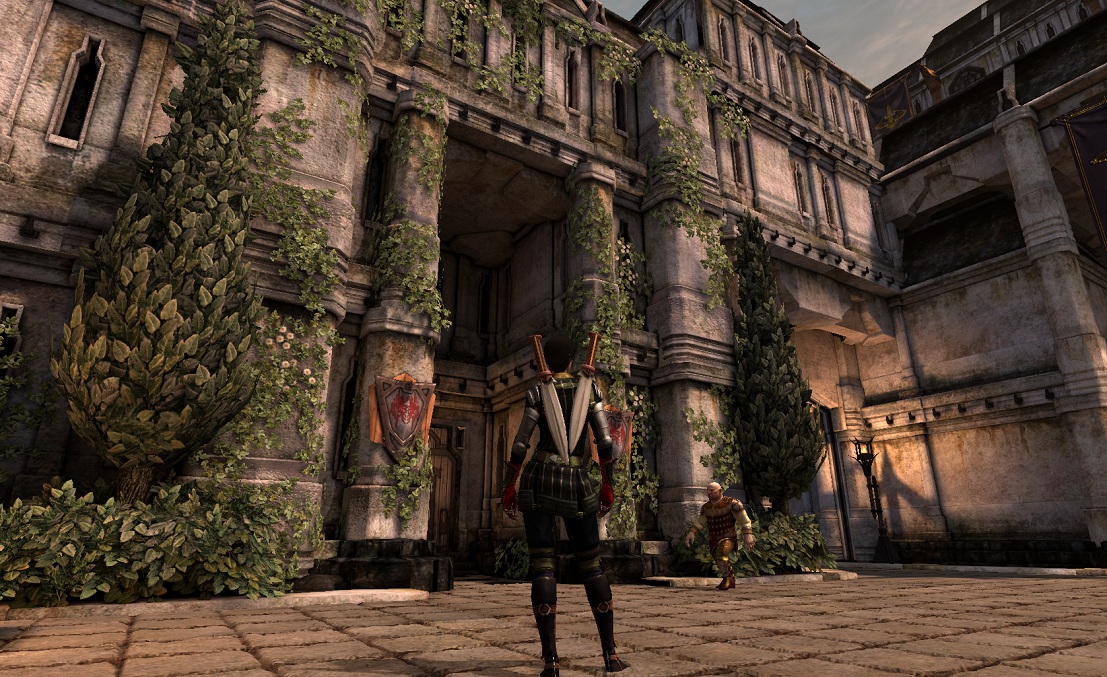 An optional visual feature for players with DirectX 11 hardware is our new diffusion depth of field effect. This effect is active during normal gameplay and it is used to blur objects very close to the camera, as well as put objects in the distance slightly out of focus. Visually this works great with distance fog, and gives vista shots a more convincing look.