It was pretty cool when we were allowed to mention that the fine folks over at Green Ronin publishing were doing up a table top version of Dragon Age. I confess I have not seen any of the rules yet for the game but these guys do great work and I’m keen to put on my gamer hat (tall and pointy with stars and moons) and see what they can do with the world.

I played Dungeons and Dragons almost exclusively for the longest time with the occasional dalliance with Villains and Vigilantes (two of my of fav artists/game designers back in the day were Jeff Dee and Bill Willingham). 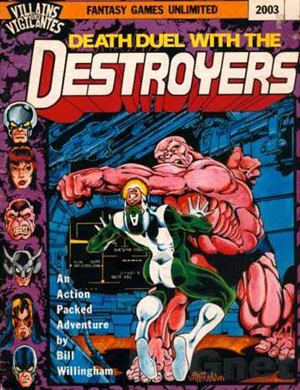 I also had a few trysts with Gamma World, Traveller, and a game my brother created which got him a job here and BioWare which a group of us played for years and years. I went through a period where I did not play a lot of table top games (I called that ‘university’) but in my recent adult life have embraced my table top gamerness once again. In the last 6 or 7 years I have been introduced to Earth Dawn, Shadowrun , Legend of the Five Rings, FATE, All Flesh Shall Be Eaten and a one-shot game I can’t recall the name of where my nervous, washed out character had the ability, when all hope was lost, to black out and summon Baba Yaga. Just try and call that boring.

Even looking at pictures of those old rule systems brings back a huge part of growing up.

Death Duel with the Destroyers cover art taken from RPGnet